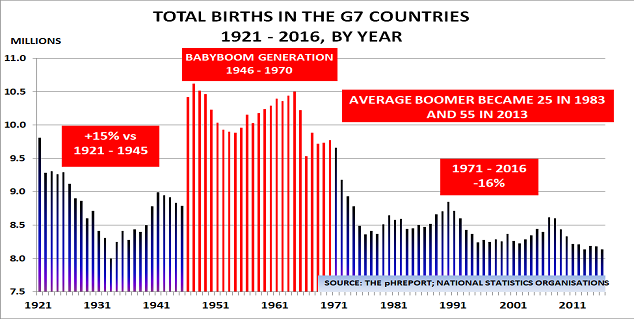 While Western stock markets boom under the influence of central bank money-printing, wages for ordinary people are not doing so well.  So it is no wonder that Populism is rising, as voters worry their children will be worse off than themselves at a similar age.

The chart above is the key to the story.  It shows births in the G7 countries (Canada, France, Germany, Italy, Japan, UK, USA) since 1921.  They are important as until recently, they represented around 50% of the global economy.  Equally important is the fact that consumer spending represents 60% – 70% of total GDP in each country.

As the chart shows, the absolute number of consumers saw a massive boost during what became known as the BabyBoom after the end of World War 2:

Today’s dominant economic theories were also developed during the BabyBoom period, as academics tried to understand the major changes that were taking place in the economy:

Today’s problem is that although both theories appeared to fit the facts when written, they were wrong.

We cannot blame them, as nobody during the 1960s realised the extraordinary nature of the BabyBoom.  The word “BabyBoom” was only invented after it had finished, in 1970, according to the Oxford English Dictionary. 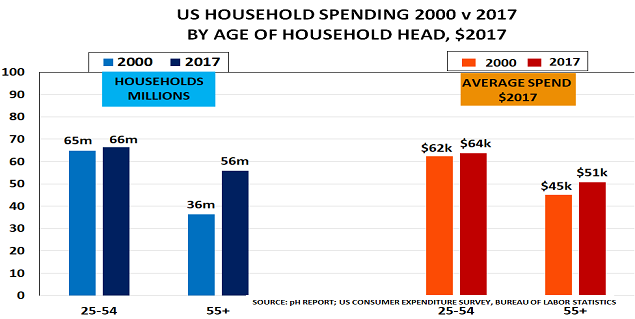 Friedman had no way of knowing that the number of US babies had risen by such an extraordinary amount.  As these babies grew up, they created major inflation as demand massively outgrew supply.  But once they entered the Wealth Creator 25 – 54 age cohort in large numbers and began working, supply began to catch up – and inflation to fall.

Similarly, Modigliani had no way of knowing that people’s spending began to decline dramatically after the age 55, as average US life expectancy during the BabyBoom was only around 68 years.

But today, average US life expectancy is over 10 years higher.  And as the second chart shows, the number of households in the 55+ age group is rocketing, up by 55% since 2000.  At 56m, it is fast approaching the 66m households in the critical Wealth Creator cohort, who dominate consumer spending:

“Practical men who believe themselves to be quite exempt from any intellectual influence, are usually the slaves of some defunct economist. Madmen in authority, who hear voices in the air, are distilling their frenzy from some academic scribbler of a few years back”. 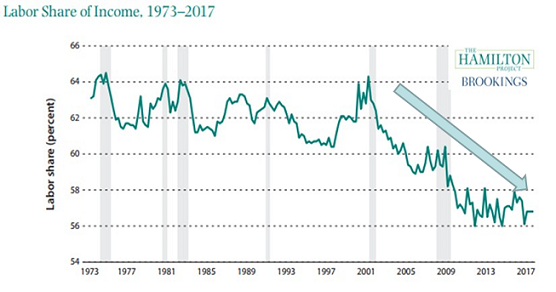 The result is seen in the third chart from the Brookings Institute.  It highlights how labour’s share of income has collapsed from 64% in 2000 to 57% today.  The date is particularly significant, given that the oldest Boomers (born in 1946), reached 55 in 2001 and the average US Boomer became 55 in 2010.

But fewer Americans own stocks than houses – only 54% versus 64% for homes.  So “printing babies” cannot work.

The real issue is that the dramatic increase in life expectancy has created a paradigm change in our life cycle:

This transition would have been a difficult challenge to manage at the best of times. And having now gone in the wrong direction for the past 15 years,  we are, as I warned last year, much closer to the point when it becomes:

“Obvious that the Fed could not possibly control the economic fortunes of 321m Americans. Common sense tells us that demographics, not monetary policy, drive demand. Unfortunately, vast amounts of time and money have been wasted as a result. The path back to fiscal sanity will be very hard indeed.”