by Paul Hodges on 4th December 2017 in Economic growth
SHARE THIS STORY
China is no longer seeking ‘growth at any cost’, with global implications, as I describe in my latest post for the Financial Times, published on the BeyondBrics blog 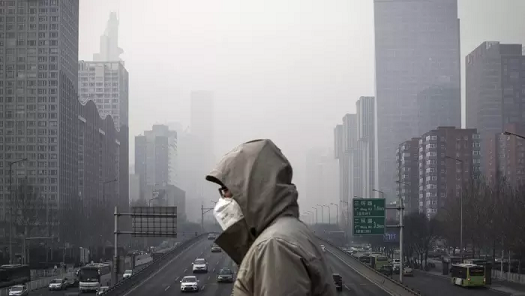 A pedestrian covers up against pollution in Beijing © Bloomberg

He focused on the first threat, from corruption, by appointing an anti-corruption tsar, Wang Qishan, who toured the country gathering evidence for trials as part of a high-profile national campaign.

More recently, Mr Xi has adopted the same tactic on an even broader scale to tackle the second threat, pollution. Joint inspection teams from the Ministry of Environmental Protection, the party’s anti-graft watchdog and its personnel arm have already punished 18,000 polluting companies with fines of $132m, and disciplined 12,000 officials.

The ICIS maps below confirm the broad nature of the inspections. They will have covered all 31 of China’s provinces by year-end, as well as the so-called “2+26” big cities in the heavily polluted Beijing-Tianjin-Hebei area.

The inspections’ importance was also underlined during October’s five-yearly People’s Congress, which added the words “high quality, more effective, more equitable, more sustainable” to the Party’s Constitution to describe the new direction for the economy, replacing Deng’s focus from 1977 on achieving growth at any cost.

It is hard to underestimate the likely short and longer-term impact of Mr Xi’s new policy. The Ministry has warned that the inspections are only “the first gunshot in the battle for the blue sky”, and will be followed by more severe crackdowns.

In essence, Mr Xi’s anti-pollution drive represents the end for China’s role as the manufacturing capital of the world.

The road-map for this paradigm shift was set out in March 2013 in the landmark China 2030 joint report from the World Bank and China’s National Development and Reform Commission. This argued that China needed to transition “from policies that served it so well in the past to ones that address the very different challenges of a very different future”.

The report focused on the need for “improvement of the quality of growth”, based on development of “broader welfare and sustainability goals”.

However, little was achieved on the environmental front in Xi’s first term, as Premier Li Keqiang continued the Populist “growth at any cost” policies of his predecessors. According to the International Energy Agency’s recent report, Energy and Air Pollution, “Average life expectancy in China is reduced by almost 25 months because of poor air quality”.

But as discussed here in June, Mr Xi has now taken charge of economic policy. He is well aware that as incomes have increased, so China is following the west in becoming far more focused on ‘quality of life issues’. Land and water pollution will inevitably take longer to solve. So his immediate target is air pollution, principally the dangerously high levels of particulate matter, PM2.5, caused by China’s rapid industrialisation since joining the World Trade Organization in 2001.

As the state-owned China Daily has reported, the Beijing-Tianjin-Hebei region is the main focus of the new policy. Its high concentration of industrial and vehicle emissions is made worse in the winter by limited air circulation and the burning of coal, as heating requirements ramp up. The region has been told to reduce PM2.5 levels by at least 15% between October 2017 and March 2018. According to Reuters, companies in core sectors including steel, metal smelting, cement and coke have already been told to stagger production and reduce the use of trucks.

The chemicals industry, as always, is providing early insight into the potentially big disruption ahead for historical business and trade patterns:

Investors and companies must therefore be prepared for further surprises over the critical winter months as China’s economy responds to the anti-pollution drive. The spring will probably bring more uncertainty, as Mr Xi accelerates China’s transition towards his concept of a more service-led “new normal” economy based on the mobile internet, and away from its historical dependence on heavy industry.This paradigm shift has two potential implications for the global economy.

One is that China will no longer need to maintain its vast stimulus programme, which has served as the engine of global recovery since 2008. Instead, we can expect to see sustainability rising up the global agenda, as Xi ramps up China’s transition away from the “policies that served it so well in the past”.

A second is that, as the chart below shows, China’s producer price index has been a good leading indicator for western inflation since 2008. Its recovery this year under the influence of the shutdowns suggests an “inflation surprise” may also await us in 2018. 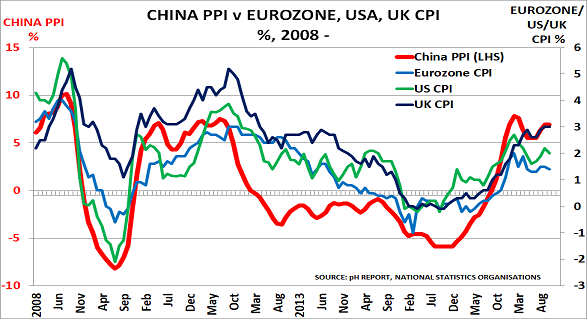 ‘What is this block of waste plastic doing on an Arctic ice-floe’, t...