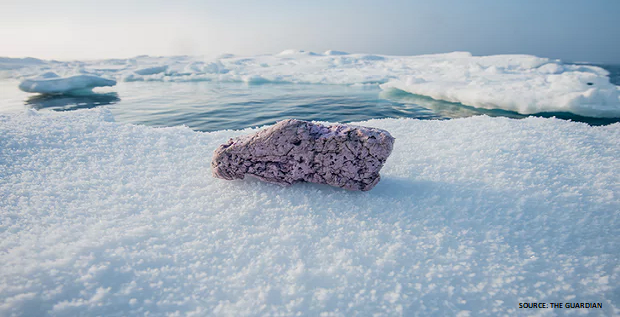 ‘What is this block of waste plastic doing on an Arctic ice-floe’, thousand of miles from where it was manufactured?  Even more worrying is the question, ‘what will happen to it next?’  As David Attenborough’s ‘Blue Planet II‘ programmes have shown, plastic can break down into micro-particles after it has been used.  And these micro-particles can then enter the food chain and the water supply:

Now governments are starting to take action, with last week’s UN meeting of environment ministers formally agreeing that “the flow of plastics into the ocean must be stopped”.  As the official Conference statement noted:

“We have been so bad at looking after our planet that we have very little room to make more mistakes…. we are sending a powerful message that we will listen to the science, change the way we consume and produce, and tackle pollution in all its forms across the globe.”

As I noted back in July at the launch of a major Study on waste plastic:

“Nobody is claiming that this waste was created deliberately. Nobody is claiming that plastics aren’t incredibly useful – they are, and they have saved millions of lives via their use in food packaging and other critical applications. The problem is simply, ‘What happens next?’ As one of the Study authors warns:

““We weren’t aware of the implications for plastic ending up in our environment until it was already there. Now we have a situation where we have to come from behind to catch up.””

We also know how this story will end, because we have seen it played out many times over the past 75 years.

As the photo on the left shows from 1953, most major Western cities used to be covered in smog during the winter, with people routinely wearing masks to try and protect themselves.  The same is still true today in China and many cities in the Emerging Markets, as the photo on the right confirms.

The simple fact is that as societies become richer, people become more demanding about the quality of their lives.  It is no longer enough to tell them that they are lucky to be alive, and to have some food to eat and water to drink.  We can see the same development in China today, where President Xi knows that he has to tackle pollution, if the Communist Party wants to stay in power.  As I noted last week:

“Joint inspection teams from the Ministry of Environmental Protection, the party’s anti-graft watchdog and its personnel arm have already punished 18,000 polluting companies with fines of $132m, and disciplined 12,000 officials.”

“For those areas that have suffered ecological damage, their leaders and cadres will be held responsible for life,” said Yang Weimin, the deputy director of the Communist Party’s Office of the Central Leading Group on Financial and Economic Affairs. “Our people will be able to see stars at night and hear birds chirp.” 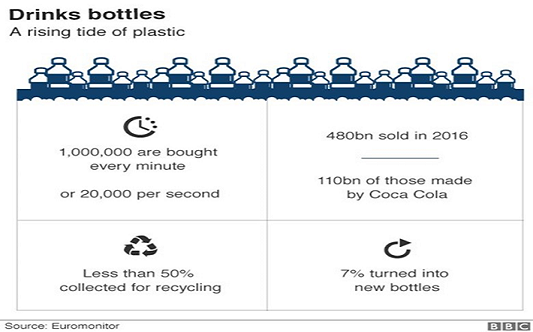 Smart companies and investors in the plastics industry already know “business as usual” strategies are no longer viable.  Instead, they are starting to map out the enormous opportunities that these changes will create.

The issue is simply that plastic waste is no longer just seen as being unsightly.  It is now recognised as a major environmental hazard. As the 3rd chart shows, 480bn plastic bottles were sold in 2016 around the world, but only 7% were recycled.  This waste is becoming unacceptable to public opinion. As a result, the UK government is now considering a tax or ban on all single use items.

Equally important is that the momentum for change has been building for a decade, as one can see from a look back over some of my posts on plastic bags:

Globalisation was the great trend of the past 30 years, and it changed the world very profoundly.  Today, the focus is on sustainability and the development of the circular economy.

It is an exciting time for people who want to solve the problem of plastics pollution by thinking “out of the box”, and developing the more service-driven businesses of the future.

China is no longer seeking ‘growth at any cost’, with global implica...

Chart of the Year: Bitcoin, the logical end for stimulus policies