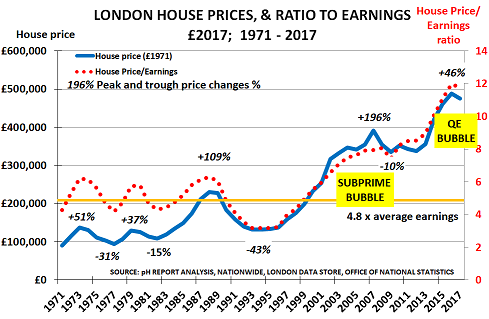 2000 should have been the natural end of the BabyBoomer-led economic SuperCycle. The oldest Boomer (born in 1946) was about to leave the Wealth Creator 25 – 54 age group that drives consumer spending and hence economic growth.  And since 1970, Boomer women’s fertility rates had been below replacement level (2.1 babies/woman).  So relatively fewer young people were joining the Wealth Creator generation to replace the Boomers who were leaving.

But instead, central banks decided that demographics didn’t matter.  They believed instead that monetary policy could effectively “print babies” and create sustainable demand.  So instead of worrying about financial stability – their real role – they aimed to stimulate the economy by boosting financial asset prices – primarily shares and housing markets.

London’s housing market was a key target as the Bank of England’s Governor told Parliament in March 2007:

“When we were in an environment of global economic weakness at the beginning of the decade, it meant that external demand was declining… We knew that we had pushed consumption up to levels that could not possibly be sustained in the medium and longer term. But for the time being if we had not done that the UK economy would have gone into recession… That pushed up house prices and increased household debt. That problem has been a legacy to my successors; they have to sort it out.”

But instead, when the Subprime Bubble burst, policymakers did even more stimulus via Quantitative Easing (QE).

Now, however, the Stimulus Bubble is ending and a “perfect storm” is developing as 3 key myths are exposed: 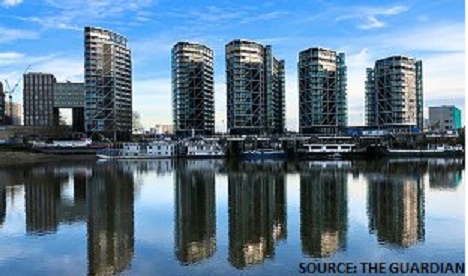 The end of the ‘London is a global city’ myth.  The house price/earnings ratio averaged 4.8x between 1971-1999.  But it then took off into the stratosphere to reach 11x today, as the myth grew that Londoners weren’t relevant to the housing market.  Instead, it was said that London had become a “global city” where foreigners would set the price.

Chinese and Asian buyers boosted this myth as vast new apartment blocks were sold off-plan in the main Asian cities – often to buyers who never even visited their new “home”.  But the myth ended last year when China introduced severe capital controls – capital outflows collapsed from $640bn in 2016 to just $60bn in 2017.

The scale of the this retreat is overwhelming as The Guardian reported recently:

“The total number of unsold luxury new-build homes, which are rarely advertised at less than £1m, has now hit a record high of 3,000 units, as the rich overseas investors they were built for turn their backs on the UK due to Brexit uncertainty and the hike in stamp duty on second homes….

“Henry Pryor, a property buying agent, says the London luxury new-build market is “already overstuffed but we’re just building more of them.  We’re going to have loads of empty and part-built posh ghost towers. They were built as gambling chips for rich overseas investors, but they are no longer interested in the London casino and have moved on.””

The end of the buy-to-let mania.   Parents of students going away to college began this trend in the mid-1990s, as they bought properties for their children to use, rather than rent from poor quality landlords.  After the dotcom crash, many decided that “bricks and mortar” were a safer bet than shares, especially with the major tax breaks available.

Banks were delighted to lend against an asset that was supported by the Bank of England, finding it far more attractive than lending to a business that might go bust.  And so parents held on to their investments after their children left college – further reducing the amount of housing available for young people to buy.  But as The Telegraph reports:

“Buy-to-let investors now face tougher conditions. A weakening housing market, tough new legislation and the tightening of affordability checks by lenders are but a few problems causing landlords to run for the hills.  According to the National Landlords Association, 20% of landlords plan to sell one or more of their properties in the next 12 months.”

Interest rates will never rise.  Of course, the key to the Subprime and QE Bubbles was the Bank’s decision to collapse interest rates to stimulate the economy.  Monthly payments became much more affordable – and ever-rising prices meant there was no longer any need to worry about repaying the capital.

But some people still couldn’t afford to buy even on this basis, and by 2007 around 30% of mortgages were “interest-only” with no capital repayment at all.  These buyers should have been forced sellers when the Subprime Bubble burst; prices would then have returned to more normal levels.  But instead, the Bank of England stepped in again, as the Financial Times has reported:

“During and after the 2008 financial crisis Britain’s mortgage lenders took a more tolerant approach to non-payers through the use of forbearance ….at the height of the housing market troubles in 2011 Bank of England research suggested that as many as 12% of all UK residential mortgages were in some form of forbearance.  This helped prevent the downturn from developing into a 1990s-style crash, the Bank suggested.”

PRICES WOULD FALL 60% IF THE HOUSE PRICE/EARNINGS RATIO “REVERTS TO MEAN”
All “good things” come to an end, of course. And the London property bubble is probably no exception. Its 3 key drivers are now all reversing, and there seems little sign of any new factors that might help to keep the bubble inflating.

The risk is that interest rates continue to rise, forcing many owners to sell and bursting the Stimulus Bubble.  UK 10-year rates have already trebled from their 0.5% low in Q3 2016.  Most rates seem likely to go much higher now the 30-year downtrend has been broken, as I discussed last week.

Today’s high prices will also make it difficult for sellers to find local buyers, as the number of homes being bought/ sold each year has fallen 25% since the 2007 peak.  Most young people cannot afford to buy.  And if many people do decide to sell, potential buyers might panic, causing the slump to continue for many years – as happened before 2000.

Nobody knows how low prices might go, if they start to fall.  But ‘reversion to mean’ is usually the best measure.  If this happened, today’s average London home, selling at 4.8x earnings, would cost £193k – a 60% fall from 2017’s average price of £475k.  This figure also highlights the risk that policymakers’ denial of demographic realities has created.