One of the best things I learned at school was the simple mnemonic:

“To ASSUME can make an ASS of U and ME”

Unfortunately, most of those involved in the UK’s Brexit debate have failed to remember it.  As a result, it seems likely that the UK will end up leaving the European Union on 31 October with No Deal. 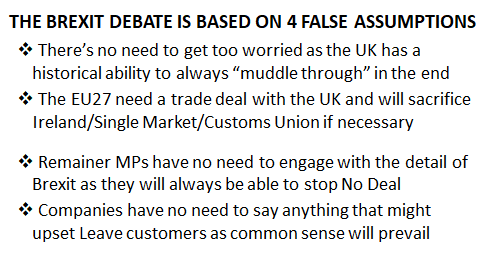 The problem comes down to the set of false assumptions summarised in the slide above:

These are all arguments that have been heard everyday for the past 3 years.  The problem is that they are simply wishful thinking, and yet are never challenged. 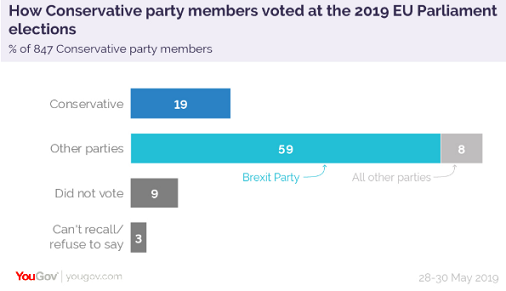 The success of the Brexit Party in the European elections makes it almost certain that the next Tory leader will be a hard-line Brexiter.  As the chart shows from YouGov polling, most Conservative Party members (who will make the final decision) actually voted for the Brexit Party rather than the Conservatives in the election.

Similarly, it seems highly likely that No Deal will be the base case for most Tory leadership hopefuls.  And the position of Boris Johnson as front-runner is very clear, as the Leave.UK poster confirms.

Given that the leadership election is already underway, we also know how events will likely play out:

After that, either the new EU Commission will make a hurried phone call, saying it is all a terrible mistake.  Or the UK will find that 31 October was just “the end of the beginning”, and will instead start the lengthy process of negotiating a free trade agreement – whilst the EU implements their Preparations for a No Deal Brexit..

THE TIMETABLE FOR AVOIDING NO DEAL IS VERY SHORT
The key issue, as the independent Institute for Government (IfG) has noted, is that:

“A new prime minister intent on No Deal Brexit can’t be stopped by MPs.”

It is also clear from recent statements from Labour leader, Jeremy Corbyn, that he continues to regard a second referendum as very much a last resort, as The Guardian reported last week:

“Speaking in Dublin, the Labour leader said the only way to break the deadlock would be a general election or a second referendum after negotiating a softer Brexit deal with Brussels.”

Corbyn knows very well that a new Tory premier is most unlikely to seek a “softer Brexit deal”, and he also knows that it would be impossible to negotiate a new deal before 31 October.  It would be almost impossible even to organise a General Election before 31 October, as the IfG have also explained:

This tight timetable also raises an unanswered question as to when the vote of confidence would actually be tabled, if parliament is in recess?

Wishful thinking and wrong assumptions have dominated the Brexit debate. So there is little reason to assume anything will now stop the UK leaving on 31 October, in time for Halloween celebrations.

Afterwards, of course, everyone will be free to blame everyone else for “not making it clear what would happen”.  But that is always the result when wishful thinking is involved.