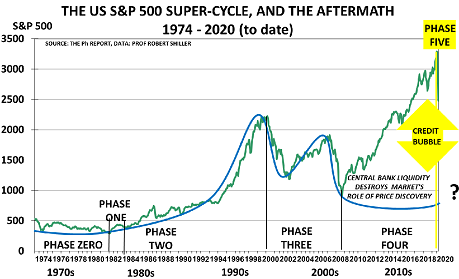 Many companies and investors are still comparing today’s downturn to the 9-month hiccups seen after the 1990/91 Gulf War and the 2000/1 dotcom crash. In reality, however, this is wishful thinking, as the IMF highlighted last week in its World Economic Outlook:

“The Great Lockdown: Worst Economic Downturn Since the Great Depression”

One key question, of course, is whether Covid-19 is itself the key risk – or is it instead acting as the catalyst for a major structural change?

Our analysis focuses on the US  S&P 500 – the world’s leading stock index. It starts with the structural changes that began after the 1974 oil price crisis highlighted in the chart. It then focuses on (a) the BabyBoomer SuperCycle from 1983-2008 and (b) then the credit bubble created since 2008 by central banks in their effort to essentially ’print babies’.

The key issue for today is that the world has now lost the demographic dividend created by the vast Boomer population, as they moved into the high-spending Wealth Creator 25-54 cohort. It is instead having to confront the realities of the demographic deficit created by their move into the low spending Perennials 55+ cohort. There is no historical precedent for this development.

The Boomers are the first generation in history to have an average life expectancy beyond the age of 65. A century ago, when the pension was invented, life expectancy averaged just 46 in the West – and only 26 elsewhere.

The analysis suggests that our adult lives have been dominated by the key Phases highlighted in the second chart in respect of the Boomers’ impact, as the largest and wealthiest generation that the world has ever seen:

Phase Zero. 1974’s Arab Oil Embargo took the S&P to an inflation-adjusted low of 335 in December, and it stayed in the “Quiescent” stage till 1982, bottoming at 291
Phase 1. The “Improvement” stage then took markets into an initial recovery
Phase 2 began in 1983, and saw “Confidence” increase as the demographic dividend created by the Boomers’ move into the Wealth Creator 25-54 cohort developed. The average Western Boomer (born 1946-70) joined the cohort in 1983, and all the Boomers were in the cohort between 1995-2000. They created unstoppable growth in demand, and powered a record rise in the stock market as their pension savings were invested. Real estate also boomed as many settled down and had families.
Phase 3 continued this “Prosperity” after the minor recession of 2000/1, even though the oldest Boomers were starting to join the Perennials 55+ cohort – where spending slows, incomes reduce, and shares start to be sold to fund pension income. Sadly, the US Federal Reserve failed to recognise this demographic demand deficit, and instead created the subprime crash with its first stimulus campaign to artificially boost housing/auto markets,.
Phase 4 saw the major central banks ‘double up’ on the Fed’s failed stimulus programmes, creating “Excitement” whereby the fundamentals of supply/demand were ignored in favour of “Fed-watching” and the habit of ‘Buy on the dips’, in anticipation that the Fed would never let markets fall again. Foreign buyers dominated Western housing markets seen as ‘safe havens’, often buying “off-plan”.
Phase 5 is now in its early stages of “Convulsion”, with the bursting of the credit bubble already underway. The fall in oil prices will inevitably lead to deflation, pushing up the real cost of debt for the first time in the Boomers’ lifetime, and so collapsing house prices. Asset markets will have to rediscover their true rule of price discovery, which will likely lead to wealth destruction
Phase 6 will then see “Pressure” end the cycle, with potentially a risk of a return to “Quiescence” due to the debt built up by he central banks’ failed attempts to ‘print babies’.

The problem is that we have all wanted to believe that, somehow, the academics and investment bankers running central banks can control the economic fortunes of the world’s 7.8bn people. But common sense tells us this is fantasy.

Demographics drive demand, not central banks, as the Covid-19 crisis has confirmed. They have printed $tns of cash, but this has not created demand – for the simple reason that people are locked-down in their homes. Instead, all they have achieved is to create yet another asset bubble in financial markets.

The next few years are therefore likely to be spent in picking up the pieces from their hubris.

The head of the IMF has warned again on the likely scale of the economic depress...

Something quite dramatic is happening in the global economy.  Of course, Wall S...