(Picture credit Shutterstock)
A.  Article 50 of the Lisbon Treaty set out the rules for leaving the European Union. As with most negotiations, it assumed the leaving country would present its proposals for the post-withdrawal period – which would then be finalised with the other members. But the UK government has little experience of trade negotiations, as these have been done by Brussels since 1973. It naively assumed that it had simply to set out its objectives, and wait for the clock to tick down.
B.  ‘Brexit means Brexit’, has been the UK’s core statement since Article 50 was tabled. But as we noted back in September 2016, Brexit can actually mean a variety of different outcomes – and they have very different implications. At one extreme, the ‘Norway model’ is very similar to full EU membership, but with no say on EU decisions. Whereas the ‘Canada model’ is simply a free-trade agreement offering some access to the Single Market for goods, but less access for services (which are 80% of the UK economy). A ‘No Deal Brexit’ means working under WTO rules with arbitrary tariffs and regulations.
C.  The European Commission manages the day-to-day business of the European Union on behalf of the European Council, and is effectively its civil service. Its president is Ursula von der Leyen and she re-appointed Michel Barnier to lead the post-Brexit negotiations. As with the earlier negotiations, the UK allowed Barnier to gain “first mover advantage”, and effectively control the scope of the negotiation, by finalising and publishing the EU’s own negotiating objectives.
D.  The Default date for the UK to exit the Transition period is 31 December 2020. It had been agreed this could have been extended for a further 2 years, if the UK had requested this before the end of June – but the UK government refused to do this, despite being in the middle of the Covid-19 pandemic. The UK stance gave the EU a very strong position, as it meant they effectively controlled the timetable as well as the scope of the negotiations.
Barnier had originally suggested they had “3 Brexit goals for 2020: to maintain a capacity to cooperate closely at the global level; to forge a strong security partnership; and to negotiate a new economic agreement (which, most likely, will have to be expanded in the years to come).” But, of course, the pandemic soon took top priority for the EU, with its second priority being the new Green Deal and the need to ensure a positive outcome for the UN Climate Change Conference in Glasgow in November.
This meant that Brexit dropped down to third position, competing with other critical geo-political issues – relationships with the US and China, the Iran nuclear deal etc – for attention. These developments, together with the UK’s seemingly ‘take it or leave it’ approach to the negotiations’, have since confirmed the EU in the view that the real negotiations over a new economic agreement would have to wait until after December.
E.  The European Union is a treaty-based organisation of 27 countries. As its website notes, it was ‘set up with the aim of ending the frequent and bloody wars between neighbours, which culminated in the Second World War.’ The UK joined the original six members (Belgium, France, Germany, Italy, Luxembourg and the Netherlands) in 1973, along with Ireland and Denmark. Further expansions took place, especially after the end of the Cold War between the West and Russia. At the suggestion of then UK Prime Minister Margaret Thatcher in 1986, it was agreed to establish a Single Market and Customs Union in 1993, based on four key freedoms – free movement of goods, services, people and money – and this transformed trading relationships across the continent.
F.  The Financial Settlement or ‘divorce bill’ is part of the Withdrawal Agreement and covers the costs of the programmes that the UK agreed to support during the period of its EU membership. Like most organisations, the EU operates on a pay-as-you-go basis and only charges member countries as and when bills actually come due. The UK calculated this to be between £36 billion-£39 billion (€40 billion-€44 billion), depending on the assumptions used.
G.  The UK held 2 General Elections whilst finalising the Withdrawal Agreement. The first, in 2017, forced premier Theresa May to rely on the Ulster Unionists in order to gain a working majority in Parliament.  The second, in 2019, gave Boris Johnson a comfortable 80 seat majority on the basis that he would “Get Brexit Done”.  In reality, however, the only bit of Brexit that has been “done” is the exit from the EU. The process of replacing all the arrangements built up over the past 47 years, since the UK joined the then European Economic Community, has really only just started.
H.  A Hostile No-Deal at the end of December would be the worst of all possible outcomes, as it would mean the UK had to trade on WTO terms with no goodwill on key issue such as security, air traffic rights etc.  Unfortunately, this is a significant risk, given the range of areas that could cause friction – fisheries policy, level playing field and state aid etc. The underlying issue is that the UK is now a “Third Country”, and has lost its veto rights in Brussels as well as the ability to help determine policy. Trade negotiations are always difficult in our experience as they inevitably create cause Winners and Losers across different industries – as they are based on the negotiators conceding something of value to the other side in one area, in order to get back something of value for themselves. And potential Losers generally complain very loudly. 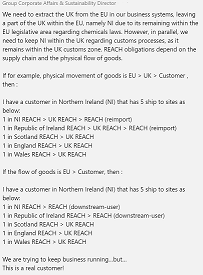 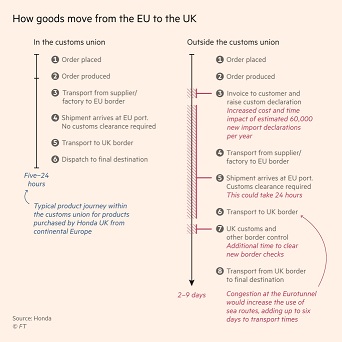 U.  Unblocked, or frictionless trade, was a key aim for business. They didn’t want to go back to the pre-1993 world, before the Single Market arrived, when vast numbers of forms had to be filled in and lorries/ships sometimes stopped for hours for border checks. As Honda explained in June 2018 (see chart) it could easily take between 2-9 days to move goods between the EU27 and UK without a Customs Union, compared to between 5-24 hours today. The cost in terms of time and money would be enormous given that, as Eurotunnel told the Commons Treasury Committee in 2018, ‘Over the past 20 years, warehouses have become trucks rolling on the road’.
V.  Ursula von der Leyen took over from Jean-Claude Juncker as EU Commission President in December 2019.  Her priorities are naturally different from his, with her key focus being to manage the Covid pandemic and deliver the EU Green Deal. On Brexit, she noted in January 2020 in London that “The truth is that our partnership cannot and will not be the same as before. And it cannot and will not be as close as before – because with every choice comes a consequence. With every decision comes a trade-off. Without the free movement of people, you cannot have the free movement of capital, goods and services. Without a level playing field on environment, labour, taxation and state aid, you cannot have the highest quality access to the world’s largest single market.  The more divergence there is, the more distant the partnership has to be.“
W.  WTO Terms are not actually “terms of trade” at all, but simply a reference to the basic rules set out by the World Trade Organisation. As our BrexPlainer video explains, they mean that a tax, called “Tariffs”, would be reintroduced for trade in goods between the UK and the EU27.  Services, including financial services, could also be impacted by restrictions on market access. Border controls and customs checks could add time to shipments and impact supply chains.  This could be particularly important for highly regulated sectors such as chemicals.  Documentation and paperwork will increase, as businesses will need to be able to prove the nature and origin of their goods, especially if they use parts or components from several different countries. Although the UK government prefers to refer to WTO terms as Australian terms, Australia does in fact have a series of major agreements with its neighbours.  In reality, no country currently trades on WTO terms, as this briefing from the independent academic group, The UK in a Changing Europe, explains.
Z.   Zig-zag perhaps best describes the process that has led us to this point. It began long ago when Margaret Thatcher resigned in 1990, as the catalyst was partly her hostility to European Monetary Union. Fast forward through many zigs and zags by both main political parties, and we finally reached June 2016 and the Brexit referendum – and then, in turn, tomorrow’s next month’s exit from the EU.

PREVIOUS POST Plastics producers face a 'wake-up call' from both ends of the value chain
NEXT POST OPEC set to lose out as Biden, EU and China focus on Climate Change opportunities