Home Blogs An Evergrande default could reset the Chinese, and global, economy 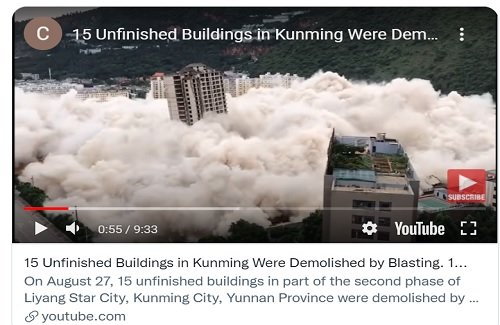 China’s economy has been ‘subprime on steroids’ since the financial crisis in 2008. And essentially, this has morphed into a giant Ponzi scheme, where some property developers used deposits paid by new buyers to finance the construction of apartments they’d already sold. Now the world’s most indebted property developer, Evergrande, has warned it may default with $305bn of debt. And the BBC reports it “owns 1300 projects across 280 cities” in China.

Ponzi schemes work for the people who join at the beginning. They get their promised return from the people who come in later. But one day, the flow of people dries up. And the ones at the back of the line then lose out. As the video shows, that seems to be the state of play in China today, with unfinished apartment blocks now being dynamited due to lack of demand.

The end-point has been a long-time coming, just as with the sub-prime disaster. I was warning of a US financial crash in 2005-8, here and in the Financial Times. And the catalyst for the crash duly came in September 2008 with the Lehman collapse. But until then, investors had preferred to listen to US Federal Reserve Chairman, Alan Greenspan, who said there could never be a “national housing crisis“.

It’s been exactly the same with China’s property speculation, which I’ve also been writing about here and in the pH Report and the Financial Times for a while. “Bigger” doesn’t mean “better”, but it does mean that the bubble can last longer – especially as real estate is 25% of China’s economy.

The psychology of the bubble was well described last week by Prof Michael Pettis of Peking University:

What happens next? The likely outcome has been described by Anne Stevenson-Yang of J Capital Research, a long-time expert adviser on China:

The slightly longer answer is that leverage makes an investor look like a genius on the way up, and bankrupts them when the bubble bursts. As Bloomberg reported last week, offshore dollar investors in Evergande could well lose 75% of their money.

As with Lehman in September 2008, there is a real risk that we are now heading for a Minsky Moment – when investors suddenly discover they have overpaid – and all rush for the exits together. China’s central bank governor warned of this risk back in 2017, as I noted at the time. So we can assume that, unlike the USA in 2008, the government is as well prepared as is possible.

The issue today is therefore that investors outside China have not taken this risk on board, just as they ignored the original US subprime risks from 2005 onwards. In this case, an Evergrande default could well cause a stampede for the exits around the world.