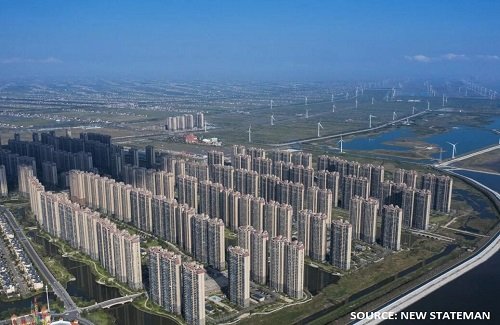 These lines from Ernest Hemingway’s classic novel “Fiesta” (USA title ‘The Sun also Rises’), summarise where we now are with Evergrande’s likely default in China.  It did indeed begin “gradually” at first – starting in February 2016. As I noted here and in the Financial Times, it was then clear that Chinese government policy was changing:

“The changes underway in China’s lending policies are far more significant than anything being planned by central banks in Tokyo, Frankfurt or Washington…. Anyone who lived through the Reagan/Thatcher period knows that restructuring an outdated economy is an extremely painful process, as over-capacity is reduced and inefficient industries downsized.”

Now, we are moving to the ‘suddenly’ part, when the wider problems with China’s real estate bubble impact the global economy. It was, after all, valued at $52tn by Goldman Sachs in 2019 – 4x China’s GDP and around 2/3rds of global GDP.

Many analysts are missing this key point. But as we noted in this month’s pH Report, President Xi was very clear back in January on the way forward, and the risks involved:

“The economy is in an uncertain state.

Our economy is now in a slowing growth phase, a painful structural adjustment phase, and a phase of absorbing the adverse effects of previous stimulus policies. The world economy is also in a period of profound adjustment, which makes for an extremely complex economic development environment.

“China has entered a New Normal.

Understanding the New Normal, adapting to it, and guiding its development constitute the major theme of China’s economic development.” There are 4 major dimensions to the coming crisis, as I will discuss in more detail next week. And contrary to current analyst opinion, these create major downside for the global economy, as well as China’s. The reason is that the real estate sector is key to China’s economy at 29% of GDP. And its growth has been key to the global economy’s growth over the past 10 years:

In turn, this will impact consumer spending around the world as economies turn down.  It will likely also provide a painful ‘wake-up call’ for global financial and housing markets, which are currently priced for perfection. As George Magnus warned last week:

“Much of the way the world currently works depends on uninterrupted and elevated Chinese growth. Think of global supply chains, exports and growth, as well as China’s own geopolitical leverage and narrative… All of this could be in jeopardy in coming years from the iceberg whose tip bears the name Evergrande.”

PREVIOUS POST An Evergrande default could reset the Chinese, and global, economy
NEXT POST Xi aims to "bring order out of chaos" by bursting China's property bubble