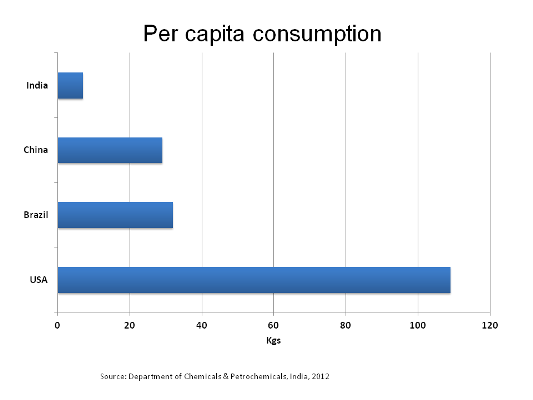 “I REALLY worry about the ability to export extra capacity from the US as I think global markets will become much more regional,” said a source with a poylolefins producer .

“The US is also pretty much a saturated market because of high existing levels of polymers consumption [see the above graph] and so I worry where the growth is going to come from to consume all the additional volumes – particularly if US economic growth hasn’t really recovered.

“There is another problem, which is down gauging. As polyolefins technology improves – and we communicate that technology in ever-more effective ways that enables more and more converters to down gauge – we are encouraging less consumption growth.

“The irony is that whilst this is enabling us to gain better prices per tonne for our polyolefins, it is making it harder for us to sell big additions to capacity – especially as what defines a world-scale plant continues to increase.”

But a greater sense of “community”, which we discussed last Friday, might lead to even greater down gauging. Environmental concerns could cause consumers to demand even less plastic packaging from retailers, with the pressure transferred up the manufacturing chain.

Western economies will also shrink as populations get older. This will, obviously, mean less rather than more demand.

And so what might be an alternative approach to nearly always building big plants whenever you get the opportunity?

It should be greater caution. Producers should instead go for debottleneckings and other incremental smaller-scale capacity increases.

New technologies should also be examined that enable smaller ethylene plants to be built.

And as more and more finished goods are built to last, R&D departments need to work on making on grades of polyolefins that have greater durability – i.e. a dashboard in an automobile that will last for 20 years.

The 3D printing revolution, as we again discussed last Friday, should also be embraced. To stick to the example of automobiles, people will be doing their level best not to have to buy a new car at all.  Thus, they will want grades of polymers that can easily be printed into cheap replacement spare- parts.

This all echoes, and adds to, the arguments we put forward in chapter 9 of our e-book, Boom, Gloom & The New Normal, which was published in February 2012.

Back then we thought that quality would increasingly matter more than quantity – and that manufacturers needed to focus on reducing waste. The details of the story will continue to evolve, but we think that the bare bones of the narrative will remain the same.