Big declines in Chinese polyethylene imports, a global recession and a financial crisis 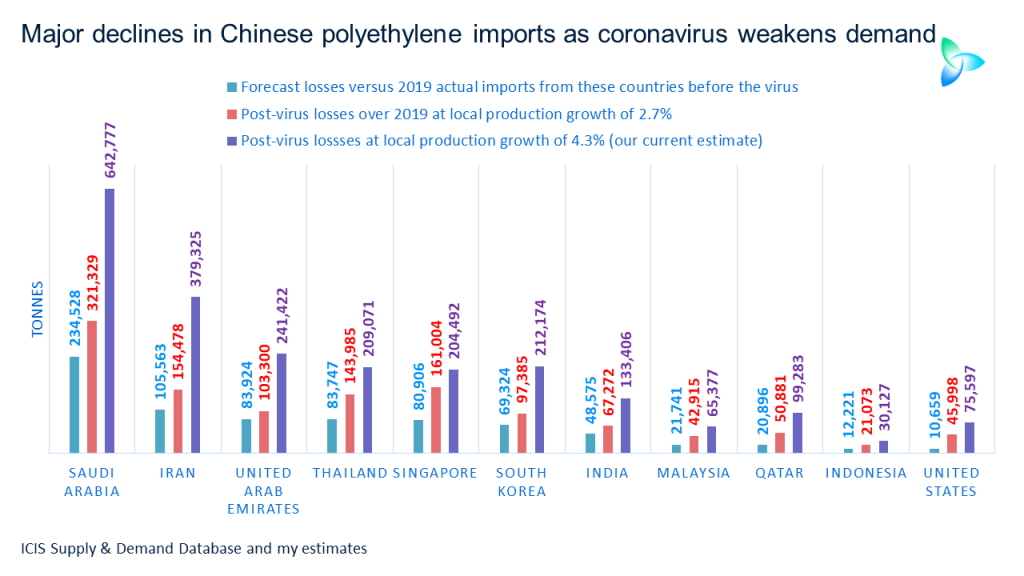 YOU MIGHT be hoping that sanity will be restored after the “most expensive speech history” – Donald Trump’s comments that have been unfairly or otherwise blamed for yesterday’s rout in global stock markets.

But has the market really been oversold, mainly or entirely in response to a few ill-judged words from the president on banning on travel to the US from EU countries? Or are we instead seeing a return to the fundamentals of supply and demand in the real economy – the economy of real things rather than equities? I strongly believe that the latter is the explanation for what happened yesterday.

Let’s briefly recap history. After the Global Financial Crisis, rather than allowing the banks to take a hit, the bigger the exposure of a bank the greater the scale of the government bailout. The result was that being “too big to fail” remained the right approach for banks and other financial institutions. Even worse was that the appetite for risk after 2008 was increased by all the quantitative easing programmes and record-low interest rates.

The nature of risk morphed away from real estate and into corporate debt. But debt is debt, no matter what the colour of the horse you are gambling on. As the FT reports, the global outstanding stock of non-financial corporate bonds reached an all-time high of $13.5 trillion by the end of last year, according to the OECD – double where it stood in December 2008 in real terms.

Because central banks were constantly able to re-juice financial and debt markets when they took a minor tumble, serious supply and demand analysis across many manufacturing industries, including petrochemicals, was replaced by intellectually careless headline slogans such as “the rise of the Chinese middle class.”

Too few people looked behind this slogan in order to work out a.) What being middle class meant in the context of a country with much lower per capita incomes than the West, and b.) The extent to which Chinese demand might moderate when it had to come to terms with its debt and demographic problems.

But why bother with in-depth analysis when the central banks were all powerful and could seemingly fix any hiccup in the availability of cheap debt and in the rise of share prices?

At some point we were always going to have deal with excessive debt and overinvestment in manufacturing relative to underlying weaker fundamentals of demand. These weaker fundamentals are the result of a structural slowdown in China, the retirement of the Babyboomers in the West – and, in the case of polymers such as polyethylene (PE), growing sustainability pressures.

All that was needed was a catalyst. Nobody could have predicted what the catalyst would be and its timing, but I believe it has now arrived. As I wrote last month:

It is horrible, it is awful, that the catalyst [coronavirus] is inflicting a loss of life. But it is what it is. We need to get on with planning and mitigation. This will require some hard-headed realism – for instance, deep cutbacks in operating rates and the postponement, or even cancellation, of new investments.

Since then we have seen another catalyst emerge – the collapse in oil prices as Saudi Arabia and Russia battle for market share.

I spent most of yesterday on the phone or on WhatsApp to my contacts, some of whom I’ve known for more than 20 years, as we all tried to work out what would happen next. My message to them was this and it’s my message here: Prepare for a major financial crisis along with what is now an inevitable global recession.

As always, I very much hope I am wrong, that the markets have been oversold over the long term (a short-term bounce back seems quite probable) and we will get away with just a global recession.

But being forewarned is forearmed. So, watch you credit risks up and down your supply chains. Make sure your lenders will maintain their support. And constantly crunch and re-crunch your supply and demand data in order to calculate realistic operating rates and sales targets.

Equally important, in the context of highly volatile but generally bearish demand, will be constant changes in export and import flows. I hope what follows helps you kick- off the process of assessing exports and imports.

Impact of the virus on Chinese PE imports

On Wednesday, I provided you with my latest forecast for Chinese PE demand in 2020. I now see consumption falling by 11% versus my pre-virus estimate. This would mean 2020 demand at just 32m tonnes, 4m tonnes smaller than my original expectation of 36m tonnes. 32m tonnes would represent a 5.6% decline over last year’s actual demand level of 34m tonnes, when you analyse the exact numbers.

Let’s consider what this lower demand outlook could mean for Chinese imports from some of its major trading partners. The above chart first shows the declines in imports I had expected in 2020 before the virus occurred versus actual 2019 imports. I then present two alternative outcomes – one showing local production growth at 2.7% in 2020 and the other at 4.3%.

The 4.3% average of production growth across all three grades was our estimate a few weeks ago before the virus became a global problem, which has added to the damage to Chinese PE demand growth. It thus seems possible that start-up of new capacity will be delayed because of weaker consumption. Refinery operating rates will also remain depressed for a good while longer because of a fall in local fuels demand due to quarantine restrictions. This will continue to reduce the availability of naphtha, liquefied petroleum gas and other feedstocks for steam crackers.

Note that I calculated the three outcomes for 2020 imports based on the percentage market shares of total imports form these countries remaining unchanged from 2019. This was based on the premise that the US will not see any market share gain from the Chinese government’s decision to allow importers to apply for exemptions from the 25% additional import duties that have been imposed on US high-density PE and linear-low density PE cargoes.

The extra tariffs were imposed from August 2018. This led to the US seeing its percentage share of the Chinese market shrink in 2019 versus 2018, just as it underwent a major increase in production.

There are two reasons why I think the US might not gain much if in any market share in China in 2020. Firstly, the collapse of oil prices has eroded the advantage of US ethane-based PE producers over their naphtha-based competitors. This will enable Asian naphtha-based PE producers to better protect their positions in China. Secondly, extreme price volatility may deter long distance imports in general, on the basis that buyers will not want to take the risk of prices changing several times before arrival.

My assumptions on the US could of course be wrong, resulting in the US gaining more market share in China. This would make the outcome for other exporters to China even worse than under the scenarios presented above.

Even assuming the US doesn’t win any new ground, the above numbers are bad enough as they show that:

Please don’t get so wrapped up in arguing my numbers are wrong that you miss the overall essential message. The message is that you must plan and re-plan for changes in export and import flows across all the petrochemicals and polymers your produce and across all the countries and region with which you do business.

Only by doing so can you minimise losses from running plants too hard and being left with inventory you cannot sell. This kind of constant analysis will also enable you to identify opportunities to raise sales to countries and regions which may not be as badly affected by the virus.

This is the help that ICIS can provide you with, utilising our Supply & Demand Database, our new and improved tracking of outages, turnarounds and market-related production cutbacks and our excellent on-the-ground knowledge of changes in demand. Contact me at john.richardson@icis.co for help.