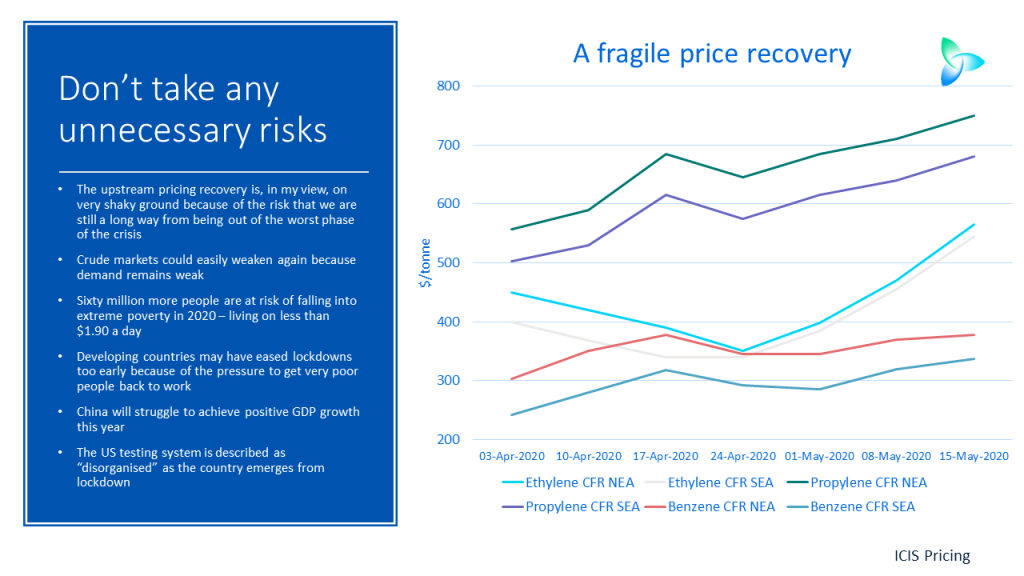 RECENT rises in oil and petrochemicals prices should not in my view be taken as a signal that the worst phase of the coronavirus crisis is over. Please, please be careful out there.

The extent of the rebound in crude should be a cause for concern given the state of supply and demand. As of yesterday, WTI was up by 70% versus in May with Brent 39% higher even though Bloomberg data show 50m/bbl of Saudi crude is heading to the US. Tom Tom real-time traffic data for the US show traffic volumes in major US cities are nowhere near returning to normal.

Next Monday, 25 May, is also the Memorial Day national holiday in the US which traditionally marks the start of the country’s driving season when millions of Americans get into their cars and mobile homes and head for the national parks and the beaches. This is not going to happen this year, of course. When reality dawns there is obviously a risk of a downward correction in crude and petrochemicals markets.

Markets may also weaken on the evaporation of optimism surrounding the pace of China’s economic recovery.

A major cause of optimism is the 4.4% year-on-year increase in auto sales in April, the first year-on-year monthly increase in 21 months. Some people argue that this is because of a new social trend resulting from the coronavirus pandemic: People in China buying more cars because of fears of catching the disease on public transport.

But China’s auto sales were down no less than 45% in Q1 2020 versus the same quarter of last year, according to the latest issue of the PH Report. The April rise in sales was the result of purchases delayed by the coronavirus pandemic, says the Wall Street Journal. The PH report adds that in response to a 38% Q1 fall in used car sales, the government has reduced restrictions on inter-province sales and has cut VAT for used car dealerships to 0.5% from 2%.

This tells me that the government’s focus is on boosting affordable consumption of autos, and affordable consumption in general, because of excessive debt built up during the peak 2009-2017 period of economic stimulus. China’s debt to GDP ratio is 310%, almost double 2008’s level of 160%. A People’s Bank of China survey of 30,000 shows how middle-class employees, young people with mortgages and small business owners were struggling with debt before the crisis hit.

The focus on affordable consumption and alarming levels of existing debt, in my view, point to no “big bazooka” of economic stimulus during the rest of 2020. Stimulus will be relatively modest during the rest of this year compared with 2009-2017. This will lead to a growing consensus as this year progresses of the very real danger of China registering negative GDP growth.

Be aware though that today marks the start of this year’s delayed National People’s Congress during which there is likely to be an announcement of a big new infrastructure spending programme. This seems politically essential as 2020 is the target year for China becoming a “moderately prosperous” (xiaokang) country, which would involve doubling per capita GDP compared with 2010.

Despite this stimulus, achieving positive GDP growth in 2020 is going to be difficult because of the depth of negative growth in Q1, the complete collapse of China’s export trade resulting from the pandemic and the inability to launch stimulus on the scale of 2009-2017.

The World Health Organization (WHO) has given a very stark warning that the pandemic is far from over after the biggest daily global rise in new cases since the crisis began.

“We still have a long way to go in this pandemic. We are very concerned about rising cases in low- and middle-income countries,” said Tedros Adhanom, the WHO’s director general.

Sixty million people could be pushed into extreme poverty by the virus, which is defined at living on less than $1.90 a day, said David Malpass, president of the World Bank. The World Bank expects world economic output to contract by as much as 5% in 2020, erasing efforts over the past three years to alleviate poverty in the world’s poorest countries, writes the Financial Times.

While the number of new cases in parts of Europe appears to have peaked, there has been a rapid increase in Latin America. Brazil now has the third highest number of confirmed new cases, surpassing the UK.

“In south and southeast Asia, governments are reopening their economies because they have no choice as the really poor people haven’t been able to put food on the table. They haven’t been able to do the kind of very low-paid work which allows them to survive, such as collection and sorting plastic rubbish,” said one of my contacts with a major global polyolefins producer.

“The risk is lockdowns are eased too soon, resulting in a major and much bigger second wave of the virus,” he added.

Here is some good news, though: The WHO has reported only 90,000 confirmed cases in Africa – with more than 35,000 recoveries and 2,885 deaths. The widespread outbreak forecast for the continent has so far not materialised.

Back to the US where the University of Minnesota report said that coronavirus testing in the States was disorganised and needed coordination at the national level. “Testing is very, very important, but we’re not doing the right testing,” said Mike Osterholm, head of the university’s Center for Infectious Disease Research and Policy, which issued the report. The rapid spread of the disease in the southern hemisphere suggested it was likely to flare up again in the US in the autumn and winter, said Robert Redfield, director of the US Centers for Disease Control and Prevention.

The above chart shows the modest pricing rebound in three of the six big building blocks for petrochemicals – ethylene, propylene and benzene. As you can see, ethylene and propylene have registered the biggest increase since their lowest point in 2020 on 3 April. Benzene has barely crept up.

What is important to note is downstream derivatives prices have moved up either more modestly over the last few weeks or, in the case of polyethylene and polypropylene, have remained flat. If final end-use demand in consumer goods markets had been better, then the price transfer upstream to downstream would have been stronger.

I could of course be wrong and the rally in prices might continue for a while longer. But the risks of an eventual retrenchment are big for all the reasons outlined above. So, as I said, please, please be careful out there if you are either a producer or buyer of petrochemicals. Don’t take any unnecessary risks through building up raw materials and finished-product inventories.

PREVIOUS POST China petrochemical inventories build on what could be false hopes of a V-shaped rebound
NEXT POST Coronavirus, reshoring and the polyester industry: Good luck with that