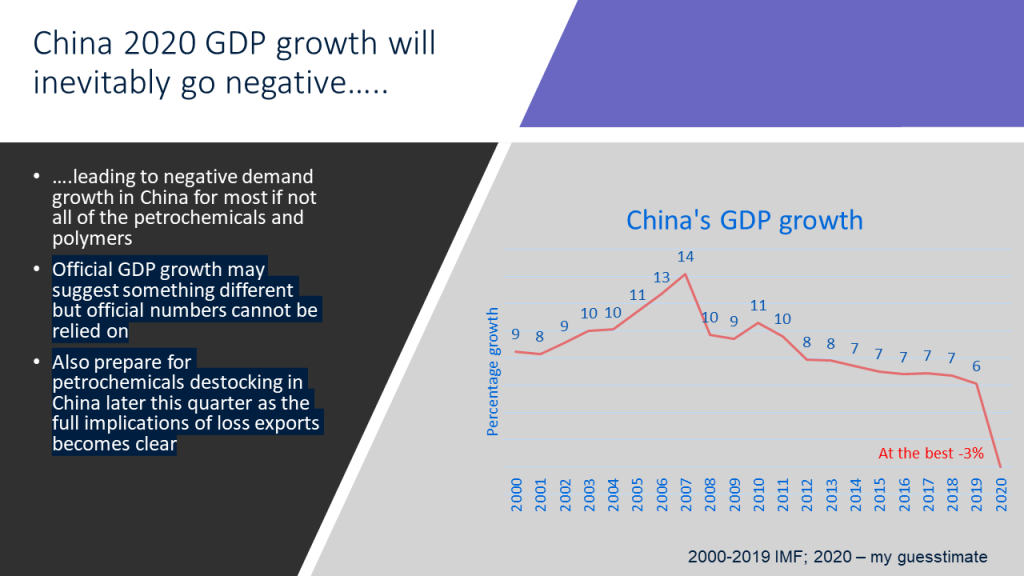 FRIDAY 17 April is the day when we will get the official Chinese GDP figure for Q1. If it is better than had been anticipated by analysts, the number will have a positive effect on financial markets. But be warned that this doesn’t necessarily mean that in the real, physical world of petrochemicals or any other manufacturing sector, the number will represent good news:

Perhaps in such a vast and complex an economy the rebound from the COVID-19 crisis in March as the disease was brought under control will be stronger than the quickly gathered government reflects.

But remember this key statistic and use this to shape your analysis as the year goes forward: Independent economic estimates suggest that GD contracted by between 10% and 20% in January and February. Staggering. Climbing out of this economic hole during the rest of this year will be incredibly difficult.

It is also important to remember why being realistic about China is so essential. No other petrochemicals market is as important to the total global demand picture. Here are some startling examples of why this is the case, from the ICIS Supply & Demand Database: In 2000, China accounted for 12% of total global PP demand but this year we expect this to have risen to 38%; China’s share of ethylene glycols demand will have risen from 15% in 2000 to 57% this year; the corresponding numbers for PE are from 12% to 32%.

This crisis to “dwarf the Global Financial Crisis”

The words in quotes are from the IMF in its shocking new report on the global economy. Please let me stress that I take no pleasure in again saying that I’ve been warning about damage on this scale for weeks now. I instead feel saddened that even now some people are still talking about economic stimulus as a quick cure.  Remember: You cannot stimulate economic activity that’s not taking place. The recovery – and the world is going to look very different when we have recovered – is going to take many, many years.

Back to the subject of China. Its export economy is basically gone. Over the rest of this year, other than serving medical and food packaging needs, its exports to the West will be vastly lower than in 2019. This isn’t a subject for debate, I am afraid. There is no scenario under which its exports of durable non-essential goods can be anything but much, much lower than last year.

This of course feeds into a negative effect on many of the petrochemicals value chains. Think of styrene and the styrene polymers such as HIPS and ABS that go into autos, electronics and white goods. Perhaps the worst of all the value chains – and I shall explore this in a later post – will be the polyester fibres value chains. Clothing sales in the West have been quite literally decimated. Unsold Spring and Summer clothing stock is set to be liquidated on a scale never seen before.

What concerns me is that we’ve seen a big pick-up in petrochemical operating rates in China since the virus was brought under control. We’ve also seen a big pick-up in downstream production amongst the SMEs. But how much of this improved activity involves post-crisis restocking that will then require destocking when the full extent of lost export orders becomes apparent? I believe there will be a substantial destocking process towards the end of Q2.

Here is something else critically important for you to remember as you build realistic China forecasts or the rest of 2020: It is simply impossible for China to repeat the scale of its post-Global Financial Crisis economic stimulus because of the legacy of bad debts.

The good news here is that this has been consensus thinking for months now. Nobody is suggesting that the ‘great bazooka” of economic stimulus, as it is being called, can be fired again. And what a bazooka it was: China’s PE demand growth went from minus 1% in 2008 to plus 31% in 2009. Yes, plus 31%. This spectacular recovery, which was repeated up and down all the other petrochemicals value chains, had a tremendously positive global effect on the rest of the world. China rescued the global economy.

The legacy of bad debts will not only limit China’s ability to stimulate domestic demand during the rest of this year; it also threatens to create a debt crisis because of the impact of COVID-19. As the South China Morning Post reports:

The nation’s much-vaunted army of consumers are flinching as the coronavirus outbreak closes shops and causes job losses, hurting demand for new credit and ability to service older ones. A wave of delinquencies will test the resilience of Chinese lenders this year, with the economy expected to be at its weakest since the 1976 Cultural Revolution.

It is a vicious circle that could carry on throughout this year. As people spend less and jobs are lost this will depress growth and put more and more pressure on the consumer credit companies, leading to a further increase in their non-performing loans. This will make it ever harder for the consumer loan companies to issue new credit to get the economy going again. In a sign of what could lie ahead, the net balance of consumer loans – made up of short-term and credit card loans from banks and online lenders – plunged by a quarter in the first two months of this year to 7.4 trillion yuan (US$1 trillion), according to the SCMP.

And might the hugely overinflated Chinese real estate sector finally suffer a collapse in pricing that China sceptics have been warning about for years? As fellow ICIS blogger Paul Hodges wrote last August: China’s tier 1 cities boast some of the highest house-price-to-earnings ratios in the world, while profits from property speculation allowed car sales to rise fourfold from 500,000 a month in 2008 to 2m a month in 2017.

Bur after a 40% decline in housing sales in February, the SCMP again reports that sales in 30 major cities tripled in March. Still, though, overall housing sales are expected to be down in 2020 versus last year. Even if we don’t see a housing sector crisis, a fall in sales points to a slowdown in price rises. This could lead to reduced demand for autos etc. as fewer people are able to realise profits from rising real-estate values.

Some economists are still, though, forecasting Chinese GDP growth for the full-year 2020 at around 3%. Although this would be around half the official target of 6%, this would still represent quite an achievement given the size of the economic hole in January-February. Other economists are however forecasting negative full-year growth for China of as high as 3%. The only correct answer is that of course none of us know what the exact numbers will be.

But because of all the above, my personal view is that China will end up with negative real GDP growth in 2020, as opposed to the official number. This will mean negative growth in China for just about all the petrochemicals and polymers for the full-year 2020 versus last year.

There is no point in sugaring the pill. This is just of the many very painful and difficult realities that we all face.