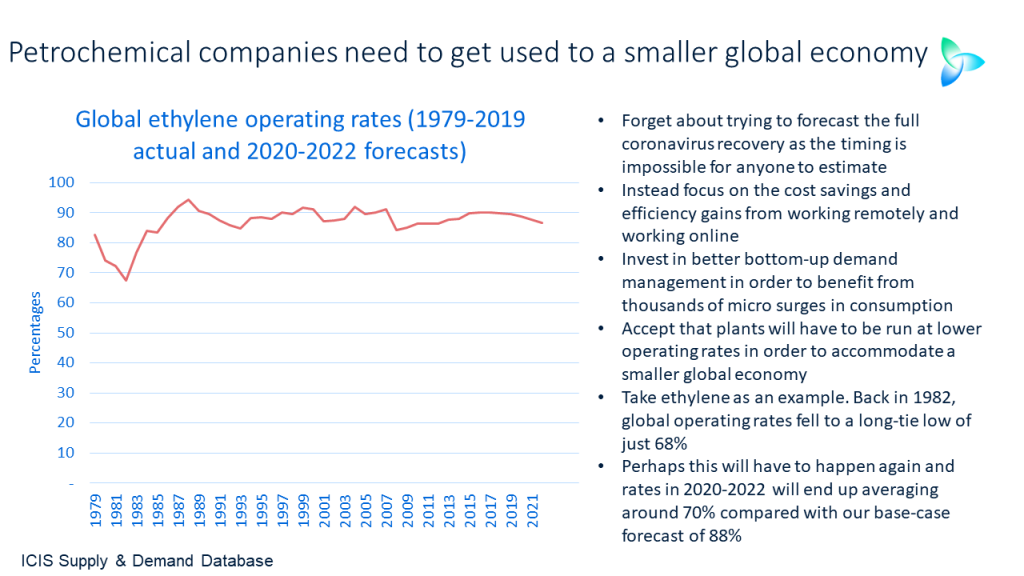 PETROCHEMICAL companies can adapt to the coronavirus New Normal by running their businesses to suit what The Economist describes as the 90% global economy. The lost 10% of economic activity will be the result of social distancing, lost incomes, lost wealth and changes in consumer behaviour, says the magazine.

Maybe it will be the 70% economy as there are too many variables to be exact about the scale of the losses. All we can be certain of is the impact will be at least as bad as the Great Depression and very probably even worse.

“What happens after the disease is brought under control, though?” you might ask. As this is impossible to assess right now, this will not be the subject of this post.

Companies are better off not even contemplating the unknowable point in the future when coronavirus is just another disease that we have learnt to manage, as this will distract them from managing the here and now. The here and now could very easily be with us for several more years.

Before I consider what companies need to do to survive and even prosper relative to their peers in the 70-90% economy, I firstly need to deal with what I see as some harmful untruths. You need to get past the untruths in order fully focus on mitigating the crisis.

Valuable time has been lost, in my opinion, on the notion that polyethylene (PE), polypropylene (PP), polyethylene terephthalate (PET) and general-purpose polystyrene (GPPS) demand growth would not be negative.  This was based on the notion that panic buying in supermarkets would provide lasting compensation for the loss of 10-30% of the global economy.

The good news, if you can call it that, is everyone should be fully past the distraction following Dow Chemical’s announcement last week that it would temporarily idle 10% of its global PE and elastomers capacity.

Equally important is ignoring the idea of a V-shaped recovery. Stock markets will occasionally suggest the opposite over the coming months and even years. But stock markets are not the real economy.

No matter how much equities are juiced by monetary stimulus, what really counts is the decimation, and this no exaggeration, of the livelihoods of hundreds of millions of low-paid workers who quite often do not even own equities. A bartender in Bali or in Sheffield in the UK will not see any benefit from a rally in the S&P 500.

Many of the rallies in equities over the coming months and years may well be accompanied by a rally in oil prices that will foster the idea the petrochemicals business is through the worst of the crisis.

This in my view cannot happen until the real, physical demand for the sticky black stuff – and all the petrochemicals made from oil – returns to something like pre-crisis levels. The return can only happen when social distancing is a thing of the past and when we have replaced all the lost incomes and wealth of the bartenders, the waiters and the small businesses.

Our willingness to spend will also need to recover to something approximating the Old Normal. How long will it be before even those with the money and the jobs will feel confident enough to visit a bar or a restaurant or to fly overseas for a holiday?

More than a third of Americans think it will be “several months” before it will be safe to re-open businesses as normal. This suggests that when US businesses open, shoppers may stay away. If the US sees a constant ebb and flow of the number of infections, as the country re-opens and shuts down again, these attitudes could persist.

“Watching a performance of Beethoven on a computer or eating a meal from a favourite restaurant at home, is not the same as the real thing – but it is not bad,” writes The Economist.

The magazine makes the point that if the pandemic had struck two decades ago, only a small number of people would have been able to work and satisfy their needs. Just imagine if the 2003 SARS epidemic had become a pandemic on the scale of coronavirus, when the smartphone was in its early days and there was no Zoom or Microsoft Teams. The economic damage would have been far greater.

Petrochemicals companies have got used to selling online, which has substantially cut travel costs. Necessity breeds innovation, even in Asia where for many years there has been a great reluctance to replace face-to-face meetings, long evening meals and Karaoke sessions with anything more than WhatsApp.

“We’ve found a way of saving so much money by selling and marketing online I cannot see the old ways of travel coming back at all,” said one of my Singapore-based contacts with a global polyolefins producer.

“Corporate offices will also be downsized as we have discovered that working remotely really works. We save on office rental costs. The first month was difficult but now the efficiencies are so obvious – for instance, the time we are saving on commuting to and from work.”

Demand management will be an extra cost, though. This is a cost that must be borne if companies are going to take advantage of the many thousands of micro surges and dips in demand as we head towards recovery at some unknowable point in the future. This was the subject I discussed on Monday but needs to be stressed again as it is so critical

Gone should be the era of top-down demand management when consumption was sometimes measured as a multiple over GDP. This is far too crude a measure in the new highly complex demand environment. In PE alone, for example, I have been told of no less than a 100 micro surges and dips in demand for different end-use applications since the crisis began.

Companies will need to invest in more people on the ground who are close to the customers and the customers of the costumers, all the way down the petrochemicals value chain to the retail levels. In one respect this will be a return to the 1980s when production levels were set by order books, meaning an extra ten tonnes of output was only sanctioned if an order had been confirmed.

But the big difference will be today’s highly sophisticated data gathering and data crunching techniques. Big Data can play a major role in micro demand management. So must also good old common sense, experience and strong relationships from say a marketing executive who really knows the food packaging sector, even if these days she or he will need to maintain their knowledge largely via through the online world.

We need to also accept that some petrochemicals end-use sectors will struggle much more than others.

I cannot see a way back to anything like the old levels of automobiles demand because of loss of incomes and because of the reluctance to travel resulting from concerns over the virus. Petrochemical companies heavily dependent on autos will have to make some very difficult decisions on rationalising operations.

Petrochemicals companies will also have to get used to running their plants at operating rates much lower than they have been accustomed to in order to accommodate the 70-90% economy. Plants will need to have the technical flexibility for rates to be quickly increased to take advantage of micro surges in demand.

What might this mean for the steam cracker, which of course is at the very heart of the global petrochemicals business? As you can see from the above chart, detailing global ethylene operating rates all the way back to 1979, the lowest operating rate in the 1979-2019 period was in 1982 at just 68%.

Our forecast averaging operating rate for 2020-2025 is a pretty healthy 87%. But perhaps we will see a return to the low rates of the 1980s in general. Is this technically possible for today’s cracker technologies? It might simply have to become technically possible.

This is the way forward. It will not be easy, but it can be done. All of us can get used to just about anything and the petrochemicals business, which is packed with many brilliant minds and many great innovators, can and I believe will adapt to these new realities.

PREVIOUS POST Coronavirus and the way forward: Forecasting micro surges in petrochemicals demand
NEXT POST Further polyethylene rate cuts seem inevitable with no certainty on who will blink first