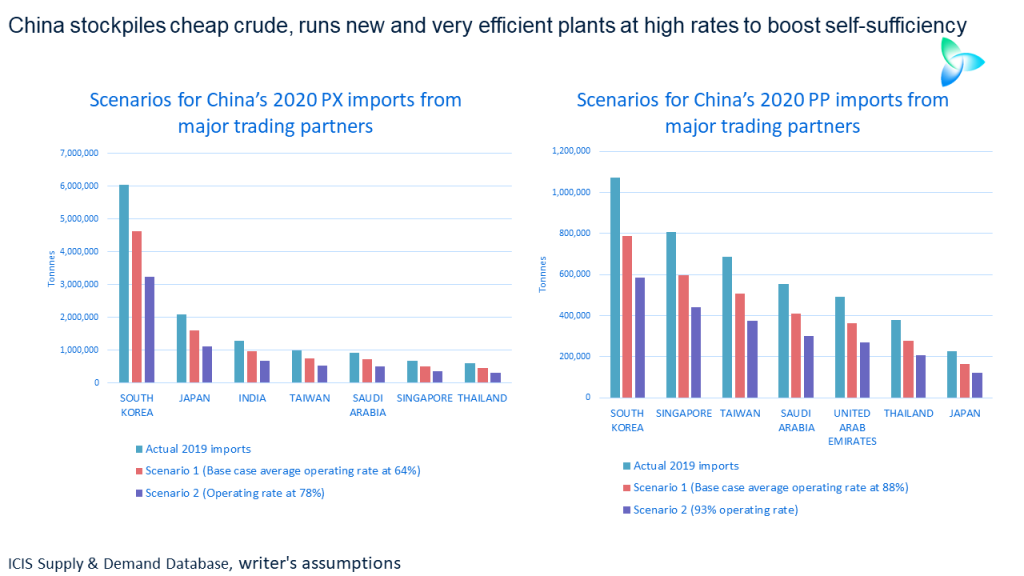 CHINA’S refineries and petrochemicals plants came roaring back to almost full production in April as the country’s coronavirus lockdown came to an end, even though downstream manufacturing was a long way from full recovery.

As of last week, I was told by my contacts in China that petrochemicals and polymers buyers were still only running at 70-80% of pre-virus production rates.

The persistent weakness in consumer demand was confirmed by the 2.8% year-on-year fall in retail prices in May. Meanwhile, China’s producer prices in May fell at their fastest rate in four years.

Now, however, we have seen renewed China lockdowns centred on Beijing because of a secondary outbreak of the virus. This threatens to further dampen consumer demand and add to oversupply in manufacturing.

I do not expect cutbacks in manufacturing output that reflect even weaker local demand. China may instead seize the opportunity to gain bigger shares in export markets as the rest of the world falteringly and slowly emerges from lockdowns.

Support for the export drive will be provided by cheap raw materials that were stockpiled earlier this year when prices were very low.

During the first five months of 2020, China’s iron ore imports rose by 5.1% on a year-on-year basis. The country’s steel production in April was at 62% of the global total compared with 54% before the pandemic began. Oil inventories in January-April rose by 670,000 bbl/day, easily exceeding the previous record increase, which was set by the US in 2014 at around 100,000 bbl/day.

China has lots of new refinery capacity. I believe the capacity will be run hard to take advantage of the cheap crude and to increase export revenues in compensation for weak domestic demand. Expect a big surge in Chinese gasoline and diesel exports  nobody wants much jet fuel) over the next few months.

As reformers at new refineries run at high rates to make mixed xylenes (MX) and toluene blend stock for gasoline, a lot of the MX will be channelled into paraxylene (PX) production. Some of the toluene will be converted to more PX to make further tonnes of PX as China runs its new PX capacity very hard.

The new PX plants will be run hard to again take advantage of cheap oil as well as excellent economies of scale. As with its new refineries, China’s new PX plants are very far to the left of the global cost curve. This explains why I think China’s PX imports in 2020 will be much lower than in 2019, as I discussed on Monday.

A further factor behind high local PX and other petrochemicals and polymers production will be the need to protect local downstream jobs at a time of high unemployment, in my opinion.

China will further raise its effective PX self-sufficiency through the Brunei Hengyi Petrochemical 1.5m tonnes/year PX plant, located in Brunei, which is 70% owned by Hengyi – a Chinese purified terephthalic acid (PTA) producer. I am assuming that most of the PX from the Brunei facility will be exported to China – for argument’s sake, 80% of its production in 2020.

The end result is the above chart on the left. It shows two scenarios for 2020 PX imports versus actual imports in 2019 from China’s biggest trading partners. I am assuming they will gain the same percentage shares of the total China market in 2020 and they did last year.

Both scenarios keep to our base case for 2020 demand growth at minus 1% over last year.

Scenario 1 assumes our base case average local PX operating rate of 64% and excludes the addition to Chinese self-sufficiency from Brunei. Scenario 2 adds in Brunei and assumes capacity utilisation of 78%, in line with the production growth we saw in January-April this year.

As you can see, the drop in imports from China’s main PX trading partners would be huge under either outcome:

As I shall discuss next Monday, when I look at scenarios for China’s PX imports in 2020-2030, I expect this trend will continue.

How will  less efficient overseas refinery-to-PX complexes respond to this trend? Consolidation seems possible, especially in markets where demand for transportation fuels will fall because of the rise of electric vehicles.

Polypropylene (PP) serves as another good example of rising self-sufficiency. 2020 net imports, even under our base for an average operating rate of 88%, would fall to 3.8m tonnes in 2020 from last year’s 5.4m tonnes.

The worst-case outcome would see this year’s net imports fall to just 2.8m tonnes. This again assumes that January-April production continues at the same level for the rest of 2020, leading to an operating rate of 93%.

And was with PX, both PP import scenarios stick to our base case of 3% demand growth in 2020 over last year.

Break this down to China’s imports from its top PP trading partners and we see that:

China looks set to push towards  to much greater self-sufficiency in PP for the same reasons driving high rates of PX production, including cheap oil. Cheap oil could translate into very competitive naphtha for steam cracker-based propylene feedstock.

If fluid catalytic crackers run hard in order to produce gasoline for export, this could mean plentiful supplies of propylene to make more PP. There are also reports of China stockpiling propane for start-ups of PDH-based PP plants in H2.

A theme of later posts will be on the challenges facing the Middle East as China moves to greater petrochemicals self-sufficiency, and as the EU increases its independence from imports through a big government-funded increase in polymers recycling. The region needs a new business model.

So does the rest of the global petrochemicals industry as China continues to push hard towards self-sufficiency (in later posts I shall also provide long-term scenarios for Chinese PP, polyethylene (PE) and styrene self-sufficiency).

Other challenges include what I believe will be a permanent loss of demand caused by the pandemic and environmental pressures that will make it much harder to produce virgin polymers and transport them around the world.

The new business model, which I shall again look in later posts, needs to centre on the societal value of petrochemicals.