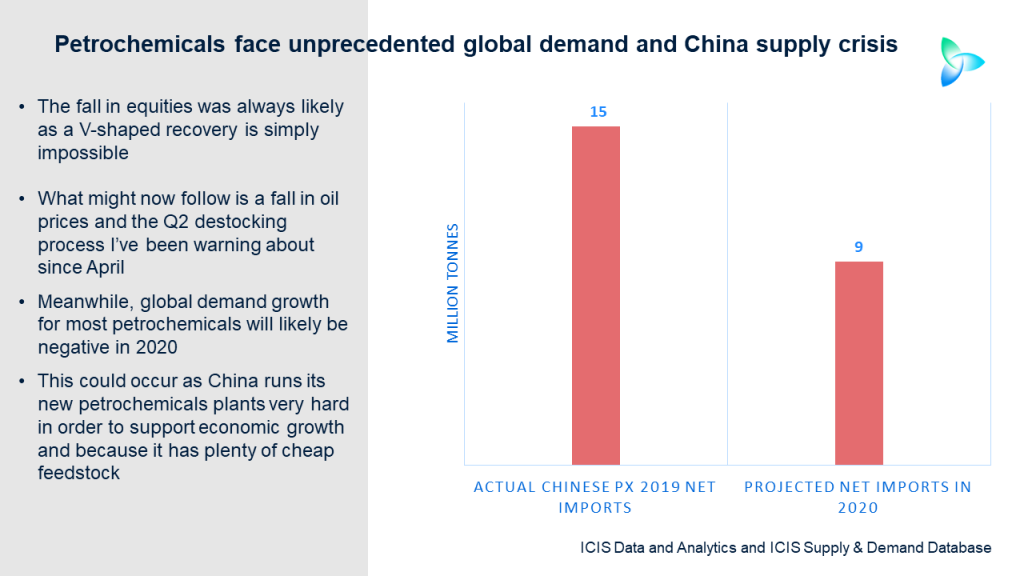 DON’T SAY I didn’t tell you that a decline in stock markets would happen. The post-March rally in equities was never going to be sustainable because of the enormous size of the damage to the real economy. We may see rebounds, of course, as we did on Friday as extreme volatility is here to say. But longer term, last week’s corrections are in my view a sign of worse to come.

Reports released last week by the World Bank and the OECD further highlighted the scale of the damage.

The World Bank forecasts that the recession will be almost three times as steep as that in 2009, and the deepest since the Second World War.

“With advanced economies contracting, China experiencing record-low growth and EMDE [emerging market and developing economies] growth savaged by external and domestic headwinds, the global economy is expected to shrink by 5.2% this year in a baseline forecast,” the World Bank said.

A return to lockdowns might mean that global economic output plunges by 7.6% this year before climbing back 2.8% in 2021, said the OECD. In its more optimistic scenario – in which a second wave of infections is avoided – global GDP is forecast to fall by 6% in 2020. But the organisation warns that whatever the outcome, the crisis will leave long-lasting scars because of a fall in living standards, high unemployment and weak investment.

Another reason why share markets have slipped is anxiety over the possibility of a second wave. There are also signs that the first wave may not have peaked. Economic imperatives have forced the easing of lockdowns even though in some countries the number of cases continues to rise.

Now that equities are on the slide, oil prices have begun to head in the same direction. Crude could decline towards its levels in April as the scale of demand destruction becomes more apparent.

On the supply side, the increase in prices to around $40/bbl has returned US shale oil to profitability, thereby potentially resulting in a market-capping rise in US output. Refiners have high stocks of petroleum products, so need less crude. US oil stockpiles hit a record high last week as the a rise in US coronavirus cases in some states threatened demand. Saudi Arabia may supply an additional 1m bbl/day from July

I hope that petrochemicals producers haven’t made the same mistake as in Q1 when they built raw-material inventories on the assumptions that oil could not go below $50/bbl and petrochemicals demand would be fine.

Mistakes made in the first quarter will no doubt have already been forgiven by investors as nobody saw the global pandemic coming. I was, though, amongst several people who warned in March that oil prices might go negative. Petrochemical producers could have seen this event coming.

Investors might be less forgiving if the same errors have been repeated during the second quarter, resulting in more write-downs on inventory losses.

Facing up to the demand realities

I have long been arguing that demand simply must be weaker than in 2019 across most of the petrochemicals and polymers. Let’s look in detail at just two products – polypropylene (PP) and paraxylene (PX) – to explain why.

These products are of course from very different value chains. But what they have in common is they mainly go into durable end-use application, and it is durable goods that have seen the biggest declines in consumption.

What has clouded the picture in PP is all the talk about booming demand for PP non-woven grades used to manufacture face masks.

Context is important here, though. I’ve been told that before the pandemic, non-woven grade PP accounted for some 3% of global demand.

Non-wovens will of course represent much more than 3% this year. Let us for argument’s sake assume the market share of non-wovens increases from 3% to 20% – a jump in demand that doesn’t seem unreasonable given the huge surge in demand.

This still leaves 43% of PP end-use demand – construction, automobiles, household appliances, electrical manufacturing and equipment manufacturing – that has been badly affected by the crisis with no clarity on how quickly demand in these sectors will come back.

This is reflected in our latest forecast for global PP demand in 2020 which sees just 1% growth over last year to around 77m tonnes. As recently as March we had expected 4% growth.

The right context is also important in PX. Downstream, in polyethylene terephthalate (PET) resins (bottle grade and film grades), there is a lot of distracting talk about how booming demand for PET bottle and film grades is helping to offset the loss of demand in polyester fibres.

This is about the split between non-durable and durable end-use applications. Demand for single-use PET bottles and films has been boosted by panic buying of drinks, food and other daily essentials during the lockdowns.

But because so many people have been stranded at home unable to shop, and because of the huge wealth and income losses, demand for polyester fibres that are used to make clothing and non-apparel products such as pillowcases and bedsheets has completely collapsed.

We expect global PX demand to fall by 3% in 2020 over last year to 46.1m tonnes. And in the critical China market, which will this year account for no less than 61% of global demand, we expect a 1% fall in consumption to 28m tonnes.

China will always do what suits China and right now its top priority is shoring up economic growth through supply-led measures.

When crude oil was very cheap, China bought big quantities and placed the crude in its strategic petroleum reserve. China’s new PP and PX plants are integrated upstream into new refineries that can process the cheap oil into very competitive feedstock for the petrochemical plants.

The new PP and PX facilities are also state-of-the-art and are thus far to the left of the cost curve. This in my view means that China’s new PP and PX capacity will be run very hard in 2020.

If we assume that the growth in January-April continues throughout the year, local output will reach 19m tonnes. This would mean full-year net imports falling to 9m tonnes from last year’s 15m tonnes! This would of course be 6m tonnes lower – a 40% reduction.

We forecast that China will account for no less than 93% of total global net PX imports in 2020 among the countries and regions that import more than they export. Negative Chinese growth combined with greater self-sufficiency would thus be a major blow to the overseas refining-to-PX majors whose entire business rationale hinges on China.

More immediately, the 21% rise in PX apparent demand in January-April points to overstocking. I’ve been warning since early May that Chinese apparent demand in petrochemicals in general might get ahead of real demand because of overconfidence about the real pace of recovery.

We may therefore see a destocking process in China across several petrochemicals. This could add to the downward pressure on petrochemicals prices caused by any decline in oil prices.

But in the PX market, the pain of destocking would, I believe, be borne by importers rather than local producers. For the reasons already described above, I believe local PX plants will continue to run hard.

The global petrochemicals business is thus facing a crisis on two fronts – global demand and Chinese supply. I am afraid that economic conditions are going to get an awful lot worse hereon in. Some producers may not even survive the crisis.

PREVIOUS POST Coronavirus will severely damage the developing world unless we take the right steps
NEXT POST China's big declines in 2020 PX and PP imports: the impact on its major trading partners