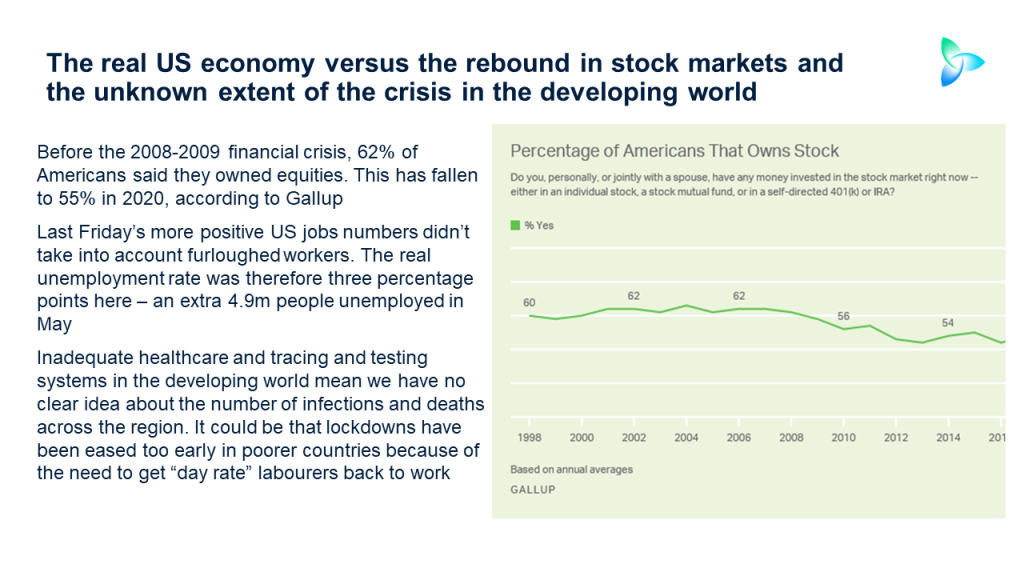 RISING equity and oil markets do not necessarily point to a V-shaped recovery. I know I’ve said this on several previous occasions, but it is critically important that petrochemicals companies and their customers see through the fog. I therefore need to re-emphasise the risks ahead.

This useful article from The Guardian presents three scenarios for progress out of lockdown. One is that we have reached the peak of infections with minor rises in the number of new cases from now until 2022. The second outcome is where the peak is still ahead of us and the third is where the number of new cases just about flatlines over the next two years – in other words, we are already out of the crisis.

A lot will depend on the science of the disease that the scientists do not fully understand. Is it more lethal or less fatal than other illnesses? Do we already have herd immunity or is herd immunity a long way off? Do we have to wait until a vaccine is available and has been produced, distributed and injected in billions of doses before we are out of the woods? Is a vaccine even possible?

Take the three graphs in The Guardian article and one could almost plot oil and petrochemical prices along the paths of the graphs. Under the first outcome, we would see a lot of small peaks and dips in pricing from now until 2022. The second outcome suggests a big run-up in pricing and then a major collapse as the peak in new cases is still ahead of us. As the third result would see no more peaks and troughs of any dimensions, this suggests much lower price volatility.

And yet, as I keep saying, one would have thought from recent events in equities and oil that the worst of times is definitively, without doubt, behind us.

But please consider that US stock market rallies don’t necessarily equal an improvement on Main Street. Before the 2008-2009 financial crisis, 62% of Americans said they owned equities, according to Gallup. This has fallen to 55% in 2020.

Last Friday’s release of more positive US jobs numbers for May led to a press conference by the president in the Rose Garden. It first appeared as if the headline unemployment rate had fallen to 13.3% in May from 14.7% in April. First reports suggested a gain of 2.5m jobs.

It has since become clear that the headline numbers didn’t take into account furloughed workers. The real unemployment rate was three percentage points higher – an extra 4.9m people unemployed in May, according to the US Bureau of Labor Statistics.

One of the problems of the 24-hour news cycle is that it is very heavily weighted towards coverage of the West where testing and tracing systems have greatly improved since the crisis began. Healthcare systems are now also less stretched than a few weeks ago.

But inadequate healthcare and tracing and testing systems in the developing world mean we have no clear idea about the number of infections and deaths across the region. It could also be that lockdowns have been eased too early in poorer countries because of the need to get “day rate” labourers back to work so they can feed themselves and their families.

The pandemic will push a further 100m people into extreme poverty and result in emerging and developing economies shrinking for the first time in 60 years, says the World Bank.

The levels of complexity are on a scale we have never seen before. Here is some more complexity for the petrochemicals business:

All of us are of course hoping for a V-shaped recovery. But be prepared for something very different.

Please also note that most people I have spoken to expect no recovery in all the lost petrochemicals and polymers demand until 2023 at the earliest. In other words, it seems likely to be at least two more years until demand is back where it was in 2019. Petrochemicals and polymers demand are a great barometer for the broader economy. When equity and oil markets wake up to this reality, downward corrections seem very possible.