Debate about refinery closures, re-configurations a harmful distraction for the petrochemicals business

In the second of a four-part series of blog posts that examines the paradigm shift confronting the petrochemicals industry – rising public and legislative pressure over plastic rubbish – I look at the harmful distraction of conventional thinking. Far too much of the debate within our industry is whether or not there will be enough hydrocarbon feedstock available in the future because of collapsing transportation fuels demand. This entirely, completely. misses the point. Part Three of my series will examine in the internal challenges facing petrochemicals companies as they attempt to do more than just talk about addressing the crisis. The final post will look at the geopolitical aspects of this paradigm shift. 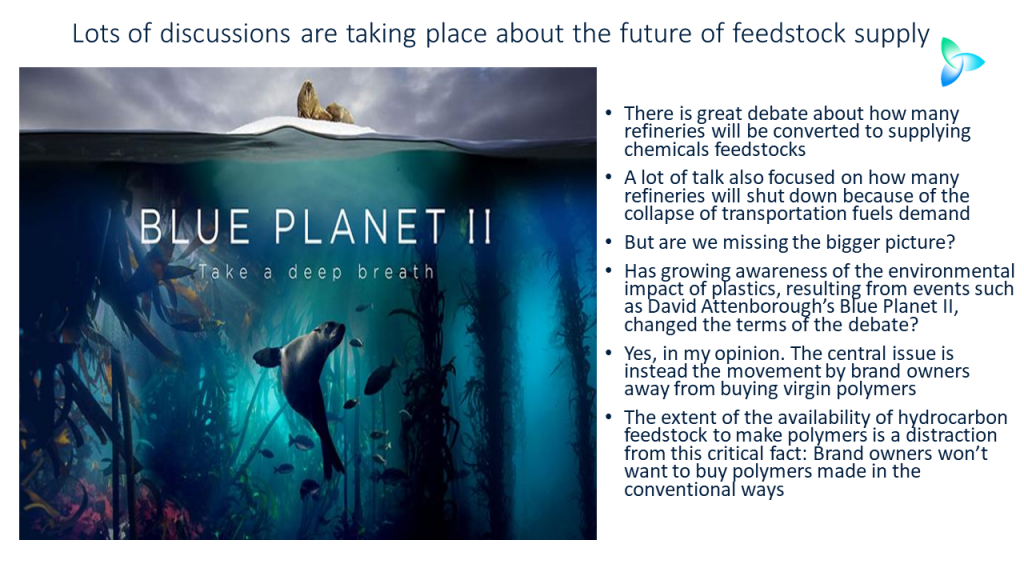 THERE is a lot of talk about oil refineries in the developed world being converted from mainly producing transportation fuels to a dominant focus on providing chemical feedstocks. But this assumes that people would want to buy the final output from reconfigured refinery-to-polymer complexes in sufficient volumes.

The logic behind the crude oil-to-chemicals (COTC) projects being pursued by companies such as Saudi Aramco and SABIC is that as demand for transportation fuels continues to decline, oil can be converted into bigger quantities of chemical feedstock in grassroot refineries (the Saudi Aramco/SABIC COTC project is, by the way, being reconfigured).

COTC project backers also assume that people will be willing to buy the final output from new refinery-to-polymer complexes.

Are you really that sure this will be the case? Last Monday, I discussed the sea change that I believe has taken place in the opinion of converters, brand owners and retailers over the last two years. What prompted this post was a discussion with Nigel Davis, ICIS Insight editor, who is one of the top thought leaders in our industry.

The discussion with Nigel led me to go through my reporter’s notebooks from the last three years. What the notebooks reminded me of were these two things:

You may have gained a different impression from your own conversations with converters, brand owners and retailers (I hope you are talking to them on a regular basis, as this an essential element of demand discovery).

But in my opinion, the Zeitgeist has shifted, and this is a permanent shift. We can see this from the wave after wave of legislation designed to change the ways that we produce, consume and dispose of single-use plastics.

We will never know whether the October 2017 release of Blue Planet II, the Sir David Attenborough BBC documentary, added the final and critical push to the change in public opinion.

But many people were clearly shocked by footage in the documentary of a pilot whale carrying her dead new-born calf. Sir David said it was likely the calf died because the mother’s milk had been contaminated with plastic.

Undoubtedly, a critically shift in the terms of the debate is the rise of the Millennials. This was highlighted in several of my discussions with brand owners. Millennials think differently from baby boomers. Millennials share a of way of thinking, via their smartphones, which emphases that “less is more”, unlike my fellow baby boomers who grew up in a period of consumption for the sake of consumption.

You may think that the dynamics in the developing world are very different from the developed world. I disagree. Firstly, this is because Millennials everywhere share the same philosophy, said an Indonesian-based executive with a major brand owner.

And secondly, developing-world governments recognise that the old plastic economy is unsustainable and will thus legislate as hard as Western governments. They are being encouraged by local opinion that is reacting to heavily polluted roadsides and beaches.

Legislation will be adapted and re-adapted

One of the frequent grievances I hear is that the politicians don’t understand the polymers industry. This has led to rules that don’t work in practice.

Take Australia as an example, where, despite strong legislative pressure and unilateral commitments from brand owners, there is a major shortage of locally made recycled plastic bales and pellets. The details of the EU’s €800/tonne levy on plastic waste have also been criticised.

Because the rules are viewed as not working, some people believe that they will have to be scrapped, allowing businesses to return to normal.

Rules will be adapted to fit the economic realities and will go through numerous iterations and likely, never be perfect. Nothing ever is. But the direction of the rules will be consistent – away from the old ways of doing business and towards a circular plastics economy.

“Hold on, what about the infrastructure? It simply isn’t there. There are nowhere near enough recyclers and the number is declining as they go bust because of the collapse of oil prices. Collection systems for plastic waste are inadequate. The infrastructure barriers are insurmountable,” I can hear you say.

In this case, what is useful is Daniel Yergin’s great book, The Prize – about the history of the oil industry. When the internal combustion engine was invented, and we found a use for the gasoline fraction other than dumping it in rivers, there was no gasoline infrastructure. There were no storage tanks, pipelines and gasoline stations.

The infrastructure was developed remarkably quickly, first in the US and then everywhere else, as the automobile moved to the very heart of our lives.

Why? Because the social, economic and political pressures were there to make this happen. Naphtha from the refineries was used to make PE and PP etc.

I can also hear you say that plastics recycling isn’t economic, particularly today with oil prices so low (in my view, crude prices will stay low, barring geopolitics because we have reached Peak Oil Demand).

It depends how you define economic. Is it really economic to throw away a plastic bottle or a layer of film after one use in a country that has to import most, if not all, of its oil and gas? Of course not. This is a huge waste of energy, and so, economic value.

Is it economic to allow at least 8m tonnes of plastic to be dumped in the oceans every year? No, because if we were to calculate the value of the damage to the environment this would be enormous.

On the issue of economics, let’s consider renewable energy. Government subsidies supported the industry as it got off the ground. It is now more cost effective on a kilowatt-per-hour basis than coal, oil or gas – and this is before you factor in the “externalities”, all the money saved from reduced pollution and fewer medical bills from people with lung diseases.

The development of the electric vehicle industry is following the same pattern. Heavy government support in regions such as the EU and in countries such as China, is getting the industry off the ground to the point it will be able to stand on its own feet.

The plastic recycling industry will, I believe, follow the same pattern of heavy government support to the point where standalone economics will beat virgin plastics. And as plastic rubbish disappears from the beaches of Bali and Phuket, as millions of new jobs are created in the recycling industry, and as countries save money by not having to import oil and gas, the wider economic benefits will be substantial.

But even if am wrong virgin plastics remain more competitive than recycling on a cost-per-tonne basis for many years to come, there is a more fundamental problem here: brand owners won’t want to buy virgin plastics!

This returns us to the beginning. There is little point in converting refineries to make chemical feedstock that then make virgin polymers because, in my opinion, the downstream demand will not be there. The debate about chemical refineries is distracting us from the central issue.

The same applies to whether refineries will close down in such large numbers that polymers producers will end up short of hydrocarbon feedstock.  Talk of the alternative outcome is another distraction. If there is still plenty of hydrocarbon feedstocks around in five years, the problem will still be that the brand owners will not want to buy virgin polymers.

Do not be side-tracked by debates that are largely academic. What matters, instead, is understanding the societal and political changes all the way downstream to the supermarket shelves.

These are scary times. Change is always frightening. But think of the manufacturers of horse-drawn carriages in the early 20th century and the opportunities they had to move into making automobiles. The ones that stayed with horses went out of business. Those that switched to making cars survived, with some making lots and lots of money.

PREVIOUS POST Developed world polymers demand: layer after layer of new complexity
NEXT POST Why China's polyethylene imports could be either 22m tonnes or 3m tonnes in 2030