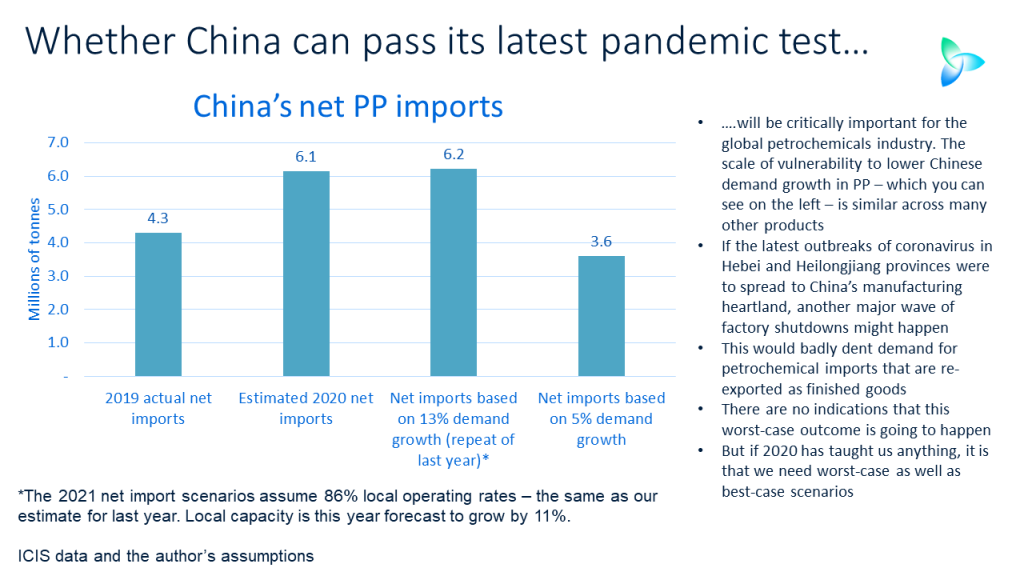 CHINA FACES another test of its pandemic control capabilities because of new outbreaks in Hebei and Heilongjiang provinces. On Wednesday, China recorded its first coronavirus death in eight months in Hebei.

From an economic perspective, the good news, as CNBC reported, was that “Heilongjiang accounted for just over 1% of China’s GDP in 2019 and Hebei about 3.6%. Neither province is as important economically compared with those in the south eastern, coastal parts of China.”

But some bad news centres on how lockdown measures will affect nationwide consumer spending during the Lunar New Year Holidays which begin on 11 February, said the South China Morning Post. This is the period when millions of migrant workers and students normally travel to their family homes, bearing gifts.

China passing its latest pandemic test matters more than anything else for the global petrochemicals industry in 2021 because over the last 13 years, China has become the world’s biggest petrochemicals market across all products, overtaking the US and Europe.

Let us take polypropylene (PP) as an example as this is the product I am using, in today’s post, to illustrate industry-wide challenges and opportunities.  China accounted for 15% of total global PP consumption in 2000, according to the ICIS Supply & Demand Database.  We estimate that this rose to 41% in 2020.

So, clearly, if Chinese domestic consumption of PP were to suffer significant damage from the renewed outbreak, the global implications would be big.

There is a second aspect to this. If the worst were to happen (though there are no indications at this stage that the worst is going to happen) and the virus were to spread to China’s economic and manufacturing heartland, another major wave of factory closures might take place. This would follow the shutdowns that took place in February and March last year, before China had brought the pandemic under control.

China the single-biggest risk factor for 2021

If another wave of factory shutdowns occurred, China would be unable to export as many face masks, hospital gowns, electronics and white goods. This would reduce the demand for petrochemicals imports, which, in 2020, saw some big increases. A lot of the petrochemicals shipped to China are re-exported as finished goods.

China’s PP net imports jumped by an estimated 43% in 2020 on a year-on-year basis despite a big rise in local production. China is forecast to also have accounted for no less than 43% of total global net PP imports last year. This is among the countries and regions that imported more than they exported.

China factory closures might result in global shortages of personal protective equipment and of the other goods that we need for our pandemic lifestyle as China dominates so many global manufacturing chains. There would, in the short term, be few options to fully replace this lost supply.

Also think about the knock-on effect on the revenues of overseas companies that still depend on China for manufacturing or final assembly, despite the recent big shifts in outsourcing to other countries such as Vietnam.

I thus see events in China as the single biggest risk to another strong year of global petrochemicals demand growth, overshadowing the resurgence of the pandemic across much of the rest of the world.

To understand why, we need to consider the context of what happened last year. Profound changes in the nature of global end-use petrochemicals demand – which the ICIS pricing team identified from Q2 last year and which were confirmed by our data – comprised:

There were obviously major downsides as well. Many developing countries other than China saw remittances from migrant workers collapse as workers were laid off because of lockdowns. Governments with weak sovereign debt ratings struggled to find sufficient stimulus to support unemployed workers and bolster severely stressed healthcare systems.

Heavily tourism-dependent countries, such as Greece, Spain and Thailand, suffered badly, as did airlines, hotels, restaurants, the auto industry and city centre retailing.

Lack of visibility on what is really happening in China

BUT – and this is the crucial but – on balance, as I have detailed in PE and PP in previous posts (and I believe the same was the case for several other petrochemicals), demand was better in 2020 than in 2019.  The fundamental changes in markets added more to total consumption than was taken away by all the negatives, along with China’s rapid recovery from April onwards.

So, we can expect the same in 2021, regardless of the success or otherwise of bringing the global pandemic under control, provided the Chinese economy stays healthy and it can continue to operate as the workshop of the world.

O course I have no clue whether China will pass its latest pandemic test. Nobody has any clue. How can anyone have any idea, given the unprecedented and unpredictable nature of events in 2020? And a particular problem, as always with China, is finding reliable on-the-ground information on the true extent of the latest pandemic.

But this shouldn’t hold back scenario planning, using ICIS data, hence the above chart where I present two scenarios for 2021 PP imports. Let me explain this chart in detail.

Because domestic capacity was expected to see a big increase in 2020 – and because 2019 import growth was strong – everyone I spoke to had expected last year’s net imports to crater.

Instead, if you take the January-November data and annualise it (divide by 11 and then multiply by 12), this leaves last year’s estimated total net imports at 6.1m tonnes. As I said earlier, this would be 43% higher than in 2019. This is despite a forecast 8% rise in 2020 domestic production.

Last year’s demand growth looks likely to have been around 13%, the biggest increase since 2009 during the bounce back from the Global Financial Crisis. This was, as already mentioned, the result of China’s rapid post-pandemic recovery. The surge in Chinese exports of finished goods probably played the biggest role in this recovery.

Let us assume, in the best of outcomes, that 13% PP demand growth repeated in 2021. Let us also assume that local operating rates are the same as we estimate for last year – 86%. Despite a forecast 11% rise in local capacity, net imports would remain at an extremely healthy 6.2m tonnes.

But if demand growth were to fall to 5%, and again assuming local operating rates of 86%, net imports would decline to just 3.6m tonnes.

This underlines why you need our constantly updated data and market intelligence across all the petrochemicals as you try to navigate the China market. For details of how we can help, contact me at john.richardson@icis.com.