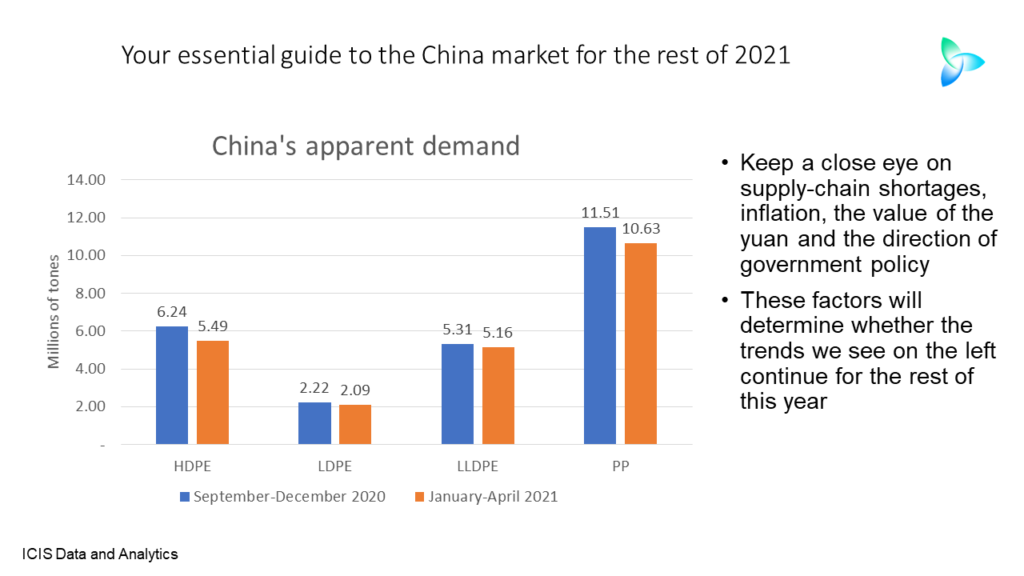 IT REALLY IS EXTRAORDINARY how commentators continue to use year-on-year comparisons for the Chinese economy in H1 this year versus the first half of 2020.

Demand was of course always going to be better in H2 2021, provided China maintained control over the pandemic, because the economy came to a virtual halt in H1 2020.

When, for instance, people refer to the year-on-year 18.3% growth in GDP growth in Q1 2021 this is largely irrelevant.

What this tells us that there was a moderate loss of economic growth momentum in the early part of this year versus late 2021.

For the reasons detailed above, I only been comparing early 2021 numbers to those for late 2020.

Because growth late last year so was stellar, so fantastic, perhaps some cooling-off was inevitable. And let me stress again, the loss of momentum is only moderate. This is hardly the end of the world and a reason for panic.

But I believe, from talking to as many people as possible and reading around the issues, that this is not just an inevitable cooling off from an exceptional H2 2020 economic rebound. (The boom was mainly driven by the big jump in Chinese exports as China provided the world with all the things it needed for lockdowns).

China struggled to find sufficient container-freight space, and where space was available at the right cost, during the early months of this yea. This meant it was unable to fully maintain its stunning H2 2020 export growth, I’ve been told.

Again, though, the data comparisons I can find for exports are only year-on-year. These comparisons are again pretty much irrelevant.

The container issue is nuanced, however. Not all Chinese ports are reported to have struggled with shortages, and, for a while, China-Europe and China-US freight rates fell from record highs.

But as Hellenic Shipping News reported on 3 June, forty-foot equivalent (FEU) container rates on both the Far East to Europe and Far East to US routes had picked again from mid-April onwards after a decline from March onwards.

Rates from the Far East to the US West and East Coasts were at $4,607/FEU and $5,922/FEU on 27 May. Both these rates were above their previous record highs earlier this year.

But nobody obviously knows for sure. All we can say for certain is that global supply chains in general remain under huge pressure because of distortions caused by the pandemic.

And here is a confession. I do get things wrong! I may have underestimated the risks to the global economy from inflationary pressures that I saw a few weeks ago as only temporary. I will revisit the inflation subject in detail in a later post.

Inflationary pressures are largely due to shortages of everything from labour to wooden pallets and metal drums, as well as container space and semiconductors.

Clearly, therefore, global inflation is another threat to the Chinese economy we need to evaluate. If US policymakers are forced to raise interest rates quicker than they would like, Chinese exports might suffer if consumer spending declined.

And in China itself, as ICIS news reported on 2 June (click here for the free-to-view article), inflation is also a problem.

A rise in domestic inflation had led to a sharp appreciation of the yuan (CNY), reported ICIS news. Inflation has gone up because of the rising cost of imported commodities, including petrochemicals.

The reserve requirement ratio for foreign exchanges deposits was to be increased from 15 June, the first time in a decade, in an attempt to reverse the rise in the yuan, added our wire service.

A stronger yuan is a further threat to China’s vital export trade as it reduces export competitiveness.

China’s “two sessions” political meetings, which I reported on in detail in April, set the ideal direction of China’s economy over the next 15 years.

I say ideal because policies may well be adapted to fit short-term circumstances. This has often happened in the past.

Take the People’s Bank of China’s decision to increase the reserve requirement ratio as a case in point.

The “two sessions” emphasised the need to boost domestic consumption and focus less on exports – the “dual circulation” strategy.

This suggests China should be happy with a stronger yuan as it makes exports less of an economic driver while making imports cheaper.

But it seems as if the short-term shock of the container freight and semiconductor shortages, along with rising inflation and the stronger yuan, are too much to deal with in a short timeframe without policy adjustments.

This is an important year for China is it marks the 100th year of the founding of the Chinese Communist Party. It is therefore imperative that China hits its official target of 6% GDP growth for 2021.

Any signs that the official growth target might be under threat could lead to policy adjustments counter to the “two sessions” objectives.

The meetings also stressed the need to deal with China’s debt problems. This has led to further declines of lending via the shadow or private banking system during 2021. This lending tends be speculative and so risky.

“State-owned banks are strongly biased towards lending to state-owned companies. This is creating problems for private companies as they mainly source their funding from private banks,” the consultancy added.

There would be major restructuring of private companies as part of delivering, said the consultancy.

China is also said to be focusing on reducing lending by heavily indebted local governments. Manufacturing and infrastructure investments by local governments have been major drivers of economic growth during the last 13 years.

The “two sessions meetings” also stressed the need for more sustainable economic growth. This, I believe, helps explains power shortages in southern China since mid-May, which we detail in this also free-to-view ICIS news article.

Power shortages are partly down to booming exports (southern China is part of China’s export heartland), it has been suggested.

But for the reasons explained above, I believe export growth cooled-off during H1 2021 versus H2 last year.

What I instead think is that China’s carbon emissions programme – part of its sustainability push – has led to local governments being reluctant to expand coal-fired electricity supply to meet rising demand. Demand has gone up because of hot weather.

What to look out for during the rest of this year

The huge value of the ICIS China petrochemicals data is again underlined by the above chart.

What you are seeing is China’s apparent demand (local production plus net imports) for the three grades of polyethylene (PE), and also polypropylene (PP). This was in the four months from January to April this 2021 versus the four months from September to December 2020.

As mentioned above, this confirms the moderate economic slowdown. High-density PE apparent demand (HDPE) was down by 12%, low-density PE (LDPE) by 5%, linear-low density PE (LLDPE) by 3% and PP by 8%.

Absolutely, we must take these numbers with a large pinch of salt. It is far too early to conclude that this means a bad year for demand.

Then from May onwards, China got on top of the pandemic, exports boomed, and 2020 was a great year for petrochemicals consumption. History could easily repeat itself in 2021.

Keep a close eye on inflation levels globally and in China, the state of container freight and semiconductor markets, the value of the yuan and the direction of Chinese government policy.

Changes in all the above will provide the pointers you need to assess where China’s petrochemicals demand is heading.

As always, I hope this helps. For further help, please don’t hesitate to contact me at john.richardson@icis.com.