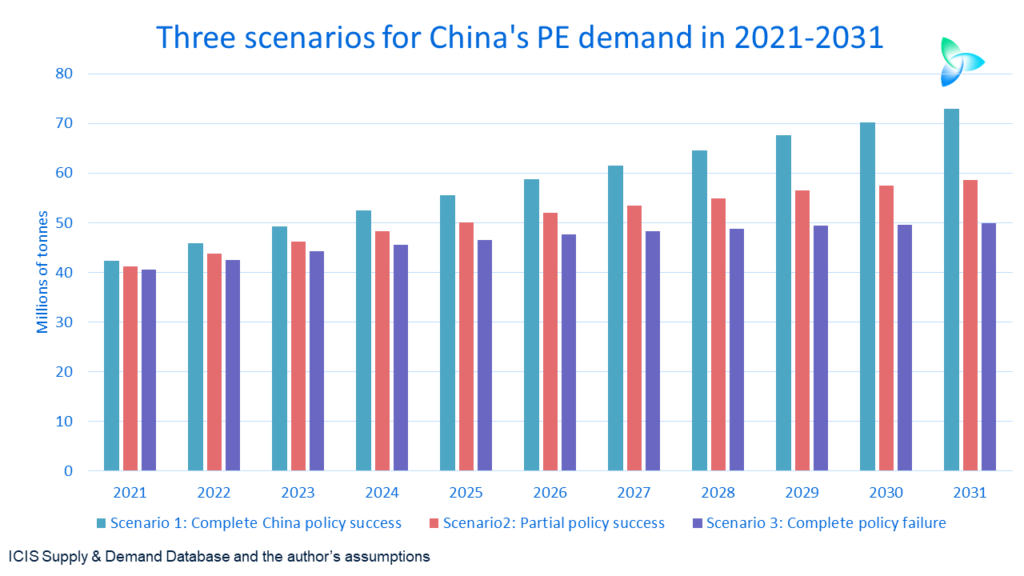 IT CONTINUES to surprise and disappoint me how every minutiae of the recent US petrochemicals outages have been pored over by analysts and yet relatively little attention is being paid to plant operations in China and the real, underlying nature of the country’s petrochemicals demand. This is despite China being far more an important petrochemicals market than the US.

The critical unanswered question remains whether China’s growth during the first two months of this year was better or worse than the stellar Q4 2020, when China enjoyed a tremendous export-driven economic rebound.

The root of the problem is we don’t have all the data we need on China and where we do have the data, questions are often asked about the accuracy of official numbers. Take for example the claim that China’s retail sales contracted by 4.8% in 2020 versus the official estimate of a 3.9% decline.

But just because we don’t have the data doesn’t mean we shouldn’t devote much more effort to understanding China.

The same disproportionate focus on the US versus China applies to the media coverage of last Thursday’s ceremony at the White House, where Joe Biden signed into law his administration’s $1.9tr stimulus package, versus last week and the previous week’s “two sessions” political meetings in China.

A problem with US politics is we never know what is going to happen from one mid-term election to the next presidential election and then onto the next mid-terms. These two-year time spans can see power shift backwards and forwards between the Republicans and Democrats, leading to radical changes in policy direction.

Joe Biden also lacks a filibuster-proof majority the Senate. While the stimulus package went through because it is a finance bill, and so therefore not subject to the filibuster, the same will not apply to his infrastructure and green investment proposals. There is every chance that most of the rest of his agenda will be undermined.

China, though, is of course very different because of its political system. We can therefore anticipate policy stability over long periods of time.

This year’s “two sessions” – the meetings of the National People’s Congress (NPC) and the Chinese People’s Political Consultative Conference (CPPCC) – carried even more long-term significance than usual. The meetings set the headline policy direction not just for the next Five-Year Plan, China’s 14th (2021-2025), but also for all the years until 2035.

So, what conclusions can we draw from this year’s “two sessions” concerning China’s economic direction?

This is in response to the widening US/China split. The split has led to US sanctions on China, which are restricting China’s access to the higher value technologies it needs to escape its middle-income trap.

Let us look at each of these headline policy objectives and consider different outcomes.

We should begin by reminding ourselves of the big challenges China faces in achieving its headline objectives.

We don’t know who will win the new Superpower struggle. But we do know that it remains an intense struggle, as much under Biden as it was under the Trump administration.  There is bipartisan US consensus that China’s rise needs to be contained. The consensus was formed around five years ago.

Access to supplies of rare earths and high-value (5 nanometres and below) semiconductors will play a big role in determining whether the US or China wins the new cold war.

Both the raw materials are vital for the next phase of global economic growth. This phase will be heavily reliant on leaps forward in digitalisation, which can obviously only happen if there is sufficient supply of rare earths and super-smart memory chips.

Digitalisation could bring so many benefits such as scientifically rigorous life-cycle analysis that could be used to set carbon and plastic-waste taxes and credits.

Digitalisation may also support the development of smart grids and “the internet of things”. Better management of economic cycles through greater visibility of demand up and down manufacturing chains may also be enabled by digitalisation.

China appears to be in pole position to win the struggle for control of these vital raw materials. This is due to its control over supplies of rare earths and heavy government spending on developing high-value smart chip production.

But the Biden White House has recognised these two areas are risks for the US and is building a plan for new investment. Will, though, the US president be able to get the legislation through the Senate to sufficiently raise US investment in these two critical supply chains?

If China fails to break its dependence on the US and Europe for higher value technologies, it will fail to escape its middle-income trap. The trap has been made very deep by its worrying demographic trends.

Demographers and economists believe that fewer babies were born in China in 2020 than in any year since 1961, when China suffered mass starvation. Capital Economics, the economics consultancy, predicts that China’s workforce will shrink by 0.5% per year, preventing it from overtaking the US as the world’s biggest economy before 2050.

I have been warning about the risks posed by China’s rapidly ageing population for the last 12 years. Here are some key statistics from an important 2018 study by the American Enterprise Institute:

The NPC discussed various initiatives to boost China’s birth rates. Ideas have long been discussed for increasing the retirement age which for women factory workers can be as low as 50. Progress so far, though, has been slow. Plans are being drawn up to improve healthcare and pension provisions.

But as Japan has discovered, reversing demographic trends is not easy. Once people are out of the habit of having big families, it is very difficult to change mindsets. Sure, China might be successful as it has so often been in the past with economic management. But success would take a very long time. You cannot manufacture babies overnight and China needs many millions more babies.

Given China’s rapidly ageing population, its Hukou residency registration system and its restrictions on private ownership of land, how easy will it be for China to achieve its “dual circulation policy”?

The policy, which centres on a heavy focus on raising domestic consumption, was the cornerstone of last October’s Fifth Plenum meeting. This was followed by dual circulation policy discussions and announcements during the 2021 “two sessions” meetings.

Also, China’s export competitiveness depends on what Michael Pettis calls wage suppression. The China economist estimates that if China were to raise its local spending as a proportion of GDP to be broadly in line with other developing economies, ordinary households would have to recover least 10-15 percentage points of GDP. This would be at the expense of businesses and the wealthy.

China’s retail sales fell in 2020 as its economy became even more dependent on exports. It was therefore only booming export demand that enabled China to achieve GDP growth of 2.3%. China was the only major economy that achieved positive GDP growth last year.

The South China Morning Post, in this article, reported that as exports boomed in 2020, income inequality also increased.

“According to a joint nationwide survey of more than 70,000 households by Gan’s university and Ant Group Research, the income growth of households with annual incomes below yuan (Y) 50,000 was the slowest among all income groups,” the newspaper wrote.

“Those with annual incomes greater than Y300,000, the highest bracket, fared best, thanks to stable jobs and good investment gains,” added the SCMP.

During the NPC, Li highlighted the need to address income inequality. He pointed out that 40% of the Chinese population lived on less than $5 a day in 2020.

The 14th Five-Year Plan aims to address the challenge through reforming the Hukou system, improving public services and bolstering the social security network.

But reducing income inequality is clearly not going to be easy, especially given that it has been made worse by the pandemic.

Here is another problem as regards boosting domestic spending, which was again highlighted by the SCMP: China’s household debt rose to the equivalent of 60% GDP in Q3 last year from below 40% five years ago, according to the government’s National Institution for Finance and Development.

Can China square this circle? Or will domestic consumption remain a small proportion of China’s GDP relative to other economies? What would happen to China if it lost its high-technology race with the US?

None have of course the faintest clue about outcomes of all the above All we can therefore do is constantly pore over Chinese government policy and talk to good people on the ground in China as often as possible. We must also try to avoid the personal biases that all of us bring to this kind of analysis.

This is a great deal easier said than done, but what other choice do we have unless we want to remain permanently at sea about the world’s most important market?

We can also scenario plan, using the ICIS Supply & Demand Database. The chart at the beginning of this blog post – which is very much back of the envelope and is merely designed to get your planning process going – presents three scenarios for Chinese PE demand growth in 2021-2031.

The chart only shows scenarios for growth across all three grades of PE. For individual breakdowns for high-density PE, low-density PE and linear low-density PE, contact me at john.richardson@icis.com

Complete policy failure is Scenario 3. China fails to escape its middle-income trap, loses the geopolitical struggle with the US and fails to substantially raise domestic consumption. Demand rises by 5% this year with 2021-2031 growth averaging 2%. Cumulative demand is at 514m tonnes, 128m tonnes lower than Scenario 1 when you round the numbers up to the nearest millions

As I said, this kind of analysis is a great deal easier said than done. But, in my view, there is no more important a task for your planning department.