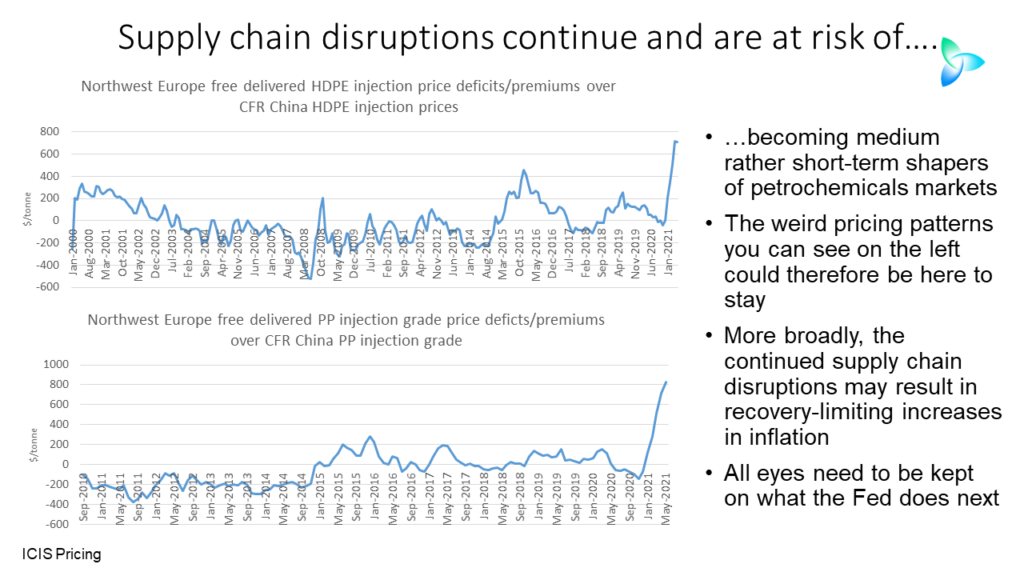 OK, I MAY have got this wrong. Inflation could be a bigger problem than I envisaged only three weeks ago. But if so, I would at least be in exalted company.

A meeting of the US Federal Reserve concluded that generalised inflation was not a concern, and that “finished goods have not been subject to pervasive upward cost pressures”.

The meeting took place in December 1964, just two weeks before what the Fed now calls The Great Inflation, a 17-year period of economically disruptive increases in the cost of living.

When I was growing up in Britain during the 1970s, stagflation prevailed, one of the worst economic trends of them all. This involved low growth and high inflation.

Perhaps today’s Fed policymakers are in danger of repeating the mistake by categorising some of the 2021 inflation drivers as temporary, just background noise, when in fact the drivers are medium or perhaps even long-term influencers.

Economist Stephen Roach writes that in 1964, Fed chairman Arthur F Burns co-authored a paper arguing that exogeneous factors such as oil prices should be excluded from core inflation measures, as the cost of oil had nothing to do with long-term inflation.

As we all now know with the benefit of hindsight, the oil shocks of the 1970s became core to inflation. In 1973, because of the Middle East oil export embargo that resulted from US support for Israel in the Yom Kippur War, oil prices quadrupled.

Nobody seems to be suggesting that we are on the cusp of another Great Inflation because of the now (at long last) broadly recognised disinflationary force of ageing populations in the West. When you are old, you buy less things.

In China, too, the population is ageing.  I believe this makes it imperative for China to keep its raw-material input costs low by obtaining oil, gas and petrochemicals imports as cheaply as possible.

China’s push to petrochemicals self-sufficiency is also driven by the desire to get hold of competitively priced raw materials to compensate for the economic drag of an ageing population.

I don’t think we need to worry about the cost of exports from China going up over the long term as its wage costs continue to rise.

China has already offshored lots of low-value manufacturing to countries such as Vietnam, Laos and Cambodia. This trend will accelerate for geopolitical as well as demographic reasons through the Belt & Road Initiative.

But we do need to worry about pandemic-related inflationary trends dragging on for a considerable while longer. Extreme weather events are adding an extra layer of inflationary risk that could be long-term.

Supply chain disruptions caused by the pandemic have driven inflation higher. These include the global semiconductor shortages that will last for at least another year, according to Flex, the world’s third largest contract electronics manufacturer.

Chips are in short supply because of a drought in Taiwan reducing output by major chip manufacturer TSMC, a fire at a plant in Japan that supplies chips to the auto industry and booming demand for game consoles and computers etc because of lockdowns.

As I have been flagging up since February, the microchip shortage is one of the factors behind China’s moderate economic slowdown.

High container freight costs and shortages are also a major global problem, leading to the type of weird price distortions you can see in the above charts. These are updated versions of charts I’ve been providing since March.

Polyolefins arbitrage to Europe is in theory very strong because of robust demand and reduced local supply. But the theory is not turning into practice because of the lack of container space, especially on the Asia to Europe and Middle East to Europe routes.

European high-density polyethylene (HDPE) and polypropylene (PP) price premiums over China and southeast Asia have since March risen to their highest levels since ICIS began its price quotes.

Global freight rates declined from historic highs between mid-March and mid-April. But rates are on the rise again, as I discussed earlier this week, on the very important Far East to Europe and Far East to US West and East Coast routes.

Such is the nature of the pandemic that we should expect the unexpected. Further disruptions to supply chains seem inevitable because of the scale of the pandemic and the highly interconnected and finely balanced patterns of global trade.

During the Spanish Flu epidemic in 1918-1919, global trade was much less interconnected and finely balanced because there was a great deal less global trade.

An example of the unexpected occurred last month with the partial closure by Yantian International Container Terminals at Shenzhen. This was the result of dockworkers testing positive for coronavirus during an outbreak in Guangdong province.

“Unfortunately, this will only exacerbate the empty container problems plaguing the industry. The trucker shortages in China due to quarantine measures are propping up the price of transport.”

The myriad effects of the pandemic on supply chains includes a shortage of factory workers in China, said a polyolefins trader.

“Internet sales went up during the pandemic and have stayed at very high levels. Young people can now earn more money as internet delivery drivers than working in factories. This has led to labour shortages in some factories,” he added.

Labour shortages are also a problem in the US, but for a different reason. In the States, it is because federal furlough payments have been set at a national level, disincentivising workers in poorer rural areas from taking up jobs, as they are receiving more to stay at home from the government.

But the furlough payment scheme is being adjusted to try and to iron out the problems.

Labour shortages in the UK are partly the result of Brexit reducing immigration. People are also reluctant to take jobs in some sectors for fear that they wouldn’t qualify for government furlough payments if lockdowns resumed.

Petrochemicals are in short supply partly because of the pandemic. Demand for petrochemicals has boomed for the reasons I’ve detailed before. Supply has been constrained by a shortage of feedstocks from refineries and turnarounds delayed from 2020 until this year.

This brings me onto extreme weather events that have very probably become a permanent threat to supply chains. This is one of the outcomes of climate change.

This year’s US hurricane season, which began on 1 June, has a 60% chance of above being average severity. Extreme hot weather during the US summer may put further strain on electricity supply.

And as mentioned above, a drought in Taiwan has contributed to semiconductor shortages. TSMC is one of only three major global manufacturers of chips 5 nanometres or smaller.

The Fed’s policymakers need to therefore ponder whether extreme weather disruptions to supply chains are more than just background noise.

They might instead have become an element in core inflation. But forecasting future extreme weather events, and their impact on manufacturing and logistics, is extremely difficult.

Equally, though, central bankers in the US and elsewhere must consider the demand side of the weather equation.

A large proportion of the developing world is in the equatorial region – the region most exposed to climate change. Floods and droughts equal losses in consumption.

But US existing and planned stimulus programmes are greater than in the EU. And in the US, a lot of money has already been distributed whereas dispersal of EU stimulus is slower.

This explains why inflation in the US is higher than in the EU. One can go as far as to say that the EU might be happy inflation has crept back up to 2%, as this might indicate the end of long-term disinflationary pressures.

But mention this to EU plastic converters and they are likely to respond in rather impolite terms. For some EU industries such as plastic processing, cost pressures are huge.

The same applies to a wide range of raw materials used by many other industries in the EU and elsewhere. Shortages caused by the pandemic extend to wooden pallets, metal drums and tin cans.

China also seems to be an inflation hot spot. The May manufacturing cost sub-index of the Caixin/Markit Purchasing Managers’ Index expanded at its fastest pace since 2016.

This is a significant concern for our industry because China is by far the biggest driver of global petrochemicals demand.

But if inflation is a major problem in China, why are HDPE and PP prices so low relative to Europe? Again, see the above charts. Note that the pattern is the same in other petrochemicals and polymers.

One reason is, as I said, that container freight deliveries to Europe seem to be more difficult than to other regions.

China’s government is focusing on reducing debt and cleaning up the environment. These are two disinflationary forces.

A third disinflationary force is rising self-sufficiency in HDPE and PP – another explanation why Chinese prices are so cheap versus Europe.

The above headline summarises the dilemma facing the Fed because, as we have seen, the threat from inflation is far from straightforward.

What the Fed does over the next few months will have major global implications, as is always the case.

If the Fed were to raise the cost of borrowing, this would make it more difficult for the developing world to borrow money at a time when the region needs increased funding.

The decisions that China takes on inflation will also be so, so critically important. If inflationary pressures continue to build, Beijing might find it more difficult to relax controls on lending.

The economic slowdown in January-April – which we can see quite clearly from the declines in PE and PP demand – might as a result continue.

I’ve never pretended that this subject was going to be easy. But I do hope that, as always, these thoughts on inflation will help you plan for the next six months and beyond. If you need further help, please don’t hesitate to contact me at john.richardson@icis.com.