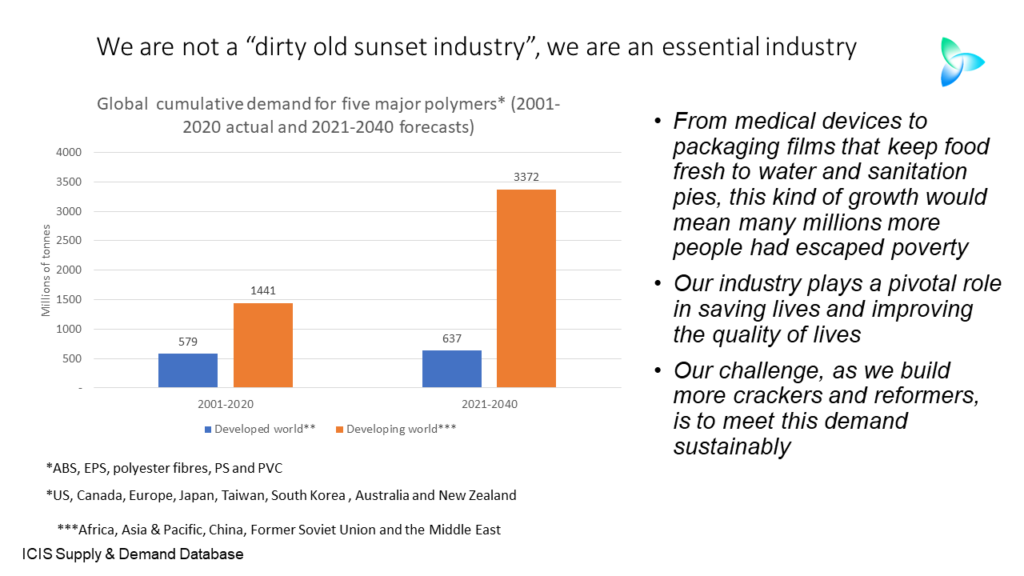 ONE OF THE GREATEST achievements of the last 30 years has been the fall in the number of people living in extreme poverty.

In 1999, 1.9bn of the world’s population were living on less than $1.90, the Word Bank’s definition of extreme poverty. Despite setbacks caused by the pandemic, this had fallen to 698m by October 2020.

Income levels alone are not enough to escape the life-threatening agony of extreme poverty. There is no point in having money if the essential goods and services to spend your money on are not available.

Critical to poverty alleviation has been sufficient supply of all the things that people in the rich world take for granted. The raw materials to make the vast majority of manufactured goods include petrochemicals and polymers.

Nearly all the major manufacturing chains would not have been able to function without petrochemicals.

Think of medical equipment, syringes, blood bags, hospital gowns, face masks, pill bottles and medicine blister packs. None of the above could have been produced without petrochemicals.

Polyethylene (PE) and PET resin films ensured food was fresh enough to be safely consumed. One of the biggest causes of malnutrition in the developing world wasn’t lack of availability of food. It was instead illnesses caused by eating food that’s gone bad.

Mobile phones and motor scooters – again, of course, made from petrochemicals – allowed people to move further up the income ladder.

Phones were used to organise small businesses and access microcredit, and scooters to get to markets and meetings on time.

Polyester clothing was cheap, durable and could be produced in big volumes without taking land away from food production to grow cotton.

As tens of millions of people moved further up the income ladder, well beyond extreme poverty, they were able to afford computers, TVs, washing machines, refrigerators and automobiles for the first time.

This explains the data on the left of the chart at the beginning of this blog post.

What you can see is global demand for five of the major synthetic resins – acrylonitrile butadiene styrene, expandable polystyrene, polyester fibres, polystyrene and PVC – spit between the developing and the developed world. Here I focus just on the 20 years from 2021 until 2020.

The ICIS Supply & Demand data show that in the developed world, cumulative consumption of the five polymers was 579m tonnes. In the developing world, it was 1.4bn tonnes.

The next 20 years will be even more about the developing world, if you include China

Now look at data on the right-hand half of the above chart.

It is a similar story in PE and polypropylene (PP), as I discussed last week.

In 1990, there were more than 750m people in China living below the international poverty line – about two-thirds of the population, according to this BBC news article.

If you add China to developed world totals in 2021-2040, the numbers look entirely different.

The developed world plus China would account for 3bn tonnes of cumulative consumption versus 993m tonnes in the remainder of the developing world – Africa, Asia & Pacific, the Former Soviet Union, the Middle East and South & Central America.

But last year, Chinese Premier Li Keqiang said China still had 600m people whose monthly income was yuan (CNY)1,000 ($154). He said this was not enough to rent a room in a city, the BBC again reported.

China is also likely to serve as the nexus for the developing world. This would be through outsourcing low value manufacturing, imports of raw materials including oil, gas and petrochemicals and infrastructure investments via its Belt & Road Initiative.

It therefore makes sense to keep China in the developing world column.

Conventional petrochemicals the only way to meet this demand

We should all want to see this level of petrochemicals growth in the developing world as it would indicate further progress in the battle against extreme poverty.

This type of growth would also mean many people moving a long distance from extreme poverty and into middle-income status.

We must be realistic about how this demand is going to be met. Recycling technologies are unlikely to be anywhere close to sufficiently scalable to meet the new demand.

The reason is that the process breaks mixed plastic waste down into naphtha. The naphtha can be used to make any polymer. Mechanical recycling provides a more limited range of polymers.

But chemicals recycling is thought to be ten years away from commercialisation. Commercial plants are likely to be very small in scale.

So many chemicals recycling plants would have to be built to meet demand that the investment costs would be big.

It is also important to note that, along with naphtha, chemicals recycling plants produce significant quantities of diesel.

Might the increased availability of diesel discourage adoption of electric vehicles? What would this mean for the carbon balance of chemicals recycling versus conventional petrochemicals?

We must also consider how deeply embedded petrochemicals are into manufacturing chains.

Some single-use plastic applications could be replaced by other materials as sustainability pressures build.

But just imagine the R&D and capital costs of replacing conventionally made plastics in autos, medical devices and medical packaging, white goods and electronics. This assumes that R&D is successful in the first place.

If we are going to meet 134% growth in demand for the five polymers in the developing world – growth that, as I said, we should all want to happen – the only realistic option is to build more conventional petrochemicals plants.

The pressure to build more sustainable capacity is growing

One sensible question to ask is: how many conventional plants will be built in a sustainable fashion, employing carbon mitigation technologies?

Another valid question on our industry’s exam paper is: where will most of the new plants will be built?

“Shareholders are turning up the heat on major oil companies, pushing for shifts in strategy to deal with climate change,” wrote Joe Chang, editor of ICIS Chemicals Business in this ICIS Insight article.

“This will only accelerate efforts by oil as well as chemical companies to decarbonise, with very real consequences for future supply. On 26 May, three major oil companies – ExxonMobil, Chevron and Shell – were in the spotlight,” he added.

Engine No 1 is pushing ExxonMobil to set emissions reduction targets consistent with the Paris Agreement – essentially getting to net zero by 2050 – and take advantage of energy transition opportunities.

A shareholder proposal for Chevron to substantially reduce its Scope 3 greenhouse gas (GHG) emissions opposed by management won 61% of the vote at its annual meeting.

Meanwhile, in the Netherlands, Shell was ordered by a district court in The Hague to reduce GHG emissions by 45% by 2030 versus the company’s intermediate target of 20%. Shell, which has already committed to net zero carbon emissions by 2050, will appeal against the ruling.

The Insight article also reported that:

The landmark IEA report on the path to net zero

Fossil fuels’ share of the global energy mix would have to fall from almost four-fifths today to just over one-fifth by 2050, said the IEA.

Beyond projects already committed as of 2021, there would be need for new oil and gas investment in its net zero roadmap, the IEA added.

This is a stunning development given the multinational energy group advises its 28 countries on energy policy. The countries are either members or associated members of the IEA.

This transition would place further pressure on refineries already struggling with the transition to electric vehicles. More refinery closures would happen, except perhaps for refineries that refocus on their output on supplying petrochemicals, said the IEA.

As for petrochemicals, the IEA wrote: “Demand for petrochemicals is expected to grow by 30% by 2050, but producers will have to dramatically reduce carbon emissions through use of existing and new technologies, including electric crackers, hydrogen and carbon capture and storage.”

The share of petrochemicals production with carbon mitigation processes needed to increase from just 1% in 2020, to 13% in 2030 and 93% by 2050 if the net zero target were to be achieved, added the IEA.

Perhaps. This depends, as I said, on whether the sector can be carbon neutral. I don’t think we have sufficient life-cycle analysis to reach firm conclusions. We must also consider the investment costs.

We need to make progress on carbon, however, as the core of the problem for our industry is this: the chemicals, steel and cement sectors accounted for around 70% of CO2 emissions from all industries, with the spit between the three sectors about even, said the IEA.

The big Western companies face the most investor pressure.

BlackRock, the world’s largest asset management company, was behind some of the Engine 1 nominees to the ExxonMobil board. Investors in general may well run shy of further loans to hydrocarbon projects.

Many of the energy-to-petrochemicals companies in the developing world are either partly or entirely state-owned. They may not therefore face the same funding pressures.

One might argue that refinery investments will continue at apace in China, with much of the output dedicated to providing petrochemicals feedstock.

Petrochemicals plants built in the developing world may not employ new carbon mitigation technologies, such as electric furnaces and green hydrogen, for cost and access to technology reasons.

Meanwhile, the Western companies could be limited in their ability to expand petrochemicals capacity because of the extra costs of carbon mitigation – and difficulties in obtaining financing for any hydrocarbons project.

But I don’t see this is an outcome as I have detected a firm commitment to reducing carbon, having talked to industry leaders in Asia and the Middle East.

I believe China will go down the root of developing its own carbon mitigation technologies for both refining and petrochemicals plants.

This would help China move up the manufacturing value chain as it tries to escape its middle-income trap. Walking the talk on reducing emissions would boost China’s international standing and geopolitical position.

Carbon border taxes could come into the mix if some countries don’t cut industrial carbon emissions in general. As the IEA data show, it would be very hard to cut overall industrial emissions without addressing emissions in petrochemicals.

Industries in the EU would want a level playing field. Carbon border taxes might be imposed on imports of finished goods by the EU from countries viewed as insufficiently carbon compliant.

The EU was China’s biggest trading partner in 2020. China is already struggling to maintain its export competitiveness because of rising labour costs resulting from an ageing population.

What is not in doubt is the huge scale of new petrochemicals demand in 2021-2040. Our exact numbers could be wrong, of course, but the trajectory will be the same.

Many more millions of tonnes of petrochemicals consumption in the developing world will require a lot of new supply.

And whilst recycling can play a role, an important one, it is unrealistic to expect production via recyclate to be anywhere close to big enough to meet the new demand.

The key challenge we must address as an industry is how to build new crackers, reformers and downstream plants in much more carbon-efficient ways.

And we must stop talking so much about recycling and focus more on the challenge of solving the global plastic waste crisis. This can only be done if adequate rubbish collection systems are provided for the 3bn people who lack such systems.

As we seek more sustainable ways of running our businesses, we should also make sure the public and legislators are fully aware of the essential role petrochemicals in providing so many vital goods and services.

We are not a “dirty old sunset industry”. We are an industry that people cannot do without.