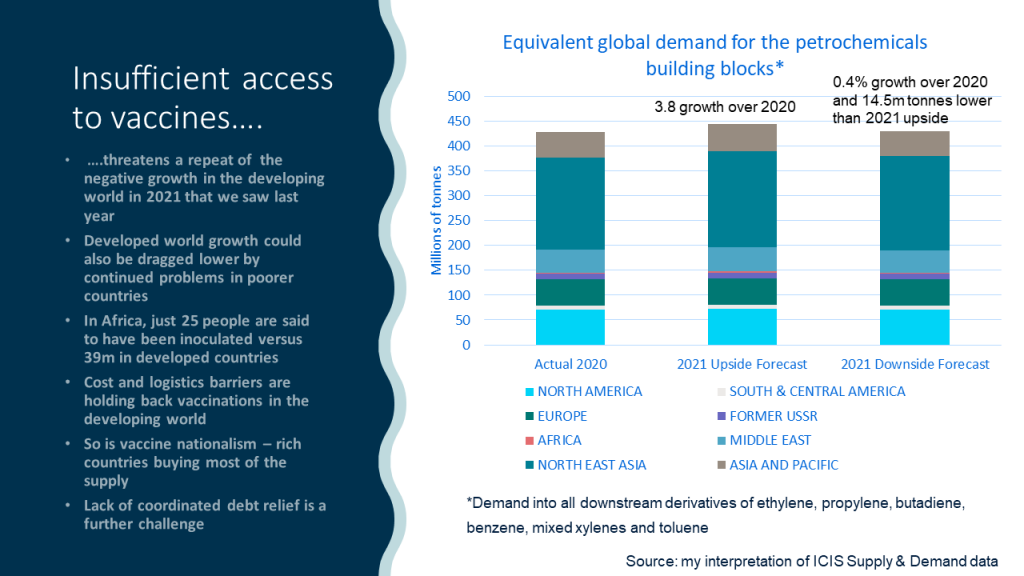 WE LIVE in a highly interconnected world as this statistic underlines: of the $18tr worth of goods that were traded last year, intermediate goods or components of finished goods represented $11tr, according to the Organisation for Economic Cooperation and Development.

In the key automotive, textile, retail and construction petrochemical end-use industries, many intermediate products are made in developing countries outside China.

The developing world ex-China is of course also a major source of economic growth by itself, home to all the tens of millions of people who supposedly join the global middle class every year (in reality, though, this term is very misleading as middle class raises the notion of middle class by Western standards. As I have long argued, the reality in the developing world is very different).

Back to my main point. Because of the constant march of globalisation since the collapse of the Berlin Wall in 1989 and huge advances in technology, we live in a world where we all depend on each other for our economic prosperity.

A major risk to this prosperity is highlighted in a new study by Istanbul’s Koch University, Harvard University and the University of Maryland, sponsored by the International Chamber of Commerce.

The study presents two scenarios. In the worst-case outcome, where most of the populations of developed countries are inoculated against the pandemic with the developing world largely shut out, the damage to the global economy amounts to $9tr.

But the study’s authors see a more probable outcome of half the population of the developing world being inoculated against coronavirus by the end of next year. This would inflict between $1.8tr-2.8tr of economic losses on the world because of a still very uneven distribution of vaccines.

The challenges for the developing world do not just relate to access to vaccines. Many poor countries entered the crisis with heavy debt burdens and have thus been unable to provide income and healthcare support anywhere near as substantial as developed countries.

“Private creditors have refused to participate in a modest debt suspension programme forged by the Group of 20. The World Bank and the International Monetary Fund [IMF] both promised major relief but failed to produce significant dollars,” wrote the New York Times in this article.

What is therefore critical, as the authors of the study so rightly point out, is that we don’t just view help to developing countries as merely a moral issue. It is in all our economic interests to ensure that the developing world gets the access to vaccines and the economic support it needs.

The above statistics are from Samantha Power, the Biden administration’s nominee for director of the US Agency for International Development.

The Covax vaccine relief programme has so far raised $11bn towards its funding target of $38bn to pay for vaccines for the developing world. But as the number of vaccinations in Africa indicates, distribution must also be a significant problem.

One of the difficulties of distribution relates to the extreme cold storage required by the Pfizer/BioNTech vaccine. The vaccine – one of only two that have won approval for widespread international marketing – is, though, only moderately expensive, said The Guardian in this article.

But the newspaper added that the Moderna vaccine, the other vaccine that has won widespread international approval, is expensive and difficult for poor countries to afford.

We have sadly also ended up with the vaccine nationalism I first warned about last August. A Duke Global Health Institute study said that as of mid-January, 4.2bn of the 7bn vaccines that had been purchased globally had gone to high-income countries. High-income countries account for only 16% of the world’s population. Several rich countries have enough vaccines to inoculate their populations several times over.

Vaccine nationalism has led to a rise in the number of bilateral deals between vaccine makers and individual governments. These deals may not always be in the best interests of the countries, according to John-Arne Røttingen, Norway’s Global Health Ambassador.

“They [the bilateral deals) may be costly and some of the pharmaceutical companies can potentially use political pressure to increase their profits and encourage countries to go with bilateral deals, instead of the joint procurement Covax facility,” Røttingen told The Guardian.

But some good news is that the Biden administration has joined the Covax relief programme and has signalled support for extending the IMF’s special drawing rights by $500bn. The additional loans would be made available to the developing world.

And there are, of course, lots of good people everywhere working to resolve the challenges faced by the developing world, including those who run the Covax programme.

A great deal more, though, must done to avoid what Power said was a potential “catastrophic moral failure” – and, as I said, a major economic failure.

Further, as I have again been warning about since last September, we are at risk of a worsening refugee crisis and geopolitical unrest.

We may also be left with decades of resentment in the developing world towards the behaviour of rich countries. This could present China with an opportunity to increase its economic and geopolitical influence over the developing world, if it were to create goodwill by stepping into a breach left by the West.

All the above further supports my argument that the pandemic is one of the four megatrends that must be the bedrock of your planning process, the other three being geopolitics, sustainability and demographics.

I cannot stress enough the importance of starting with the four megatrends and constantly game-planning the ever-changing interaction between all four.

Let us take the example of the pandemic and how it will reshape the influence of demographics on economic growth.

A country such as India has long faced the challenges of poor infrastructure, a weak public education system and failure to make basic needs, such as adequate sanitation. China was a long way from creating enough new jobs for its very youthful people, even before the pandemic. The pandemic will further hinder job creation.

Then think of the Middle East which again has a very youthful population, and which faces the long-term collapse of oil prices – the result of the sustainability megatrend.

Lower government revenues from crude sales will jeopardise the region’s ability to create enough employment, as will the pandemic. The social and political tensions created by the lack of employment opportunities in the Middle East may lead to geopolitical unrest.

The wide range of economic outcomes for the developing world underlines another one of my core arguments: you need equally wide ranging and constantly revised scenarios on the effects on petrochemicals demand growth of all the megatrends – from complete success to extreme failure.

The developing world’s role in driving global demand for the building blocks has substantially increased over the last 20 years. In 2000, the Asia and Pacific region (which includes southeast Asia and the Indian subcontinent), Africa, the Middle East and South and Central America, accounted for 16% of global consumption. Last year, this had increased to 26%.

Just for demonstration purposes only as this doesn’t involve proper scenario work, let us consider two outcomes for 2021 demand for the building blocks based on different outcomes from the pandemic.

Let us start, though, with what happened in 2020 for the sake of valuable context. I am assuming 2% growth for North America over 2019, flat growth for Europe and 4% growth for northeast Asia (NEA), which comprises China, Japan, South Korea and Taiwan. Growth in the one remaining region, the Former Soviet Union (FSU), was 7%.

Growth was positive in the developed world because of unprecedented levels of government economic stimulus and the cycle out of some services into goods – e.g. greater demand for eating food from supermarkets as opposed to restaurants, increased hygiene needs and more demand for laptops and washing machines for converting homes into offices.

Meanwhile, though, much smaller government budgets, the collapse of remittance payments from overseas workers and domestic lockdowns that pushed hundreds of millions more people into extreme poverty led to negative growth across the developing world. I am assuming Asia and Pacific growth was minus 3% in 2020 over last year, Africa was minus 8%, the Middle East minus 5% and South and Central America minus 7%.

Let me again stress that these estimates are for demonstration purposes only. For proper scenario work, contact me at john.richardson@icis.com and I will put you in touch with our consulting and/or analytics teams.