THE LIKELIHOOD that 227,000 tonnes of China’s polyethylene (PE) and polypropylene (PP) coal-based capacity is forecast to be lost to plant shutdowns in September and October this year looks at first glance to be good news for exporters to China. This would be much higher than the 43,000 tonnes of total capacity lost during the same two months last year.

What might also on the surface cheer up the PE and PP exporters to China is the expectation that the start-up of new plants could be delayed during the rest of this year because of the same reason for the increased numbers of turnarounds: local authorities scrambling to hit CO2 emissions-reduction targets set by Beijing.

Surface reasoning misses the point that the increased emphasis on hitting the C02 targets, set under the 14th Five-Year-Plan (2021-2025), is connected to the central government’s crackdown on the real-estate sector.

The strongest evidence of this crackdown is that Beijing might be willing to let Evergrande, the heavily local property developer, fall into debt default.

The company could end up being converted into a state-owned enterprise with big investors forced to bear the bulk of losses, whereas small investors – buyers of single plots of land or apartments – are likely to be protected, I have been told.

We must get used to the idea that China is trying to build an entirely new economic growth model, one that is more sustainable in more than just one interpretation of the word.

And with this attempt comes huge risks for petrochemicals demand. So, even with a higher number of plant turnarounds in September and October and with perhaps some new PE and PP start-ups delayed, this does not necessarily mean a pick-up in imports during the remainder of this year and into 2022.

Why? Because Beijing looks as if it is prepared to tolerate a continued deceleration in economic growth over the next 6-18 months as it builds a new growth model, which could, as I discussed on Monday, unlock much stronger demand in China’s inland poorer provinces.

BUT for the next 6-18 months, be prepared for a lot of potential downward pressure on markets.

Focusing just on PP, using the latest available China Customs net import data along with our estimates of local production, the chart below shows a continued decline in demand. Demand has been weakening since February. This could get worse rather than better in the short-to medium-term. 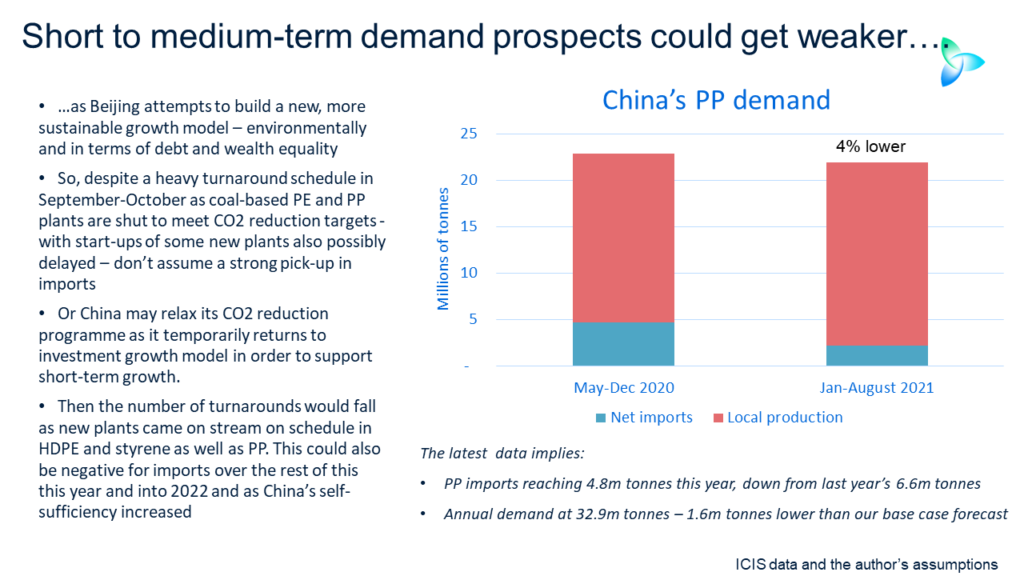 There is another outcome to consider: China relaxes pressure on industry in general to reduce C02 emissions as it temporarily returns to its investment-led growth model for the sake of shoring-up economic growth.

But this would mean fewer PP and other petrochemical turnarounds and new plants coming on-stream on schedule.

Therefore, even in a stronger demand environment, imports wouldn’t necessarily increase as China would resume its march towards much greater self-sufficiency in PP, high-density PE, styrene and other products.

China wants growth to be more sustainable by getting rid of the highly risky speculation that has got Evergrande and other property developers into trouble.

“Developers use borrowed money to acquire land, collect presale cash before projects even start and then borrow more to invest in further projects,” wrote Caixin.

In the build-up to the Global Financial Crisis, debt levels had built up dramatically in the US and many other European countries, said Ruchir Sharma, Morgan Stanley Investment Management’s chief global strategist in the Financial Times.

“Since then, China has led the debt binge: private debt held by households and corporations has risen by nearly 100 percentage points to 260 per cent of gross domestic product in China, accounting for nearly two-thirds of the global increase,” he added.

A lot of this debt increase is down to the real-estate sector. The air is now being released from the bubble, thanks to the government’s “three red lines” policy for real estate, introduced last year: liability-to-asset ratio (excluding advance receipts) of less than 70%, net gearing ratio of less than 100% and cash-to-short-term debt ratio of more than one.

Evergrande has so far not received a government bailout, likely because it has breached these red lines, I’ve been told.

Bloomberg made the point that no other emerging economy had debt levels relative to GDP comparable to China’s. Most of the developed countries had been reducing their debt levels before the pandemic struck, whereas China’s has accelerated up to and during the pandemic, the wire service added.

So now we have our first definition of what China’s new sustainability push means: reducing debt.

Narrowing the yawning gaps between the poorer rural provinces and the rich coastal provinces, and between the rich elite in general, is another definition of what sustainability means in China.

This is intrinsically tied into deflating the real estate bubble, which, along with threatening a systemic debt problem, has widened income inequality. As President Xi Jinping said in 2017, as he lay the groundwork for today’s “common prosperity” policy pivot, “houses are meant for living in and not speculation”.

The situation with energy and debt were oddly similar, added Bloomberg.

“Power rationing has spread across many of China’s economic powerhouse provinces as local governments risk missing targets for reducing the emissions intensity of their economies,” said the wire service.

For years, China’s electricity consumption had grown at a rate only just lower than the economy, threatening Xi’s ambitions to hit an emissions peak by 2030, added Bloomberg.

Here we therefore have our third definition of sustainability: reducing CO2 emissions.

Watch steel demand and production very closely as indicators of whether China is sticking to both debt reduction and carbon emissions targets, said Carbon Brief in this outstanding article:

As I said in my executive summary, it could be that the tensions between short- and long-term objectives become so great that China needs to temporarily relax controls over CO2 emissions and debt levels.

Carbon Brief added that during Q1 this year, emissions for the whole of 2021 were set to rise by 9% versus the pre-pandemic year of 2019. If this carried on, this would have left no space for further emissions growth in 2020-2025 if China was going to hit its 14th Five-Year Plan target.

Carbon Brief added in a report on the second quarter that China’s emissions growth had slowed down considerably.

But the tensions are clearly still there as despite big investments in renewable energy, China remains heavily dependent on coal and gas for power generation. The scale of the manufacturing and production cutbacks required to hit the CO2 targets might thus be so unfeasible that restrictions are relaxed.

Bloomberg said that Chinese economic growth had been largely driven by a 5% annual rise in electricity consumption.

If China were to keep growing electricity demand at 5% per annum without burning coal, it would need to be building around 100 gigawatts of solar and 50 gigawatts of wind power every year. The pace in capacity growth was closer to half this level, said Bloomberg.

Local governments remain under pressure to deliver economic growth targets set annually by Beijing, and a proven way to hit the targets would be to re-inflate the real estate bubble and let steel, petrochemicals and other manufacturing plants increase their output.

You therefore need our data on Chinese petrochemical plant operating rates, on new start-ups, on demand and on imports to build scenarios. A scenario-based approach is the only sensible approach. We can help you build these scenarios.