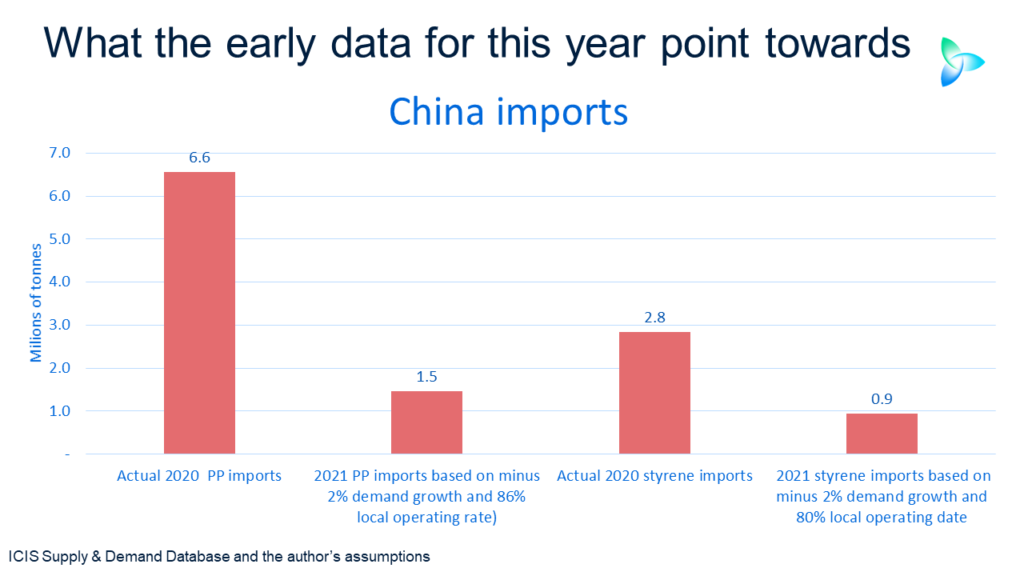 CHINA’S apparent demand for polyethylene, polypropylene (PP), styrene monomer (SM) and paraxylene  fell during the first two months of this year versus November-December 2020.

I have yet  to crunch the data on the rest of the major products, but I suspect the trend will be the same.

(This comparison is the only valid one because during January-February 2020, China was in the middle of the pandemic. This resulted in net imports and local production collapsing – what makes up apparent demand. All statistical year-on-year comparisons up until May will be highly misleading. China’s economy rebounded from May onwards).

In every year between 2009 and 2019, January-February petrochemicals demand improved over the end of the previous year because of the build-up of stocks before the Lunar Year Holidays.

This build-up was so finished goods could be manufactured for the holidays – one of China’s biggest consumption seasons.

The Chinese government also normally boosts the availability of new lending during January and February, leading to a pick-up in economic activity

This year was no exception. January 2021 lending hit a record high, and the decline in February lending was less than expected.

Why was apparent demand lower in January-February 2021? It important to note that the declines were usually the result of sharp falls in net imports.

One explanation is better netbacks in Europe, Latin America and Turkey. This could attracted petrochemicals cargoes to these three other regions which would have normally gone to China.

The diversion of cargoes could be the result of exceptional tight supply in Europe, Latin America and Turkey during the 11-17 January Lunar New Year Holiday period.

As overseas pricing surged on the tight supply – and  on higher oil prices, Chinese pricing was flat because its markets were shut down during the holidays.

But why have China netbacks remained much, much lower than in other regions since the end of the holidays? Something else is happening.

I believe there are two reasons for the falls in petrochemicals demand, which I have been flagging up as risks since January this year. Now we have some data to back up my warnings.

The two reasons are as follows:

In my view it stands to reason that there will have been a moderate slowdown in export growth versus late 2020 because of the global container-freight and semiconductor shortages.

The semiconductor shortage has worsened over the last two weeks as consumer electronics production Is now being affected along with autos production.

Whether the slowdown in Chinese export growth continues for the rest of this year very much remains to be seen, of course.

We are equally in the dark about whether China’s local economy will fully make up the ground it lost in 2020.

As I’ve discussed before, a scenario-based approach is the only solution for your business because of today’s exceptional global complexity and ambiguity.

The scenarios will be very difficult to build and keep up to date because of the scale of the complexity and ambiguity.  But it is work that must done.

Early data point to a collapse in PP and SM imports

This was party because PP exports hit a record-high in January-February because of the big jump in local capacity and better overseas netbacks.

But it is also important note that China’s PP imports also fell sharply; they were down by 28% to 1m tonnes.

Local production rose by 2% to 4.8m tonnes, resulting in a 2% decline in apparent demand to 5.5m tonnes.

It may be nowhere as bad this. We could instead see another boom year for Chinese imports.

But, as I said earlier, hoping for the best without adequate scenario planning is hardly the right strategy in today’s environment.

And because of China’s big push towards complete PP and SM self-sufficiency, a collapse in imports on this scale is only a question of time.