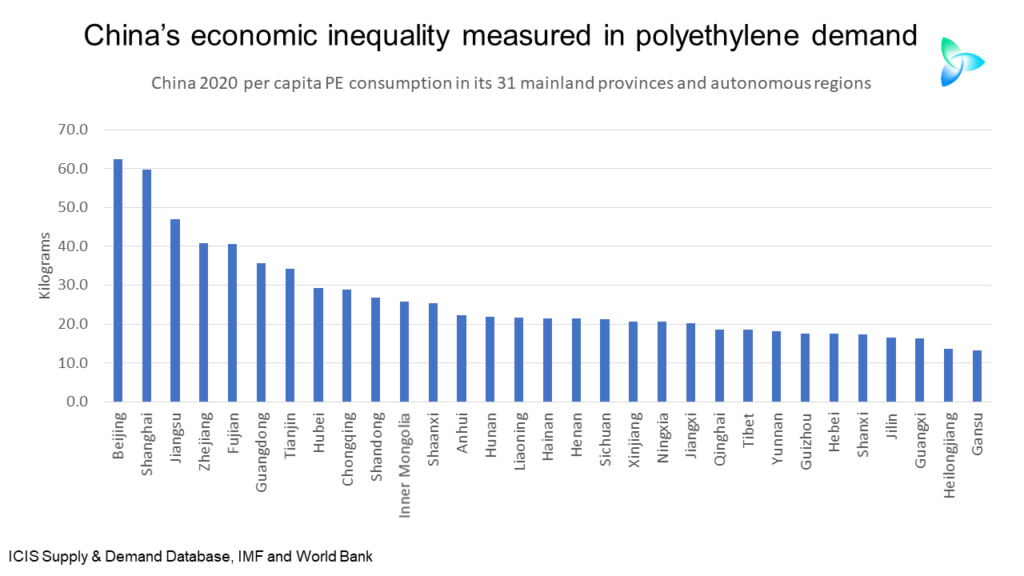 THIS COULD be the biggest event in our industry since at least the Global Financial Crisis, possibly even earlier. Do not make the mistake of underestimating the importance of China’s policy shift to “common prosperity” in your planning process.

I’ve already covered some of the short-term potential implications in my posts on Monday and Wednesday last week where I focused on the implications of a potential deft default of Evergrande. The events at Evergrande are a symptom of “common prosperity”.

On Friday, I began to explore the longer-term by imagining a petrochemicals demand world without the post-2008 China property bubble, using methylene diphenyl diisocyanate (MDI) and toluene diisocyanate (TDI). These are two of the raw materials used to make polyurethanes.

Every long-term petrochemical demand growth forecast must be redrawn in the light of “common prosperity”. I suggest three headline scenarios as a starting point with lots of grey areas in between:

The risks of “common prosperity” failing

I don’t believe Scenario 3 will happen because of China’s tremendous track record in getting economic policies right.

But you would be wrong not to prepare for the risks. Using this excellent article from The Diplomat as an example, China’s challenges include a root-and-branch reform of a tax system which the magazine sees as unlikely given the current political system.

“Tax rates are high, but the number of people paying taxes was small and compliance is inadequate. As a result, fiscal policy has played only a limited role in ‘moderating income inequality in China to date’, wrote The Diplomat.

“China’s real per capita GDP is predicted to increase from $10,687 in 2020 to $23,000 in 2035. In such a span of development, according to cross-national data, the average proportion of government expenditure to GDP increases from 26% to 36%,” wrote Cai Fang in an East Asia Forum article.

This highlights the scale of the task China faces if it wants to raise tax revenues by enough to achieve its ambition of being a much more developed economy.

And as the details of Scenario 3 indicate, vested interests could get in the way of essential tax reforms.

The Diplomat article said that 89% of total government spending was by China’s local governments. This left little appetite at the provincial level for property taxes, viewed as essential for closing the tax-revenue gap. Two cities in China, Shanghai and Chongqing, have been trialling property taxes.

The local authorities’ heavy dependence on land sales suggests that they might fight to perpetuate the “three carriages” of the real-estate sector that Caixin warned had led to an unsustainable property bubble – high turnover, high gross profit and high leverage.

“Developers use borrowed money to acquire land, collect presale cash before projects even start and then borrow more to invest in further projects,” said Caixin.

This leads us into the potential grey areas between my three headline scenarios. Scenario 1 might continue to happen for a while, creating an even bigger real-estate debt problem.

The central government might then temporarily bring the provinces into line, only for “common prosperity” to fail because of constant resistance from all the vested interests.

Kevin Rudd, a former Australian prime minister, warned that Chinese consumer demand would face the persistent problem of high unemployment, made worse by China’s clampdown on the private sector.

“[President Xi Jinping] has also focused on state-led innovation through initiatives like the ‘Made in China 2025’ policy,” wrote Rudd in an article for the Asia Policy Institute.

He added that productivity growth was China’s biggest challenge. Since 2008, China’s total factor productivity (TFP) had grown by just 1.1% annually, less than a third the rate of the previous three decades, said Rudd, citing the World Bank.

“During the 2009-2018 period following the global financial crisis, aggregate labour productivity in China weakened to 7.4% per year, down from 9% percent in the 1999-2008 period before the crisis,” he said.

“Moreover, of all the sectors that have experienced slowdowns in the past few years, it has been the services sector — precisely the sector Xi is counting on powering the economy — that has been hit the hardest,” he added.

Amid all the fanfare about China’s booming economy, it is easy to forget that it is still only around 30% as productive as the US, Japanese and German economies.

Rudd’s solution? Another root-and-branch reform, this time of the state-owned enterprises. But he detected insufficient political will to bring this about.

Then there is the 10,000lb gorilla sitting not so quietly in the corner of the room, which is China’s rapidly greying population and its negative effect on demand.

The greying of the population is one of the reasons why China might greatly improve its tax base in order to meet rising healthcare and pension costs.

Narrowing the rural-urban income divide may also prove to be extremely difficult, as the rural-urban inland provinces are ageing more rapidly than those on the coast because of the large migration of young people in search of work.

Narrowing the rural-urban income divide is a key part of “common prosperity”, as it is seen as vital for reducing social tensions.

In 1997, the ratio of rural to urban household income was 1.833 and the Gini coefficient of nationwide income distribution was 0.398, wrote Cai Fang in the East Asia Forum article referred to above. 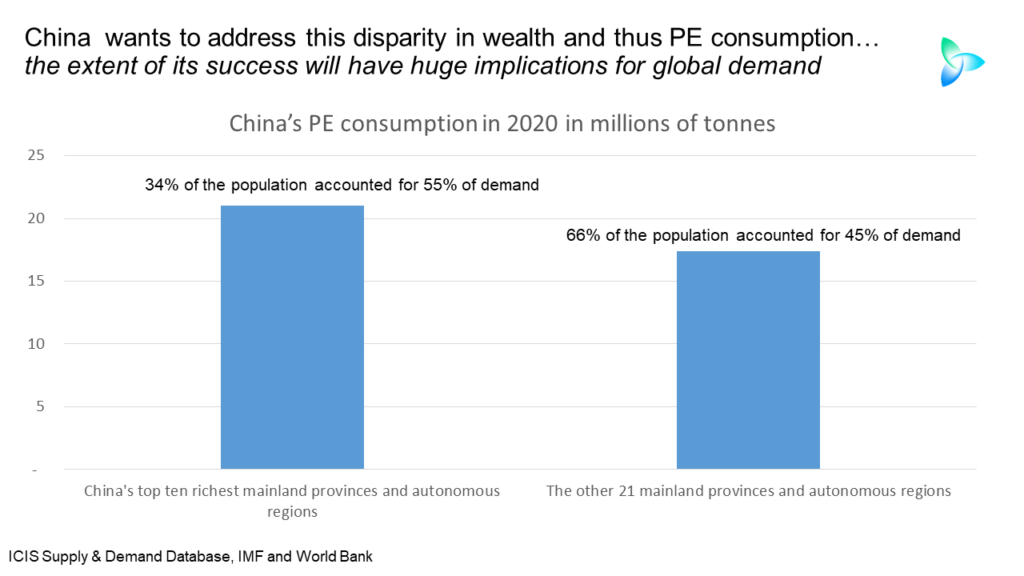 Hopefully, you are now convinced that you need to redraw all your global petrochemicals demand forecasts.

I also hope that you heed my longstanding advice and treat China as four separate economic regions.

Assessing growth across these four regions will help you determine Beijing’s levels of success in reducing the urban-rural income divide. This will also point towards progress on raising the tax base, as the poorer regions of China will only be able to substantially close the income and wealth gap through much greater state support.

As a reminder, the four economic regions are: the richer southern and eastern coastal economies where petrochemicals demand is close to that of a developed economy; the north-eastern provinces, China’s rustbelt, which faces the challenges of old heavy industries that are being restructured; the up-and-coming booming inland provinces adjacent to the wealthy coastal provinces; and the poorer far western provinces.

The great thing about the ICIS petrochemicals data is that it can give you an idea of the current split of province-by-province demand with the support of population and per capita income data from the World Bank and the IMF. This data can then be subdivided into the four economic regions mentioned above.

So, look at the chart at the beginning of this blog post which shows per capita polyethylene (PE) consumption across the 31 mainland provinces and autonomous regions in 2020.

Also consider the chart at the beginning of this section. Here, I have translated the per capita PE consumption numbers into tonnes of demand.

As you can see, just 34% of the population in the ten richest provinces accounted for 55% of PE demand in 2020.

The remaining 66% of the population in the other 21 provinces consumed 45% of the total. As petrochemicals are a strong measure of income and wealth, this divide indicates the scale of the challenges facing Beijing.

We are here to help with this type of data crunching and analysis. We can help you build and rebuild the scenarios that will enable to you to prosper in what may or may not be an entirely remade Chinese economy. For more information on our services, contact john.richardson@icis.com.