THE COMING COLLAPSE of China, as I’ve discussed is before, is like commercially viable nuclear fusion and peak oil – perpetually 10 years away.

But what seems evident to me is that over the next six to 18 months, as China transitions to what I believe will be a successful new and much more sustainable economic growth model, we are going to see a great deal of petrochemicals market volatility. This could be a great time for traders as sentiment swings from the negative to the positive and back again.

Underlying all of this, though, are lower growth prospects at least in the short term. I see China sticking to its real estate deleveraging guns over the next six to 18 months as it takes further air out of the real estate bubble.

Given that the property sector accounts for an astonishingly high 29% of Chinese GDP, the highest percentage in global economic history, this is bound to have a deflationary short-term effect on demand for finished goods and services directly and indirectly linked to real estate.

This will have a direct negative impact on the petrochemicals and polymers that go into construction as real estate building continues to decline. We must also consider the indirect impact on consumer sentiment and therefore spending if land sales keep on falling and property prices continue to edge down in China’s major cities.

Let me stress again: this is not the end of the world! Far from it. Chinese petrochemicals demand, after what could be a negative year of growth for some products in 2021, will still I believe grow over the next few years. But we must be realistic in expecting lower rates of growth than had been previously expected.

Now, as usual, let me provide you with a guide on what I believe this will mean for one petrochemical – high-density polyethylene (HDPE) – during the remainder of this year and in 2022. In later posts, I will work my way through some of the other products starting with the other two grades PE – low-density PE  and linear low-density.

A perfect storm: weaker Chinese and SEA demand along with increased supply

The chart below is a pointer to why the petrochemicals world in general remains as divided today as it has been since around April this year. 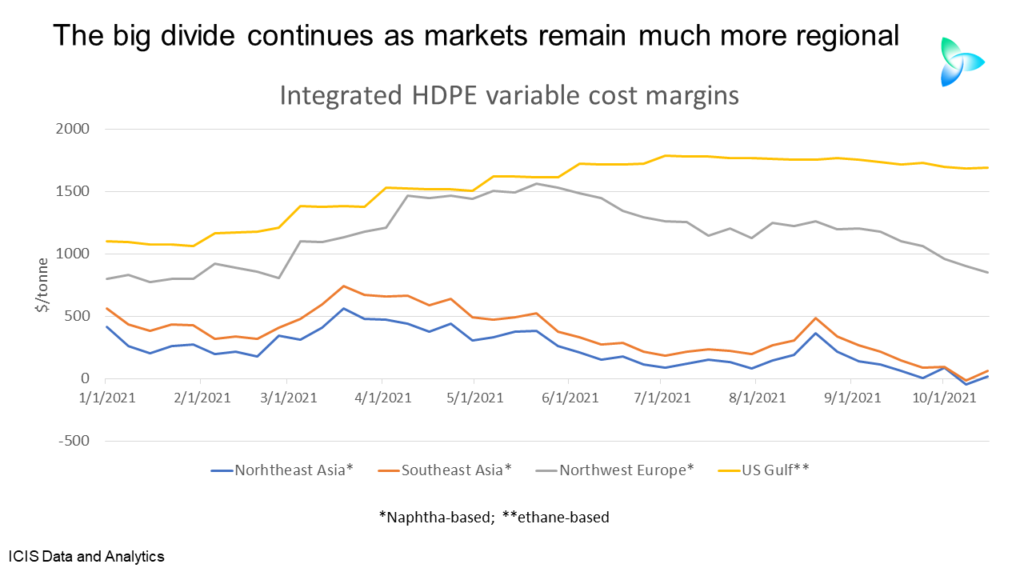 During the first week of October, northeast (NEA) and southeast Asia (SEA) margins edged into negative territory for the first time since November 2019. Meanwhile, US and European margins remained close to record highs, although European margins have fallen recently on higher naphtha feedstock costs.

The wider gap in margins from April onwards has been the result of high container freight rates restricting Asia’s ability to export its oversupply to other regions.

Long supply in Asia is the result of what ICIS expects will be a 12% rise in China’s HDPE production in 2021 to around 28m tonnes. China’s production is forecast to increase by a further 13% next year.

Another factor behind the Asian supply length is weaker-than-expected demand in China. China’s demand weakness, relative to a freakishly strong H2 2020, became apparent from February this year.

This weakness seems to have initially been the result of high container freight costs and shortages of containers damaging Chinese exports of finished goods. While 2021 exports have risen in value terms, in volume terms they declined in H1 this year.

Since August, when Beijing put its foot down on the “common prosperity” policy pivot, demand weakness has increased.

Our analysis shows that in NEA in 2020, 15% of HDPE demand comprised pipes and conduits. These are the end-use sectors directly affected by the real estate construction slowdown. Government spending on infrastructure has also slowed down in 2021 following a pandemic-induced acceleration of projects in 2020.

Retail sales growth has been disappointing so far in 2021, although there was a slight improvement in September. Some 70% of NEA 2020 HDPE demand consisted of the packaging, films, sheets and blow and injection-moulding end-use markets, we estimate. These sectors are of course largely driven by retail sales.

A further negative influence on China’s HDPE demand is more restricted use of single-use plastics in the bigger cities. These measures were first announced in February 2020, were placed on the backburner because of the pandemic, but are now being more rigorously enforced.

Our latest estimate for Chinese HDPE demand is for January-August 2021. If you annualise this number (divide by eight and multiply by 12), this results in demand for the full-year 2021 of around 16m tonnes. This would be 7% lower than the boom year of 2020 – but would still be 4% higher than in 2019.

The chart below illustrates these numbers and my guesstimate for what growth could be in 2021 – a return to positive growth of 4% over this year. But this would be short of the close-to-double-digit- growth that some people are expecting for next year. 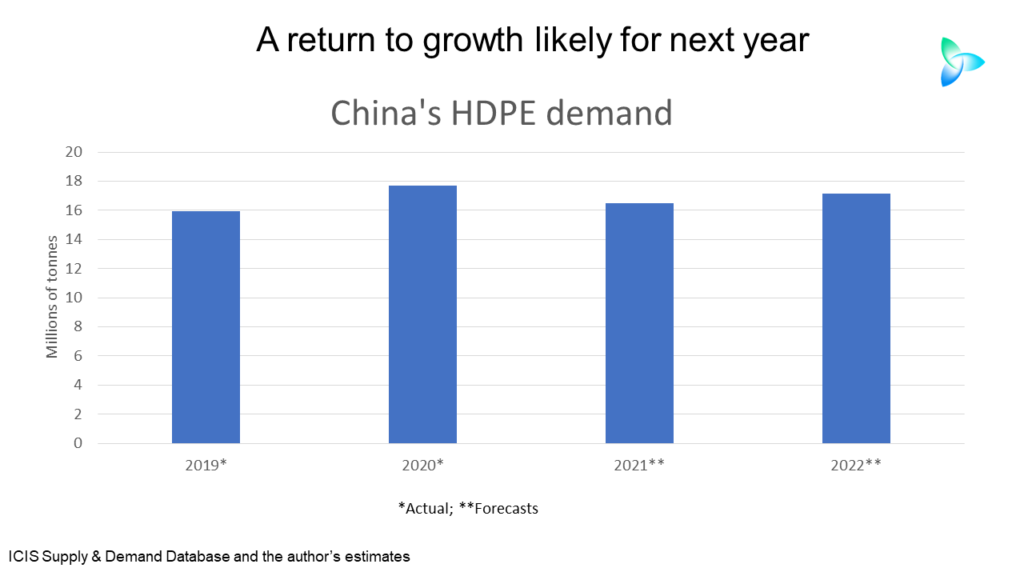 Back to the subject of China’s HDPE supply. Operating rates at coal-based plants have recently been reduced because of the country’s coal shortages. Coal-based HDPE comprises around 30% of total Chinese production.

Here’s the thing, though: the shortages of energy in general, which could last into next year, are forcing downstream factories to also shut down. Demand is therefore being adversely affected, so don’t expect HDPE markets to tighten because of the lack of sufficient coal.

SEA consumption in 2020 fell to 3.4m tonnes from 3.6m tonnes in 2019 due to the pandemic, a decline of 4%. Our forecast in January this year had been for SEA consumption to see 7% growth in 2021. But this seems unlikely because of low vaccination rates and continued lockdowns.

The chart below indicates another 4% decline in SEA this year followed by a 7% rebound in consumption in 2022 as vaccination rates rise and lockdowns ease. 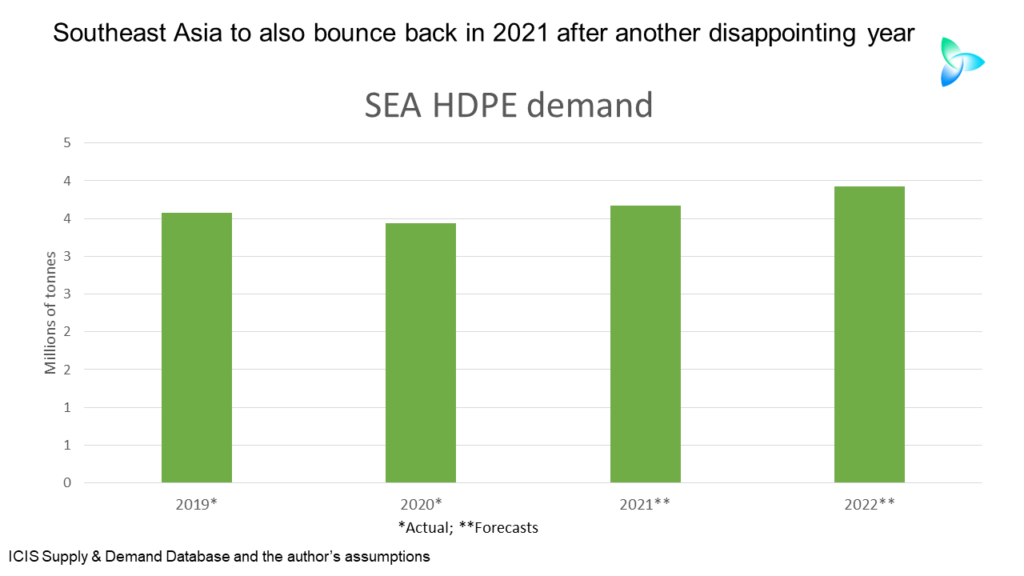 Rich world polymers consumption in general remains stronger than before the pandemic because of high levels of government stimulus and successful vaccination programmes that have allowed economies to re-open.

This contrasts with all the developing economies in SEA which lack access to cheap lending to raise spending to Western levels. The International Energy Agency estimates that financing in the developing world in general is seven times more expensive than in the developed world.

Some of the poorer countries in SEA also lack sufficient infrastructure and access to vaccines. This has led to very slow increases in full vaccination rates.

And, of course, there is the disappointing growth in China. As I said, this was firstly the result of a slowdown in exports and more recently “common prosperity”.

Fit this together and the margin chart at the start of this section of the post makes a lot of sense, as does the chart below showing the dramatic divergence in HDPE pricing between the different regions. The price differentials are obviously one of the reasons why profitability has fallen in Asia as it has increased in the US and Europe. 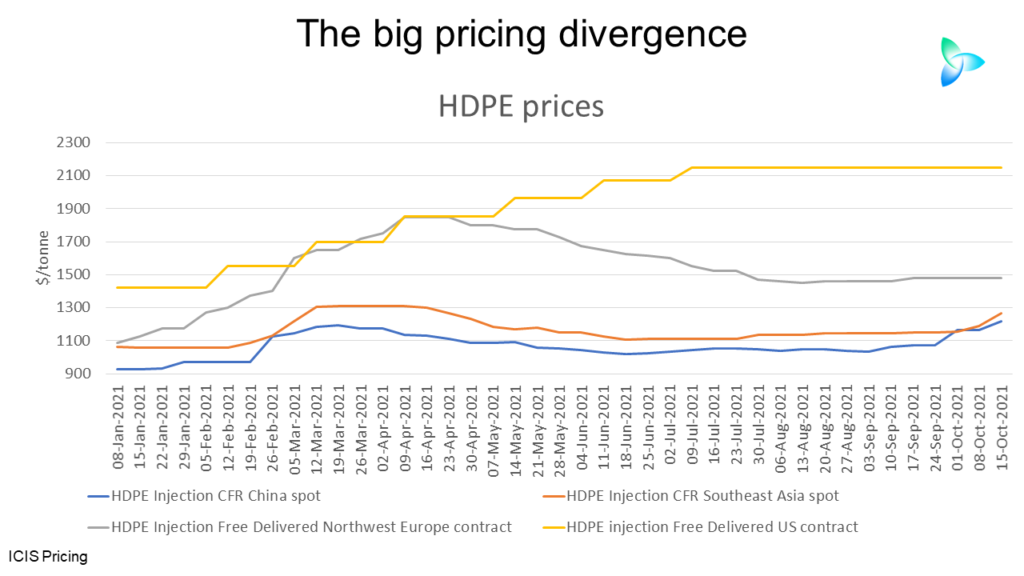 Before I move onto the conclusion, I am going to cheat here and insert a random but very important comment as I couldn’t fit the comment anywhere else: be aware of US HDPE production increasing in Q4 and into early 2022, leading to a sharp rise in exports.

The exports would, as always, be mainly targeted at Europe and Latin America – the main US export markets. But further downward pressure could also be exerted on Asia as the US also targets this region. US inventories are reported to be filling up as existing plants raise their operating rates and new capacity comes online.

Onto the conclusion. As I keep stressing this is not the end of the world. Look on the bright side. China’s demand growth will, I believe, still be positive next year as SEA growth also moves back into the black.

But your key takeaway is this: “common prosperity” is not going away. Get used to it. It is a complete game changer.