Women in the US labour market 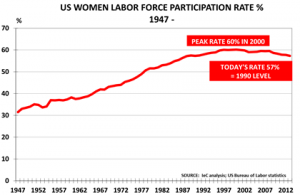 Working women supercharged western economic growth from the 1980s, as they created the phenomenon of dual-income households for the first time in history. But today, this trend is reversing as women’s participation rates decline and their earnings plateau relative to men.

This major change risks undermining a key part of the US Federal Reserve’s strategy, which assumes that reducing the US unemployment rate to 6.5 per cent will help restore economic growth.

The chart above shows the reversal now underway. Increasing numbers of women joined the workforce from 1947, doubling women’s participation rate from 32 per cent to a peak of 60 per cent in 2000 as the idea of women working outside the home became normal rather than unusual.  But the participation rate is now falling, and already back at 1990’s level of 57 per cent.

Alongside participation levels, spending power is important. After the 1963 Equal Pay Act, women’s earnings rose to 62 per cent of men’s by 1979, and to 81 per cent in 2005. Since then, however, the gap has flat-lined as the second chart shows. 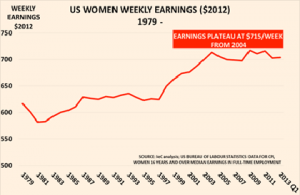 Household spending is 71 per cent of US GDP. So the arrival of more, and increasingly higher-paid, women in the workforce made a major difference to economic growth. As a 2005 National Bureau of Economic Research study noted they were no longer “perceived as secondary earners within the family”, particularly as more and more women chose to return to work after having children.

But have these trends run their course?  These changes coincide with a major generational shift. Boomer women are now leaving their high-spending years as they reach the 55-plus age bracket. At this age, people already own most of what they need and so consumption becomes more replacement-based. Additionally, 5,000 US women per day are now reaching the age of 65, and moving into retirement.

Women represent half of the US population, and if these major shifts in employment patterns continue policy makers will need to look beyond the 6.5 per cent target.