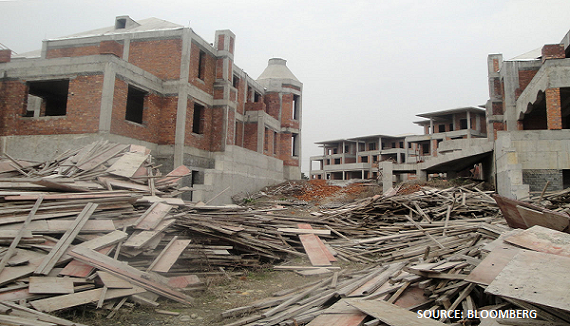 The sight above may become more familiar as China’s new leadership seek to burst the property bubble.  It shows unfinished town houses on the Peach Blossom Palace estate in Fenghua city, south of Shanghai.

They were built by local developer ‘Cement Shen’, whose Zhejiang Xingrun (ZX) property company went bust last month, owing Rmb3.5bn ($563m).  It seems likely this was the ‘Bear Stearns’ moment for China’s property sector, named after the US investment bank whose March 2008 bankruptcy signalled the start of the US sub-prime crisis.

A detailed report in Bloomberg suggests there are 90,000 ‘small developers’ in China like Cement Shen who could now be at risk.  As ZX’s owner, Shen Caixing was a pillar of the local community and chairman of the local Real Estate Association.  His 14-year property career summarises all that has been wrong with China’s development during its ‘lost decade’ under the previous leadership:

The key issue is the high level of property prices.  Bloomberg report it would now take 145 years for the average Fenghua resident to afford the cheapest home on the development.  Average disposable incomes in the city were RMB 39, 414 last year ($6341).  Yet the cheapest ZX home cost Rmb 5.7m for a 285 square metre apartment (3077 sq ft).  Rmb 25m was needed to buy the top-of-the-range 500 sq m homes.

As the blog wrote over 2 years ago:

“The problem is our old friend, unrealistic expectations.  The Financial Times notes: “It is easy to forget that the market is just over a decade old and, apart from a brief dip in the midst of the 2008 financial crisis when transactions dried up, most Chinese have only seen prices double every couple of years and never seen them fall.”

Just as in the US pre-2008, people came to believe prices could never fall.  And the problem was compounded by China’s lack of a proper social welfare system, which meant 70% of young women think that “housing, a stable income and some savings” are essential for any man wanting to get married.

For 15 years, this combination has led house prices to power ahead.  Local developers such as Cement Shen could easily obtain land from their friends in local government, who in turn depended on property development for up to 40% of their tax revenues.

Even worse, at least 60% of all companies listed on the A-share market have invested in real estate development during the past decade.  And all the banks depend on housing mortgages as a main source of revenue.

Of course, the speculative bubble led to millions of empty apartments.  There were 64.5m of these as early as 2010, as their owners believed that capital growth, not rental income, was the key to success.  One can now see the same phenomenon in many Western cities, where the lights never go on at night in many Chinese-owned luxury homes.

The reason is that the previous leadership’s aim of creating a ‘wealth effect’ to boost consumption via lending bubbles.  This allowed people in cities like Fenghua to buy homes at prices which they can never afford to repay.

The blog fears that Cement Shen’s bankruptcy is only the first of many, and that the fall-out from this speculative mania will not be confined just to China. And its view seems to be shared by China’s new leadership.  As state-owned China Daily commented, under the headline ‘No pain, no gain for China’s reformers’:

“Yes, there will be defaults by funds tied to unfinished property projects. There will be bankruptcies of companies burdened with excess capacity. There will be banks with ugly balance sheets – and runs on small financial institutions.  Some cities, and some industries, will have to endure almost as much distress as they would under shock therapy.

“Whatever stimulus might be introduced must be a strictly central government program, targeting select industries and locations.  It must facilitate, rather than to run counter to, the goals of reform.

“In the meantime, most or all companies that still operate in the old industrial economy and pursue obsolete development strategies will face a long, painful path to reform.”