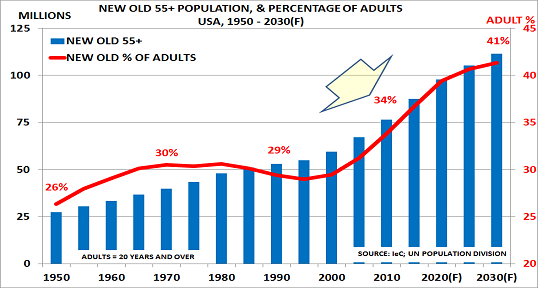 The BabyBoomer-led Supercycle of economic growth meant the US suffered just 17 months of recession between 1983-2007.  Now populations are ageing, and there is boundless evidence to prove that older people have lower incomes, and also spend less as they already have most of what they need.

As a result, historians will likely be amazed when they find today’s policymakers ignore this data, and assert that old age only matters for the economy in terms of higher costs for health and social security.  But this will be too late for the millions of ordinary people who are suffering the consequences of their major error.

The chart highlights the scale of the challenge ahead.  It shows the number of US adults in the New Old 55+ generation between 1950 – 2030 (blue column), and their percentage of the adult population aged >20 years (red line):

A detailed study in the New York Times (NYT) highlights the implications.  It warns that even at top income levels, 72% of couples with a $1m retirement fund will likely run out of cash before they both die:

“A typical 65-year-old couple with $1 million in tax-free municipal bonds want to retire. They plan to withdraw 4 percent of their savings a year — a common, rule-of-thumb drawdown. But under current conditions, if they spend that $40,000 a year, adjusted for inflation, there is a 72 percent probability that they will run through their bond portfolio before they die.”

Even worse, of course, is that most people will not have a $1m fund. A follow-up NYT study notes the median financial net worth of US households headed by someone aged 55-64 is just $61k.

Equally worrying is that that the costs of Social Security and Medicare are already 37% of all Federal spending, and will be 42% by 2023.  Whilst latest forecasts suggest Medicare will run out by 2026, and Social Security by 2033.