Sinopec adapts to the New Normal 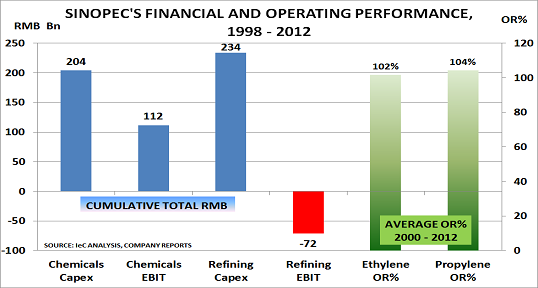 The 2013 edition of the blog’s study on Sinopec* is now available, and highlights the changes that are taking place in Sinopec’s focus as the world transitions to the New Normal.

Sinopec is China’s leading refining and chemical company, and its original role after 2000 was to support China’s emergence as the manufacturing capital of the world.  Today, however, China’s exports are falling rapidly as the West’s economy flatlines with the ageing of the BabyBoomers.

One thing that will not change is Sinopec’s policy of continued investment, without looking for commercial returns.  As the chart shows, since 1998:

Thus as the world transitions to the New Normal, Sinopec’s new role will be to support the growth of China’s domestic demand. This will have considerable implications for the global petchem industry:

The blog highlighted this potential in the first edition of the Study in 2011. Now it is becoming reality  But unfortunately very few companies have yet begun to appreciate the dramatic changes that will result. They now need to catch up very quickly.