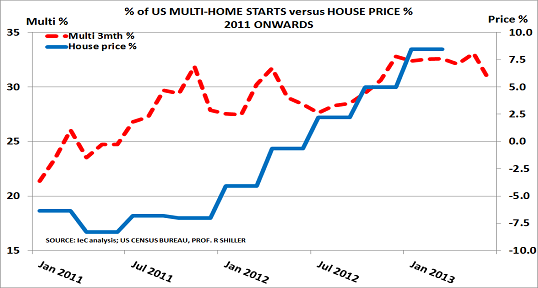 US housing is core to the US economy.  And as the US economy is 22% of the global economy, developments in housing matter to all of us.

We learnt this during the subprime Crisis, when the blog’s warnings that the supposed boom was an illusion were ignored until too late.  Now the same problem is developing again.  Thus the US Federal Reserve chairman told Congress last week that a “strong housing market” will be a key engine of economic recovery.

But there is no evidence to support his view.  Instead as the leading expert on the housing market, Prof Robert Shiller, warned back in February:

“We’re beginning to hear noises that we’ve reached a major turning point in the housing market — and that, with interest rates so low, this is a rare opportunity to buy. But are such observations on target?  It would be comforting if they were. Yet the unfortunate truth is that the tea leaves don’t clearly suggest any particular path for prices, either up or down.”

Shiller added that “any short-run increase in inflation-adjusted home prices has been virtually worthless as an indicator of where home prices will be going over the next five or more years“.  Whilst on the negative side, he cited the falling rate of home-ownership (down from 69% in 2006 to 65.5% in 2012) as evidence of a secular change in attitudes to home buying.

The chart above confirms Shiller’s point.  It shows the unusual link that has developed between the rise in rental apartment building and overall house prices, as measured by the S&P Case-Shiller Index:

Builders have responded to this interest, pushing the volume of multi-family starts to a near record 33%.  And the arrival of these cash-based investors has helped push house prices higher overall (blue line).  But this is likely to be just a temporary phenomenon, just as Shiller forecast.

Thus all 83 economists surveyed by Bloomberg were far too optimistic in their forecasts for US housing starts in June.  The median was for a rise to 960k starts, with the range between 915k – 1.03m.  In fact, starts fell to just 836k.  Single family home starts were just 591k, back at Q4 levels.

PVC demand confirms the picture of a slowing market.  Operating rates for chloralkali production (PVC is the main use for chlorine) dropped by 4 percentage points in May to 83%, whilst ICIS reported that “US PVC demand, the main end-product in the chlorvinyls chain, has tapered off somewhat“.

Even more important is that the recent rise in interest rates has taken them back to 2011 levels.  This not only impacts potential home buyers, but also reduces refinancings of existing mortgages.

The problem remains that the Fed is following the wrong policy.  It is trying to restore house prices to bubble levels.  Not only is this likely to be impossible given current trends in home ownership.  But it also ignores the obvious fact that the Fed’s attempt since 2009 to recreate asset bubbles in housing and stock markets has still not led to sustainable economic recovery.