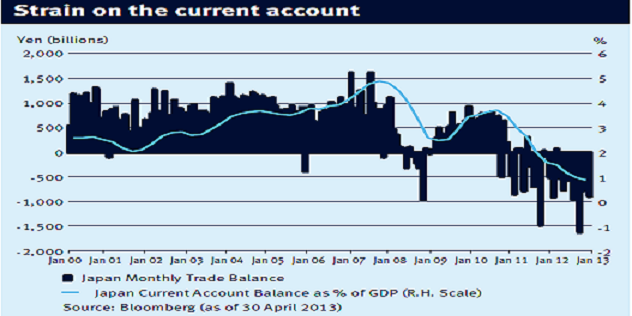 Gradually the world’s major investors are recognising that demographics are a key driver for the global economy.  They are also becoming more doubtful about the ability of governments and central banks to overcome the challenges of ageing populations.

Standard Life, with assets of $275bn, have thus issued a new report which focuses on exactly these issues in relation to Japan.  They ask:

This new interest is, of course, very encouraging.  The more these critical issues are debated, the more insight can be gained about the policies best designed to move us forward.  At the moment, policymakers and investors are mainly looking in the rear-view mirror, hoping to somehow return to the boom days of the 1983-2007 SuperCycle.

Japan is the classic example of how current well-intentioned, but fundamentally misguided policies can end up hurting the patient rather than curing them.  As Standard Life’s chart shows, Japan’s likely move into current account deficit (blue line) has come much earlier than the experts forecast.  This matters, because it means Japan will soon need support from overseas investors to meet its spending commitments and pension needs.

The current account is now just 1% of GDP, whilst the trade balance (blue column) has already gone negative.  This is the basis for premier Abe’s new policy of trying to stimulate exports by devaluing the yen.  But it solves only one of the two problems and makes the other worse:

Driving with a view of the rear-view mirror will not solve today’s problems.  As we argue in chapter 12 of Boom, Gloom and the New Normal, the world urgently needs leaders with vision, who are prepared to look for new solutions as we transition to the New Normal.