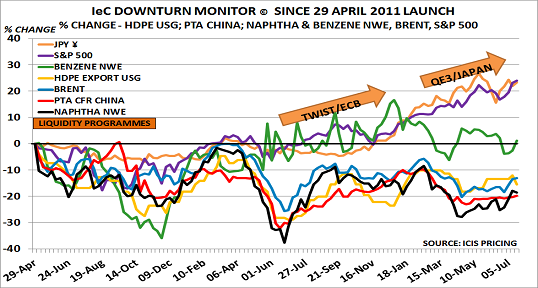 Just as the blog feared, H2 seems to have started badly in terms of demand, and seems likely to get worse.  Thus Celanese CEO, Mark Rohr, told investors that in China, “Much of the industrial chemical market there is in turmoil because demand has just not grown.”

“The economic environment remains challenging and AkzoNobel does not expect an early improvement in the trends faced in its end-user market segment…a general softening in demand was evident, notably in Europe, although manufacturing also slowed down in China and other high growth markets, impacting global supply chains and adding to the volatility in ordering patterns.”

Equally, in an echo of the blog’s own recent headline, a major butadiene producer (used for car tyres) told ICIS news “The scariest thing of all is not knowing how deep the hole is.”   Whilst another said “We are worried and don’t think this is just a short-term story.”

In China, it seems more and more likely that the new leadership is indeed repeating the 1993 playbook of President Jiang Zemin and economics minister Zhu Rongji.  They recognise they have to reverse the failed policies of the previous leadership, whilst tackling corruption.  If so, this will likely mean negative growth for a while, and a house price crash, as the blog has warned previously.

But Western policymakers are still heading in the wrong direction, failing to understand that ageing societies will have low economic growth.  And their policies are now throwing up more and more perverse outcomes:

The chart shows latest benchmark price movements since the IeC Downturn Monitor launch on 29 April 2011, with ICIS pricing comments below:

PTA China, red, down 20%. “Polyester producers continued to prioritise selling cargoes to prevent inventory build-ups, rather than raising prices to keep their margins”
Naphtha Europe, black, down 19%. “July domestic petrochemical demand has dried up, while the arbitrage window to Asia is closed.”
Brent crude oil, blue, down 13%.
HDPE USA export, yellow, down 16%. “Trades slowed because many plastic processors are not interested in restocking  at current prices.”
Benzene Europe, green, down 6%. ”Austerity measures being pursued by governments across Europe have brought new projects to a halt.”
US$: yen, orange, up 23%
S&P 500 stock market index, purple, up 24%