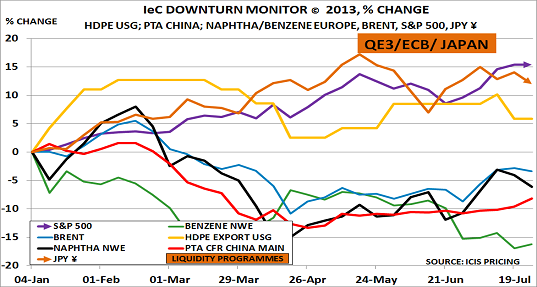 In early March, the blog described itself as feeling like “a lonely voice, focused on what is really happening in the real world”.   But gradually since then, the consensus view on growth and commodities regulation has begun to shift in its direction.  For example, a recent New York Times article on China by Nobel Prize-winner Paul Krugman could have been based on recent blog posts:

Equally, former US economic chief Larry Summers has now followed the blog in suggesting that “Quantitative Easing (QE) in my view is less efficacious for the real economy than most people suppose”.

Even more encouraging is that regulators are finally waking up to the fact that commodity markets have completely lost their role of price discovery, due to the combination of central bank liquidity and investment bank speculation.  As the New York Times reported:

“In 2011, for instance, an internal Goldman memo suggested that speculation by investors accounted for about a third of the price of a barrel of oil.”

Whilst the aluminium warehousing scandal has finally reached the US Senate Banking Committee.  Evidence from MillerCoors suggested this cost consumers $3bn last year, whilst Bloomberg reported “the 10 largest Wall Street banks generated about $6bn in revenue from commodities in 2012.”

Friday’s news that JP Morgan will exit its physical commodity business is thus an important step in the right direction.  It will hopefully soon be followed by the other major players.

But policymakers have still not yet taken the critical step, which is to ask why their policies have failed so badly?  They cannot yet bring themselves to recognise the simple truth that demographics drive demand.  They still want to claim credit for the 1983-2007 economic SuperCycle, rather than accepting it was mainly due to the vastly increased numbers of Western BabyBoomers arriving in the 25 – 54 Wealth Creating age group.

Lower growth is now inevitable in the West as a result of these ageing Boomers reaching their low-spending and low income years.  Whilst China’s one child policy since 1978 means its growth is also slowing, as its population ages.

The result, as the blog will discuss in a special series this week, is that companies have heavily over-invested in major new capacity, on the assumption that SuperCycle growth would continue.  Now, disappointment is looming.  Thus BASF CEO Kurt Bock warned on Thursday:

“We expect the development of the second half to be rather flat compared to the first half of 2013.  Achieving our earnings target is significantly more challenging today than we had expected at the beginning of the year”.

Whilst Dow CEO Andrew Liveris warned that “while growth continues in China, we all have to reset expectations below historical rates.”

The chart shows latest benchmark price movements since January with ICIS pricing comments below:
Benzene Europe, green, down 16%. ”While prices have been on a steady downward trend since the start of 2013, they are still historically and structurally high compared with oil and energy pricing, thus making them difficult for end-use markets to absorb.”
PTA China, red, down 8%. “Restocking activity from textile factories worried that polyester prices will increase further on the back of higher raw material prices”
Naphtha Europe, black, down 6%. “Europe is structurally long, and sellers need to export to US gasoline and Asian petrochemical sectors to keep stocks in balance”
Brent crude oil, blue, down 3%.
HDPE USA export, yellow, up 6%. “Export prices were generally stable.”
US$: yen, orange, up 12%
S&P 500 stock market index, purple, up 15%