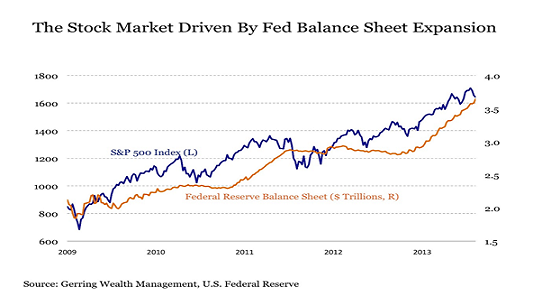 After 5 years of government stimulus, policymakers are having to think about their exit plans.  US Federal Reserve chairman Ben Bernanke retires in January, and most of the blog’s clients in the financial community believe that he intends to start the process before he leaves, perhaps as early as next month.

This is likely to prove very scary for those markets that have boomed due to the liquidity bubble of the past 4 years.  After all, when stimulus first started back in April 2009, not a single policymaker ever imagined that central banks would still be printing money today to try and support the economy.  In September 2009, the G20 meeting of the world’s richest countries even claimed that “It worked” when they met in Pittsburgh, USA.

But as the chart above from Gerring Wealth Management shows, their real successes have been in boosting asset markets.  Weakness in the US S&P500 stock index (blue line) during 2010 led the Federal Reserve to launch its QE2 programme.  Overall (brown line) it has provided $3.5tn of liquidity – approaching 25% of US GDP – compared to the $900bn on its balance sheet (6% of GDP) before the stimulus programmes began.

Now it is increasingly clear that the Fed’s policy has failed:  higher stock markets have not led to increased consumer spending.  So although the S&P 500 has doubled from 2009 to reach record levels, retail spending – 70% of US GDP – remains weak.  As Wal-Mart CFO Charles Holley warned last week, “The retail environment remains challenging in the U.S. and our international markets, as customers are cautious in their spending.”

Wal-Mart is the world’s largest retailer, and so sees what is happening on the ground.  Their view is also confirmed by a new paper from the San Francisco Federal Reserve, which calculates that QE2 added just 0.13% to US GDP in 2010, and that its impact faded within 2 years.

The first real signs of trouble are now being seen outside the US.   Globally, governments have provided $33tn of liquidity since the Crisis began, creating similar asset bubbles around the world.  Thus there is now a growing sense of panic in global financial markets, with India a prime example.  We no longer hear much about ‘Incredible India’: instead, the rupee has fallen to an all-time low against the US$, as investors seek safer investments closer to home.  As Victor Mallet highlights in the Financial Times, these bubbles have followed similar paths:

Q4 may thus be a decisive moment in the history of the Crisis, if the Fed goes ahead with its exit plans.  Will we find the Western economy is now strong enough to stand on its own feet?  Will the emerging economies have successfully rebalanced their economies towards domestic consumption and away from exports?  Or will we find it was all an illusion, like the wealth created by the US subprime bubble?

The blog was given one answer to this question last week from a senior financial executive with one of the world’s largest specialty chemical companies.  He offered the wisdom of leading Austrian economist Ludwig von Mises on the difference between sound economic development and credit bubbles:

“….What is needed for a sound expansion of production is additional capital goods, not money or fiduciary media. The credit boom is built on the sands of banknotes and deposits. It must collapse….” (Human Action, 1960)