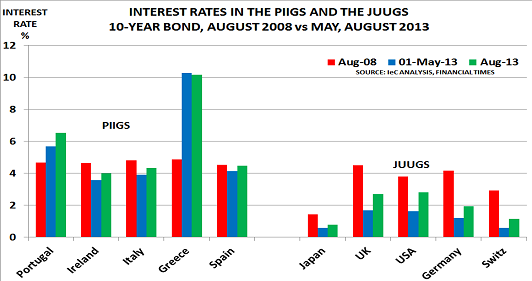 Newton’s 3rd Law of Motion states, “To every action there is always an equal and opposite reaction“.  Thus the forces of two bodies on each other are always equal and are directed in opposite directions.

Policymakers forgot this Law in their response to the 2008 financial Crisis.  Instead they believed that cutting short-term interest rates in the major economies to zero, and thereby reducing 10-year rates, would force investors to make riskier investments and so stimulate economic growth.

5 years later, of course, it is clear there has been no recovery to SuperCycle levels of economic growth, despite  their $33tn of global stimulus.  Instead, as Mexico’s central bank governor admitted at the weekend, the policy simply led to “large short-term speculative capital inflows” – exactly the ‘equal and opposite reaction’ that Newton’s 3rd Law would have predicted.

The chart shows what has happened to interest rates for 10-year bonds over the period.  It shows them in August 2008 (red column) when the Crisis burst, and then on 1 May 2013 (blue), just before policymakers finally began to reverse course.  It also updates the position to last Friday (green).  Its focus is on the weaker European economies (the PIIGS – Portugal, Ireland, Italy, Greece, Spain) and the stronger global economies (the JUUGS – Japan, UK, USA, Germany, Switzerland):

The decline in the JUUGS’ interest rates thus created the basis for the speculative capital outflows that Mexico’s governor identified..

Since May, however, rates in the JUUGS have begun to rise quite steeply.  They have jumped by 60%-75% in Germany, the UK and US; and nearly doubled in Switzerland.  Even Japan’s rates have risen.

Thus it is clear that the Crisis is now entering a new and even more dangerous phase.  The $33tn spent on stimulus is equal to around half of global GDP.  It is hard to see how this debt can ever be repaid, given that it financed a speculative credit boom, rather than the production of useful goods and services.

Policymakers should not have ignored Newton’s Law.  Nor should they have refused to accept the critical learning from Japan, that ageing populations create economies which have low or even negative growth.  These economies also have deflation rather than inflation, for the simple reason that older people no longer buy many new things, as the kids have left home and they already own most of what they need.

As we show in Boom, Gloom and the New Normal, the West is now going through Japan’s experience.  The 1983-2007 SuperCycle saw large numbers of BabyBoomers in the Wealth Creating 25 – 54 age group.  Now the average Boomer is 55 years old, and so the world is entering a New Normal of low or negative economic growth.

Thus as Newton would have predicted, the short-term speculative capital flows are now disappearing:

What happens next is difficult to forecast.  The worst case is that interest rates will continue to rise, as investors head for the exits.  This would likely cause stock and commodity markets to fall, as many investors have borrowed heavily to finance their positions .  Margin debt (their total borrowing) is currently at a near-record $377bn level in New York.  In turn, deflation would be almost inevitable under this Scenario.

Newton, however, would probably not be surprised at seeing his Law confirmed once more.