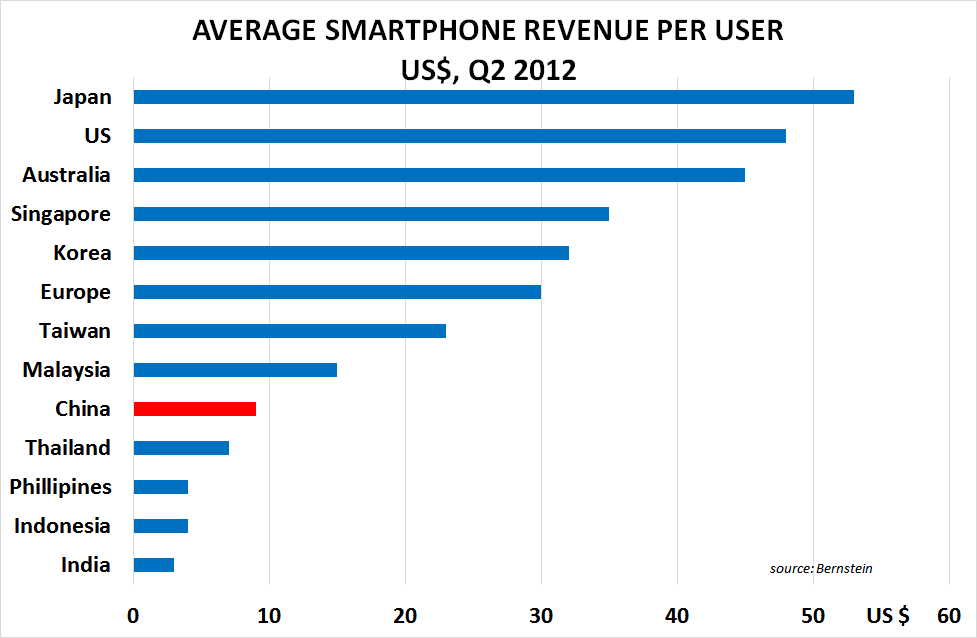 Apple will report great sales this weekend from its iPhone launch in China.  But these cannot disguise its major problem in selling its high-priced iPhones there.  Its difficulties highlight the dangers for those who believe that China has now become a ‘middle-class’ country with most of the population having incomes close to Western levels.

Back in 2010, the analysts were forecasting iPhone 4 sales of 4 – 5 million annually in an addressable market of 50 million.  And in January this year, current CEO Tim Cook was confidently forecasting that China would become Apple’s biggest market.  But since then, the trends have gone in the wrong direction:

The reason is simple – the iPhone is too expensive for the market.   Chinese buyers focus on brands selling below $100, with even Xiaomi’s top range new model selling at just Rmb 1999 ($325).   Apple’s new ‘low-cost’ 5C iPhone is nearly double this price at $733 on Apple’s China website.  And Apple simply can’t afford to cut prices to gain market share, as this would quickly cannibalise global iPhone sales – currently 50% of total revenue.

The chart above from the FT Data blog highlights the key issue.  It shows that wealthy developed countries have much higher smartphone revenues per user.  Japan and the US both saw revenue around $50/user in Q2, whereas China’s revenues were below $10/user.

Equally important as the FT comments, is that “future growth opportunities lie at the cheaper end of the market“.  Smartphones selling for less than $200 are expected have nearly 2/3rds of the global market by 2016.   This is quite a turnaround from a few years ago, when the market was dominated by those selling for more than $400.

Apple is selling a profitable niche product.  But Samsung’s success in China’s smartphone market provides an excellent example of the reason why affordability has become the critical issue as we transition to the New Normal.

TUESDAY UPDATE.  Apple has announced it sold 2m of the new phones in China over the weekend.  This is exactly the same number as it sold last December in the first weekend of the new iPhone 5 launch, when it was already number 6 in the market.

PREVIOUS POST Cotton reserves equal 3 pairs of jeans for every person in the world
NEXT POST US Federal Reserve cuts growth forecast, again