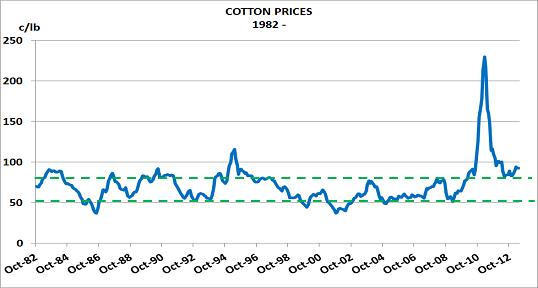 Cotton will be one of the main case studies used by future historians to highlight the failure of post-Crisis policies from 2008 onwards.  It highlights all the key issues:

The comparison with the normal cyclical peak in 1995 is revealing.  That occurred due to a simple lack of sufficient cotton and polyester to meet textile demand:

Today’s market situation couldn’t be more different.  It has been due to government interference in the market – first by central banks and then by China’s government.

Beginning in late 2008, speculators took the cheap money offered by central banks and went on a buying binge in most commodities.   They saw the chance for quick profits, as a V-shaped economic recovery seemed inevitable after the financial crisis. Meanwhile, analyst reports suggested China would likely develop much  higher levels of demand. Cotton market action didn’t disappoint, and the combined influence of these two factors drove prices to an astonishing monthly peak of 230c/lb by March 2011.

Oil prices had similarly rocketed from $30/bbl to a peak of $127/bbl in April 2011 – with equally no sign of any shortages.  This was pure speculative excess, funded by the low interest rates provided by the central banks.

Cotton’s speculative bubble then began to burst, prompting China’s government to then provide direct support to its farmers by buying up surplus production.  As Bloomberg note:

Interestingly, this support began whilst a major drought was occurring in cotton-producing parts of the USA.  In normal circumstances, the drought would have led to shortages and higher prices.  But the distortion caused by the earlier speculation was so great that in fact prices fell sharply, even whilst China continued to build stocks.

More recently, China’s new leadership have changed the policy.  As Barrons noted in June, it began auctioning cotton in January, but with only limited success as “Chinese mills have taken less than a third of the cotton offered through the end of May”.

WHERE ARE WE TODAY?
The textile market has evolved since 1995 with two major changes having taken place:

So we now have a major surplus of both cotton, and PTA/polyester capacity.  Plus there are record levels of cotton reserves, with the US Department of Agriculture reporting, “there are enough inventories to make three pairs of jeans for every person in the world.”

There are certainly no easy options for China.  To protect its own position, and prevent social unrest, it is still buying domestic production at 151c/lb – around 80% higher than current world prices.  But there are two factors currently supporting its position:

But on the ground, China’s policy is self-defeating.  For example, Chinese textile company owner Hong Tianzhu has seen his personal stake in Texhong Textile Group become worth $1bn following his decision to move production to Vietnam.  His business model is simple – he buys cotton in Vietnam, where prices are 75% cheaper, and then sells the finished products in China’s high-priced domestic market.

We all know that it is dangerous to bet against governments and central banks in the short term.  They have so far spent $33tn in support of their policies since 2008, far more than any company or individual can possibly afford.  But this doesn’t mean that the policy will work.

The cotton story thus illustrates all that is wrong with the policies that have been adopted since 2008.  They are doomed to fail, and the costs of failure are already huge.  The problem is that all of us are paying the bill for the market distortion they have caused.