Investors decide central banks may not know what they are doing 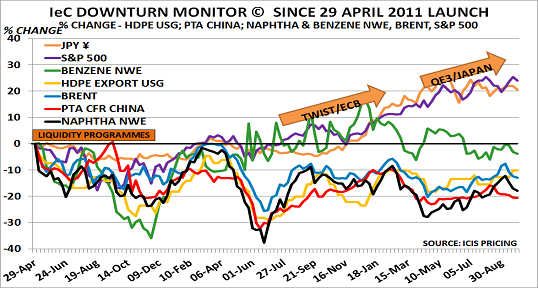 The blog was speaking last week at the major Euromoney investor conference on bond markets.  It followed a keynote by the head of the UK’s Debt Management Office, who noted that the Bank of England now ‘owned’ ~30% of total UK government debt compared to none in 2008

The reaction to his speech revealed just how investor attitudes to the central banks have changed.  All through the day, it was clear that neither the US Federal Reserve, European Central Bank or Bank of England now command total confidence.  Some very large investors privately expressed the view that central banks no longer knew what they were doing.  And they shared the blog’s concern that the outlook could become quite scary as a result.

Also changing is the attitude to the 4 ‘butterflies’ that the blog discussed in its New Statesman analysis last month.  Its argument was that these could cause a cold winter, just as butterflies flapping their wings in the Amazon can cause snow elsewhere:

Markets hate uncertainty, but the major investors with whom the blog spoke were not feeling depressed.  Instead, they were starting for the first time in years to do their own thinking, and not just relying on central bank ‘guidance’.  Encouragingly, they were very interested in the arguments of ‘Boom, Gloom and the New Normal’ – another sign that its argument on the importance of changing demographics is becoming mainstream.

But who knows how all this will end?  Who even knows what will happen to oil prices?  Will the promised US-Iran talks be the trigger for prices to fall back to $50/bbl, or lower?  They could be, if markets turn away from today’s absurd consensus that insists on seeing shortages round every corner.  If investors really do start opening their eyes, and thinking independently, there could be quite a lot of changes ahead.

Meantime however, as the chart shows, the divergence between the real world of chemical demand and the liquidity-driven financial markets is very clear.  All the benchmark products are lower in price, highlighting how the only real ‘recovery’ has been in financial assets.

Benchmark price movements since the IeC Downturn Monitor began on 29 April 2011, with ICIS pricing comments this week are below:

PTA China, red, down 21%. “Slower-than-expected downstream polyester demand weighed down buying sentiment and spot prices”
Naphtha Europe, black, down 18%. “Market is oversupplied, suffering from slow domestic demand and sluggish exports to the US gasoline sector”
Brent crude oil, blue, down 13%.
HDPE USA export, yellow, down 10%. “Following the 2 force majeures, inventory tightness has made it difficult to find product for export”
Benzene Europe, green line, down 4%. ”Prices are at a seven-week low, largely as a result of falling crude, lower demand and a dip in US and Asian spot values”
US$: yen, orange, up 21%
S&P 500 stock market index, purple, up 24%

“Its only when the tide goes out that you learn who’s been swimming nake...

Anyone not closely studying trade data is likely to make some very expensive mis...