Home Blogs Chemicals and the Economy Recovery has been delayed, again

Recovery has been delayed, again 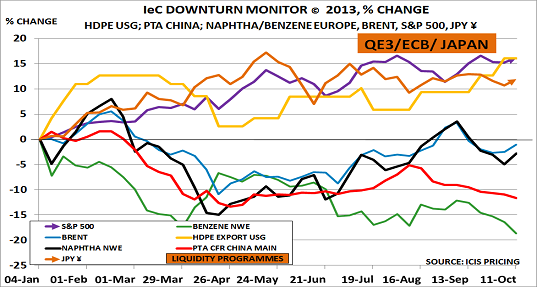 Recovery has been delayed, again.  That is the clear message from the blog’s extensive discussions with key executives in global and regional markets over the past 2 weeks.

In summary as this ICIS video interview suggests, the picture is as follows:

Equally, pressure is now building on crude oil markets.  These have long been decoupled from the fundamentals of supply/demand, but the ICIS market reports below suggest a broad decline in demand is now taking place.  The sequence is easy to follow:

Critically also, we are in October, normally one of the 4 seasonally strongest months for demand in the year (January, March, May are the others).  Plants should be running at peak rates to complete orders before the holiday season arrives.

None of this will come as a surprise to blog readers.  But it is clearly coming as a major shock to financial markets, who have been convinced that recovery had now become inevitable.  The blog’s own conversations with Wall Street analysts, for example, reveal incredulity that this might be happening.  Most have instead been publishing research notes since May that said the precise opposite.

Of course, policymakers also have an easy excuse for their mistake.  They can and will simply blame the US budget/debt ceiling debate, which has also taken them by complete surprise.  Then they will probably also be totally shocked to find that Germany’s new government, as and when it is formed, is not prepared to hand over large amounts of money to bail out Southern Europe.

The butterflies that the blog described in its August New Statesman article are now flapping their wings very hard.  Please be careful out there.  It is already getting quite scary.

Benzene Europe, green, down 19%. ”Q4 was previously expected to see some bullishness, owing to several cracker turnarounds and feedstock limitations, but this has so far not emerged”
PTA China, red, down 12%. “Market players questioned why Asian PTA producers still tried to maintain operations amid negative margins and poor demand”
Naphtha Europe, black, down 3%. “A sharp fall in refining margins was lending support to the idea of further run cuts across NWE refineries, which might result in reduced naphtha supply”
Brent crude oil, blue, down 1%.
HDPE USA export, up 16%. “US prices going to Brazil are not competitive with product from elsewhere….markets elsewhere that would normally received product from the US are sourcing with products from other countries such as South Korea.”
US$: yen, orange, up 12%
S&P 500 stock market index, purple, up 16%