“We really see retirement as the next big financial crisis” 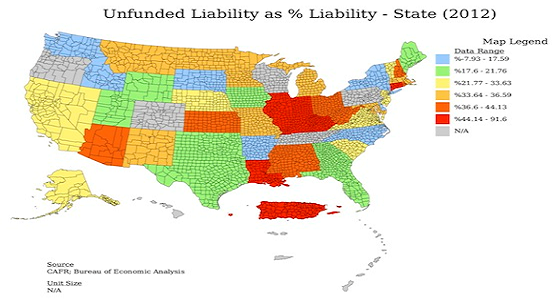 How much money will you actually get when you retire?  And how secure will that income be?

“We really see retirement as the next big financial crisis,” says Barbara Novick, vice chairman of BlackRock,  the world’s largest money manager, with $3.86 trillion in assets. “The longer we don’t address it, the bigger it gets.”

It is also a very difficult area to track.  So the blog tips its hat to John Maudlin, who has been examining the position with regard to state and city pension funds in the USA with the assistance of Lumesis.  Three key conclusions emerge:

Maudlin’s chart above shows today’s reported level of each state’s unfunded pension liability as a percentage of its total liability.  In other words, if a state pension fund claimed to be fully funded, it would be 100%.  Sadly, only those few marked in blue are anywhere close to this, being between 8% – 18% unfunded.  Those in green are 18%-22% unfunded.  Those in red are >44% unfunded.  When the new rules are implemented, the position will be far worse.  Texas today is shaded green, for example.  And, of course, these figures do not include healthcare costs.

The sad conclusion is that most state pensioners will not get the pension they are expecting.  Equally likely is that taxes will rise in most states, in order to help make a bad position less bad.  Overall these developments will reduce the total amount of cash that people have to spend.  Detroit’s application to freeze pensions, and the accusations of fraud, are likely just the first of many such situations.

Nor will this affect only a small number of people.  We don’t know the number of state pensioners, but we do know that 65m Americans are already over the age of 60, one in five of the population.  In 10 years’ time, the over-60s will be one in four.  By then, latest official estimates suggest Medicare will be about to run out of money, followed by Social Security in 2033.

Consumption is 71% of US GDP.  It is therefore wishful thinking for any policymaker to argue that GDP growth can possibly go back to the SuperCycle levels, given the outlook for pension income.  Ageing American Boomers not only don’t need to buy all the things they bought when their families were growing up.  They also can’t afford them.