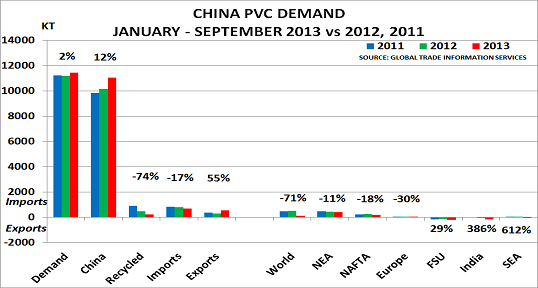 China’s new leadership have a double task as they head into Saturday’s critical economic plenum, which will decide policy for the next 10 years.  On the one hand they have to avoid the appearance of crisis, and ‘keep the show on the road’.  It would be fatal to allow their agenda to be hijacked by a perceived need to rescue the economy.  On the other hand, they have to push through the changes that are essential for China’s prosperity.

As premier Li put it last week. “Growth is to be achieved through reform. There is plenty of room to promote reforms. Without reforms, there’s no way out.”

This is not an easy task.  But as often happens, trade data from Global Trade Information Services helps us to understand the key issues.  The chart shows developments on PVC, a key real-time indicator for China’s housing market:

This confirms the story that began to appear in Q1.  This is that economic reform requires growth to slow, and for the focus to move away from housing markets – PVC is, of course, mainly used in this area for water pipes, windows and cables.

It also confirms that employment remains a high priority.  Thus domestic production is increasing, even though it is high cost, mainly carbide production from coal.  Imports from low-cost areas such as the USA are thus reducing.  Whilst China is also becoming more active again in export markets, as the blog discussed last month in Turkey.

Thus at the end of the day, continuity with Deng’s message from his 1992 southern tour is the critical policy for the new leadership.  They have to keep living standards rising, if the Communist Party wants to remain in power.  Economic drivers such as cost are irrelevant if they conflict with this imperative.

Anyone planning new US investments based on expectations of different priorities will end up being sadly disappointed, and out of pocket.

The blog is busy preparing its presentations for its World Aromatics and Derivat...

We are now into the seasonally weaker selling part of the year for US auto marke...