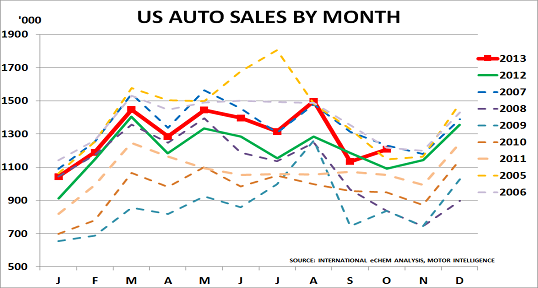 We are now into the seasonally weaker selling part of the year for US auto markets, as the chart shows.  The big months for volume are always March – August, and then sales slow until December – when manufacturers offer ‘special deals’ to boost their annual numbers.

On this basis, October seems to have been a reasonable month with volumes (red square) bouncing back against 2012 levels (green line).  Seasonally adjusted volumes were similar to September at 15.2 million, but below the 16m level seen in June and August.  But combined September/October volume was up just 3% versus 2012, suggesting a slowdown versus the 8% level seen overall in January-October.

Another cautionary note is the dominance of pick-up truck sales, which took the top 3 positions in terms of individual model sales, and were 11% of total October sales, confirming industry comment about the importance of demand from smaller home-builders.

Industry analysts Polk see the same trend in the commercial auto market, where sales are up just 2% overall in the January – August period versus 2012.  Sales to large fleet operators have been relatively weak, with volume growth instead concentrated in fleets of 5 vehicles or less.

This seems to support last month’s conclusion that the market is not seeing the broad-based expansion that was typical in the SuperCycle.  Instead, a number of ‘hot-spots’ are developing, which may then disappear again as conditions change.

This confirms the blog’s sense that Agility has become a critical success factor.  Companies able to develop their own VUCA (Vision, strategic Understanding, Clarity over implementation and Agility) will be the winners in today’s far more volatile, uncertain, complex and ambiguous markets.

China’s new leadership have a double task as they head into Saturday’...

Another 3 months, another decline in global smartphone sales. And more pressure on mid-market player...

10 years ago, I took a look ahead at what we could expect in the next decade, as discussed last week...

If you don’t want to know the future, look away now

Next week, I will publish my annual Budget Outlook, covering the 2021-2023 period. It will highlight...