Ethylene demand weak as eurozone flirts with recession and deflation 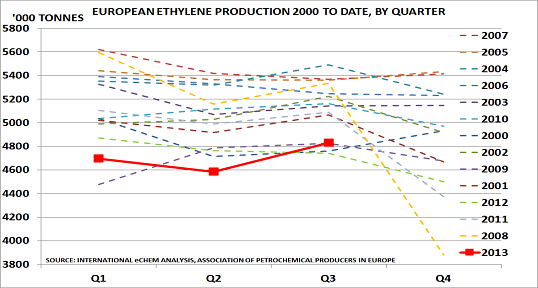 We already know that Q4 will see no recovery.  Dow have announced the temporary closure of their Tarragona cracker in Spain from 1 December because of “challenging market conditions and an unclear demand picture”.  Whilst ICIS polymer expert Linda Naylor noted “this is not the end of the year that many players had envisaged”.

It thus appears markets are indeed following the path forecast by the blog at the beginning of Q4:

The other worry is that the Eurozone seems to be slipping back into recession, whilst deflation is looming.  2014 could be a very tricky period indeed.