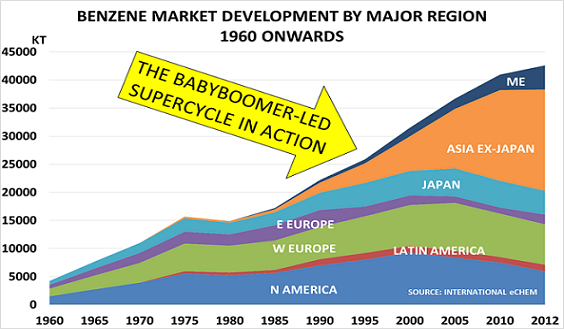 Benzene has always been one of the blog’s favourite leading indicators for the global economy.  The reason is simple, in that it has been around a long time, and is now used in a very wide range of industries.  So it provides us with a broad-based picture of the global economy.

The chart above highlights another important factor, that we have a continuous history of its production going back to 1960, when oil-based production first became a major source of supply*.  Before this, coal had been the feedstock.  It shows:

The oil price is clearly a major headwind, which will probably only prove temporary.  History shows that the economy simply cannot support oil prices above $30/bbl.

But the loss of demand as the Boomers move into their New Old phase will likely prove a long-lasting constraint on growth.  The world has never before seen large numbers of people in this generation – life expectancy in 1950 was still only 47 years, compared to 70 years today.  And in the wealthy Western countries, the New Old are already 35% or more of the adult population.  They don’t need to buy many new things, and their incomes are declining as they enter retirement.

The benzene market thus provides a valuable snapshot of economic development over the past 50 years.  It also suggests it is unlikely that stimulus programmes can overcome the impact of the major generational changes now underway in the global economy.