Quantitative Easing – where it all went wrong 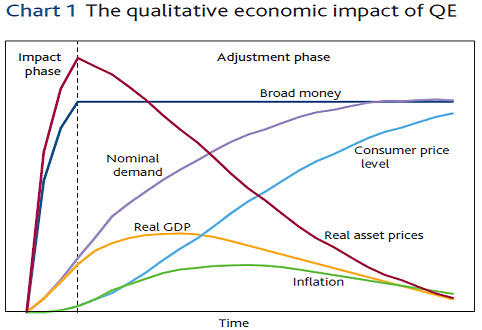 Back in September 2011, the Bank of England published the chart above to show how it expected Quantitative Easing (QE) to revive the UK economy*.  It argued:

“How does the economy adjust to asset purchases?
“The overall effect of asset purchases on the macroeconomy can be broken down into two stages: an initial ‘impact’ phase and an ‘adjustment’ phase, during which the stimulus from asset purchases works through the economy, as illustrated in Chart 1.  In the impact phase, asset purchases change the composition of the portfolios held by the private sector,…(and) asset prices are bid up….. Through lower borrowing costs and higher wealth, asset prices then raise demand, which acts to push up the consumer price level.

“In the adjustment phase, rising consumer and asset prices raise demand …. until the price level has risen sufficiently to restore real money balances, real asset prices and real output to their equilibrium levels. Thus, from a position of deficient demand, asset purchases should accelerate the return of the economy to equilibrium.”

The theory is that the government’s role is to increase asset prices and create inflation – particularly in financial and housing markets.  And the red line in the chart shows this revival happening sharply and quickly via the QE process of printing money and other stimulus measures.

Regular readers will immediately recognise this as paralleling the argument put forward during 2009/10 in the US for ‘escape velocity’.   Thus Ben Bernanke, US Federal Reserve Chairman wrote in November 2010 that:

“Higher stock prices will boost consumer wealth and help increase confidence, which can also spur spending. Increased spending will lead to higher incomes and profits that, in a virtuous circle, will further support economic expansion”

The key word in this sentence is “can”.  As in, maybe it can and maybe it can’t.  Or, to put it another way:

As everyone (seemingly except policymakers) knows, people spend much less and their incomes fall as they retire.  So unless QE can somehow change human nature, then the policy can’t work.

This is confirmed, of course, by the reality of developments since 2009, compared to the theory of the chart:

But it hasn’t worked out that way.  2 years after the chart was published, things have turned out just as demographics would suggest.  GDP, demand and consumer prices have all remained weak, whilst government debt has grown exponentially due to the costs of QE.

But unfortunately, central banks still refuse to accept the common sense argument that demographics drive demand.  They are instead still continuing with the original misguided policy.

In turn, this raises the very serious question of how all the debt they have created can ever be repaid, given the impossibility of returning to SuperCycle growth levels.

*Thanks to John Mauldin and Toby Mangle for spotting this chart