Demand now the key driver for future US petchem profitability 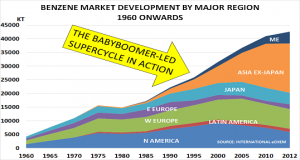 Will the US be able to sell all its planned new petchem volumes?  That is the 3rd topic in the blog’s series about critical areas where we all think we know what’s happening, but may end up being surprised.

We all know that the US now has a major feedstock advantage versus Europe, Asia and Latin America due to the arrival of shale gas.  We also all know that it is planning at least 10MT of new ethylene capacity, plus derivatives, as well as up to 3MT of new propylene capacity.  What could go wrong, we ask ourselves?

One obvious risk is the outlook for crude oil prices, as discussed in the 2nd post in the series.  But lets leave this to one side.  And lets also ignore issues of cost inflation and labour availability, and assume these can somehow be solved over time.  The real challenge for a resurgence of US chemical exports is the one that nobody ever talks about.  Where will all this new product be sold?

This comes down to the change in mindset that is slowly starting to take place in the industry.  We are all, like it or not, used to a world where supply has been the chief driver for the business.  Other factors like manufacturing excellence, logistics, commercial skill and finance are all critically important.  But the whole history of the industry till now has been based on the idea that if you build a plant, then someone will appear to buy its product.

The chart shows this history in action for benzene, probably the most widely traded of all chemicals since the industry moved to be based on oil from coal in 1960:

During this period, some intrepid pioneers (many in the original Founders Club) also set out on export missions to countries which had yet to develop their own petchem industries, but wanted to benefit from cheap Western production.  Over time, this came to provide important additional volume for the existing plants.

Fast forward 10 – 15 years, past the 2 oil crises of 1973/5 and 1980/5, and we arrive at the start of the off-shoring trend.  The Boomer-led demand SuperCycle created a need to expand production overseas, as countries then described as being in the ‘3rd World’ began to develop export-led models of economic growth:

So market growth occurred, but it was taken up by domestic supply being established in countries where demand growth was strongest.  Governments saw petchems as a ‘strategic industry’ that supported large numbers of downstream jobs in textiles and other important industries.

Nobody really minded this development back in the West or Japan, as companies were often still involved in the activity either via building their own plants in the regions, or by supplying technology.  It seemed a perfectly logical way to go – and anyway, nobody thought it sensible to try and supply large volumes across thousands of miles.  Bad weather, port congestion and other delays can easily add up to a month to planned shipping schedules – and cause downstream plants to shutdown till new raw materials arrived.

This is therefore the business model developed over the past 50 years, and it seems unlikely to change now.

Of course, the planned new US plants will certainly benefit from the reshoring that is now taking place of manufacturing from Asia to the West.  As the blog noted back in June, global supply chains are now going out of fashion very quickly:

When historians look back, they will thus probably acknowledge that the crucial role of shale gas was to be the catalyst for this change in manufacturing models.  Of course today’s gas prices reduce US manufacturing costs, but the fact that reshoring is also happening at great speed in Europe as well shows that this is not the critical factor.

So where does that leave all these planned new plants?  The early movers, particularly those who have done simple and cheap debottlenecking, will do very well.  There will undoubtedly be a net gain in US domestic demand – despite the end of the SuperCycle – as more product is made locally.

But reshoring doesn’t create new demand.  Every tonne or pound or gallon of product demand reshored to the US means the same volume is no longer required where it was previously being produced.

So emerging country producers have an increasing hole in their own supply/demand balance.  They either have to grow domestic demand, or export.  The last thing in the world that a government like China’s will do is to shutdown plants, because this would lose jobs.  And they can’t possibly allow this to happen, when they are already seeing their exports slow.

As premier Li Keqiang said in October, China’s exports currently account for 30m jobs directly, and 100m indirectly.  In his view, a trade war is already underway.  And he made it clear he was going to fight his side, not give up at the first sign of battle.

Anyone who doubts this has only to look at polyethylene trade data over the past few years.  The US may have the 2nd cheapest production in the world, and China may have the most expensive production.  But US exports to China have still fallen from 1MT in 2009 to around 300KT today, and show no signs of recovering.  Whilst China continues to build more capacity, to help support its job creation strategy.

Thus to everyone’s surprise, we may well find out that supply is no longer the critical factor when considering new plant economics.  In the New Normal, access to demand will create the opportunity for sustained profitability.