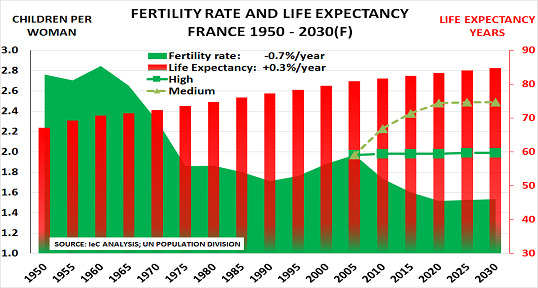 France, with GDP of $2.6tn, is the 5th and final profile in the blog’s series on the impact of ageing populations on economic growth.  Its importance lies not just in the size of its economy, but also in the fact that its relationship with Germany has been the driving force behind the European Union and the Eurozone.

France is also interesting as it is one of the few Western countries which actively encourages women to have more children. It provides major incentives including monthly allowances, 3 years paid parental leave and subsidised day-care.  The cost of these is large and rising, having reached 15% of the nation’s budget back in 2005.

The UN Population Division’s forecasts for future fertility rates thus show major variation as the chart above demonstrates, as it is impossible to know if the policies will prove successful:

One success for the policy has been that France saw its birthrate pass Germany’s in 2000 for the first time in modern history, and it is now 18% higher at 790k births/year.  But this is mainly due to the decline in Germany’s birth rate.  And  in terms of economic growth, these new babies will only begin to have an impact once they reach the Wealth Creator 25 – 54 age group.

Thus the key issue for the next 10-20 years is the legacy of the declining number of births after 1972’s peak of 880k/year.  France’s recent policy shifts will not change the fact that its current BabyBoomer population is ageing fast.

As the new OECD Pension  Book highlights, 30% of the working age population are already over 65 years.  Yet remarkably, France has been reducing its pension age to 60 years – even whilst its life expectancy was rising.  Reforms passed in 2010 are slowly reversing this policy, but pension age will still be only 62 in 2017.

Thus the OECD calculate that gross pensions are nearly as generous as in Germany at 48% of median earnings.  The problem is simply that they are unlikely to be affordable for much longer:

France is thus a useful example of how governments have chosen to ignore the reality of ageing populations, due to their focus on the short-term electoral cycle.  There has been no debate about whether it is medically and mentally better, or worse, for people to retire at an early age.  Nor has there been a debate about the wider economic costs.

The result is that we face an economic and social crisis, for which there are now no ‘easy solutions’ available.  20 years ago, it would have been relatively easy to index pension age to life expectancy.  Most people would have complained a little, but then shrugged their shoulders and got on with their lives, on the principle that ‘what you never had, you never missed’

But that is not the position today.  As investment magazine Barron’s observed about the US’s failure to properly address its pension issues:

“It is difficult enough to put 50-year-olds on notice that entitlements they expect at 70 will probably not be available. To give them this bad news when they’re 60 or 65 is inhumane.”

German New Olders have cash to spend, but few companies bother with their needs

Every parent believes their children are above average – more beautiful an...